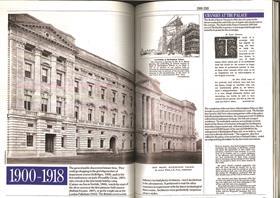 This month marks 101 years since the completed refurbishment of the east front of Buckingham Palace, the last major building work to take place on the London landmark. Completed in 1913, the building’s refronting occurred during the reign of King George V, and brought an end to 60 years of refurbishment work. In an article published 14 November 1913, Building - then The Builder - applauded the speed of which the construction of the public-facing front of the palace was built, taking just 13 weeks to complete. It said: “Sir Aston Webb’s original suggestion was that the work should be carried out in two years, as the work could be carried on only for three months in each year; but after going into the matter Mr. Shingleton undertook that his firm should carry out the work in thirteen weeks.

“One hundred and three thousand cubic feet of stone was delivered from the quarries, weighing over 6,000 tons, and from beginning to end of the work 800 men were employed. Most elaborate plant and scaffolding was used to enable the work to be carried out in the time. There were six derrick cranes and five electric hoists, and two Waygoods’ passenger lifts were also used.”