As the outcome of the EU referendum is revealed, we revisit 1961, the year prime minister Harold Macmillan announced the UK would be applying for membership to the European Economic Community 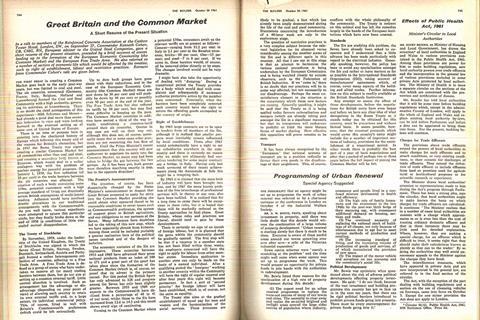 Great Britain and the Common Market

As the outcome of the EU referendum is revealed, we revisit 1961, the year prime minister Harold Macmillan announced the UK would be applying for membership to the European Economic Community. The UK would eventually be blocked from joining the other six countries - Germany, France, Italy, Belgium, Holland and Luxembourg - that made up what was known as the Common Market on this occasion, with the application being vetoed by French president Charles de Gaulle.

At the time of Macmillan’s application, Building ran excerpts of a talk to members of the Reinforced Concrete Association, where commander Kenneth Cohen, European adviser to United Steel Companies, explained how the UK would be affected by the treaties of the Common Market.

He said: “There is certainly no sign of an inrush of foreign labour, but it is planned that the gates within the community should be gradually opened. The first step will be that if a vacancy in a member state has not been filled within three weeks, the employers concerned will have the right to apply for labour from other member states. Immediate application to another state can only be made on the basis of a named individual. After a qualifying period the ‘foreigner’ working in another country within the community will have the right of regular renewal and after four years this right will become permanent.”