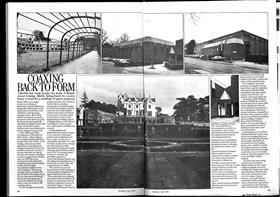 Coaxing back to form

In a week that has seen the UK’s football nations embark on international duties, we cast an eye back to April 1981, when Lilleshall Hall became a training centre for British football. The hall was residence of the Football Association’s School of Excellence until 1999, and served as a model for future club training centres. Its star pupils during its tenure included Michael Owen, Joe Cole, Sol Campbell, Jemaine Defoe and Andrew Cole. Lilleshall Hall was profiled in Building by Martin Spring, who discussed not only adding the facilities that transformed the 1831-built country retreat into a epicentre for British sport (governing bodies of cricket, rugby league and rugby union, badminton, hockey, lacrosse and netball have all used the facilities), but also the renovations needed to the building itself after an accident on site. He wrote: “As extensions were being carried out to the Queen Elizabeth Hall, the site crane collapsed straight across the building, destroying most of the superstructure. Paradoxically this stroke of bad luck turned out to be a piece of good fortune, as it meant that the entire hall could be rebuilt to improved and more appropriate specifications on the insurance claim of the disaster.”