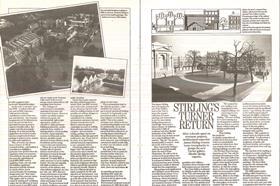 The long-awaited Tate Modern extension opened last month and was an instant hit with the public. This week’s archive takes a look back to 1981, when Tate Modern’s sister gallery Tate Britain was planning an extension. After a decade overseas, “architectural superstar” James Stirling returned to London to design the new Clore Gallery. The gallery would house the collection of works by JMW Turner, Martin Spring reported: “The Clore Gallery is planned by Stirling to abut the east side of the Tate and extend into the site at present occupied by a military hospital. It is designed as an L-shaped block stretching between the Tate and the front lodge of the hospital, which is to be retained.

“What Stirling has produced is a quirky composition of architectural elements all of which are unmistakably modern but which draw their cues entirely from the two existing buildings on either side - the Portland Stone baroque classicism of the Tate and the red-brick Wrenaissance of the hospital. The main walls of the new gallery are composed of square stone-boarded panels with stucco infill. The stone borders, as with the cornice above, reflect the main gallery, while the stucco panels, which will be coloured ochre and terracotta, allude to the lodge.”