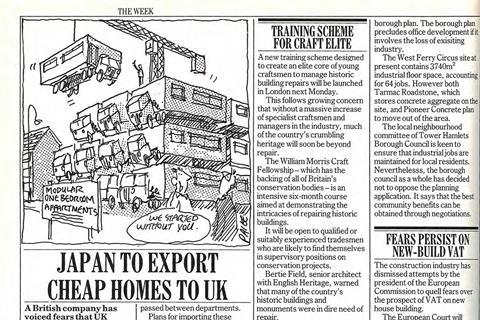 As the UK housing crisis worsens, modular housebuilding is often suggested as an answer, although it has failed to gain significant traction.

However, in 1986 there was concern that the market would be flooded by hyper-efficient cheaply produced Japanese imports, brought over on supertankers. John Prewer, director of Domain International, a company that had developed its own manufactured housing units, told Building reporter Alastair Stewart that top Japanese companies were “planning to do to UK housebuilding what Japan did to the UK car industry in the 1970s”.

“Unlike Britain, the Japanese make planned co-ordinated attacks on certain market areas, be it motor cycles, videos or whatever,” Prewer warned.

As business is booming for UK housebuilders and we don’t have enough places to live, it looks like this is one market raid that may have fallen short.