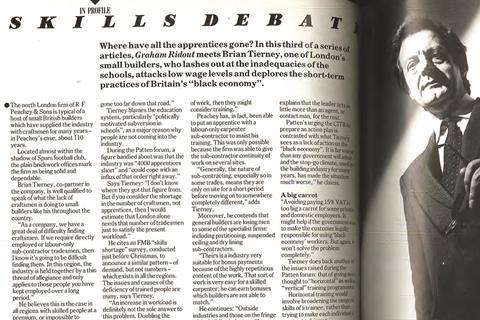 National Apprenticeship Week begins on 6 March and our cover story reports big business’ fears about the cost-effectiveness of the all-industry apprenticeship levy, which is being introduced at a time when construction has lost “an estimated quarter of a million workers over the past five years since the downturn”, and is facing a possible drop of 20%-25% in the numbers of those left during the next decade.

Concerns haven’t changed hugely in the last 30 years: “Where have all the apprentices gone?” asked Graham Ridout in an interview with London builder Brian Tierney of R F Peachey & Sons, who railed on behalf of small businesses.

Tierney says he has a “great deal of difficulty finding craftsmen” and notes that the offical government figure for the shortage is given as 4,000, but he calculates that “London alone needs that number of tradesmen just to satisfy the present workload.”

He believed that apprenticeships needed to be better paid and that far more effort was needed to sell the industry to parents, teachers and schools.

Finally, he asks: “Is it right that the building industry pays to train its apprentices?”

A question that surely would have plenty of response if it was asked today.

To read the full article from 27 February 1987, download the PDF below