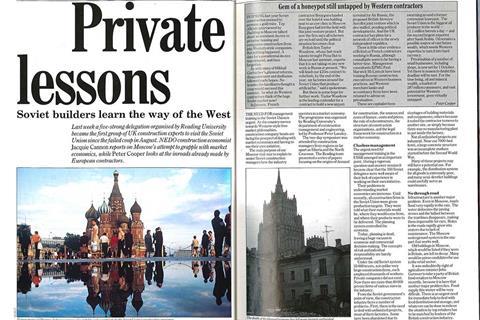 This week in 1991, a delegation led by Reading University went to Moscow to teach Soviet builders the way of the West.

Jacquie Cannon reported: “As the country moves towards Western-style free market philosophies, construction company heads are facing the prospect of dealing with market economics and having to use their own initiative.

“The main purpose of our Moscow visit was to explain to senior Soviet construction managers how the industry operates in a market economy.

“Their problem in understanding market economies are immense. Until recently, all construction firms in the Soviet Union were given production targets. They were told what their materials would be, where they would come from, and where their products were to be delivered. The planning system controlled the economy.”