Construction of the £42.5m Royal Armouries Museum in Leeds gets underway 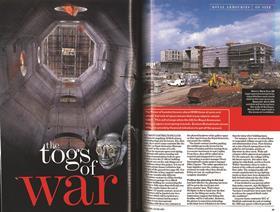 The togs of war

Twenty years ago, work began on the £42.5m Royal Armouries Museum in Leeds. The project was started as a secondary outlet for displaying some of the Tower of London’s 30,000-strong inventory of arms, armour and artefacts, many of which had remained off display due to lack of space. When construction of the museum was initiated, the project was unusual not only for its need of exhibition space, nor its requirement to house animals intended to be part of museum demonstrations, but in the fact that it was one of few private finance initiatives to get off the ground at the time. Then there was also the contract’s uncommon make-up. Analysing the building’s inception, Building reporter Graham Ridout said: “Not many contracts include bill items for supplying 10 birds of prey, six hunting dogs and six horses. But, then again, there aren’t many contracts like the £42.5m Royal Armouries Museum being built in the centre of Leeds. When the museum opens next spring, the animals will enliven hunting and jousting demonstrations held on open ground next to the 27,400m2 building. Animals are not the only things out of the ordinary about this project. It is also a collective of four separate contracts - each one considerably different.”