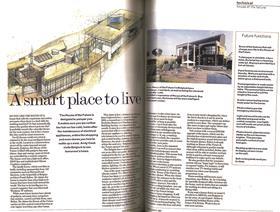 A smart place to live

In 1997, the smartest place to live was Belgium. Specifically: Brussels, home to the House of the Future, a £2.2m residence purpose-built to showcase the most forward-thinking domestic products that its designers predicted would become a staple part of every family household. Such innovations included a toilet with a cleansing water jet (drying provided by a hot-air blower), desktop projectors used to display art and clocks on the wall, and self-rocking beds. Building reporter Andy Cook visited the house, and said: “For £2.2m you could own what is claimed to be the most intelligent house in the world. Located in a characterless street off the main ring-road around Brussels, Belgium, the House of the Future is filled with gadgets that save labour, time and energy, most of which are controlled by a central computer. The house even has a high-tech office, ISDN line and sophisticated Silicon Graphics computers. The family house, which cost £6m to build, including sponsorship from 122 companies such as Microsoft and Siemens, is the brainchild of Belgian architect Frank Belien. He claims the house is smarter than other high-tech homes that have been around the world. The key to its intelligence is a central computer that uses Microsoft Windows ‘97 software.”