This week, 20 years ago, the UK was preparing for a general election 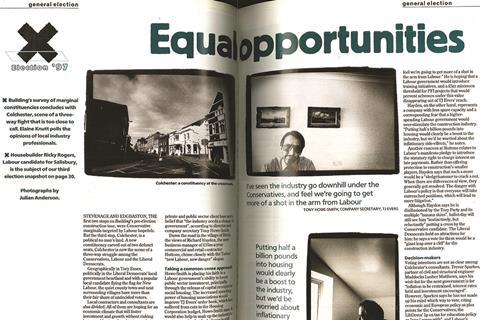 As voters gird their loins in preparation for the general election, or attempt to ignore it altogether, we take a look back to 1997, as the long hard of slog of general election campaigning was coming to an end.

Building visited Colchester to see which way local industry would be voting, describing the constituency as “a political no-man’s land” because the Conservatives, Labour and the Liberal Democrats were all in with a chance.

Tony Howe-Smith, director of contractor TJ Evers, wanted a Labour government, which he thought would boost investment through “the release of capital receipts for social housing”. “I’ve seen the industry go downhill under the Conservatives and feel we’re going to get more of a shot in the arm from Labour,” he said.

However, Richard Hayden of Huttons was worried about the “inflationary side-effects” of Labour’s potential to spend, despite what he called the Tory party’s “banana skins”.

Come election day, neither construction man’s choice won, with Colchester taken by Bob Russell of the Liberal Democrats until 2015, when it was once again flooded by the blue tide that has traditionally submerged Essex.

To read the full article from 25 April 1997, download the PDF below.