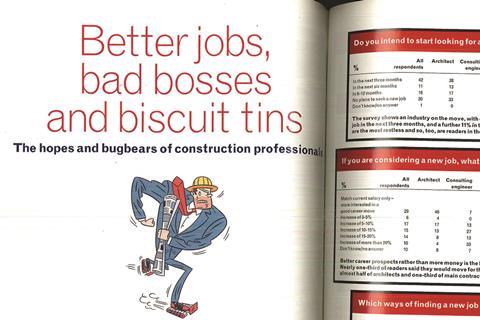 By this time in 1997, election fever was over and the industry had begun to think about its everyday concerns again - something I’m sure many of our readers will be slightly envious of as the battle of party manifestos rages around us, with promises of housebuilding lobbed around like grenades.

A survey of “hopes and bugbears of the construction industry” polled readers’ attitudes to their work and the results were far from happy, with 42% hoping to move job by August. Consultant engineers (47%) were the most restless. Poaching was rife, with 40% of respondents having been approached by rivals or headhunters in the last six months. A company pension and company car were the coveted benefits, far above gyms or canteens – so nothing’s changed there.

As in our archive piece last week, the biggest winner on the job satisfaction was more time off, with early departure on Fridays desired by 76% of workers, and nearly half wanted a Christmas shopping day. Biscuit tins, unsurprisingly, were not the big job satisfaction improver employers hoped.

To read the full article from 23 May 1997, download the PDF below