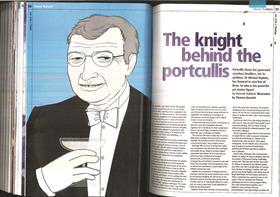 The knight behind the Portcullis

This week, Building looks at the efficiency of Portcullis House 15 years after its grand unveiling. But when it first opened its doors in 2001, the building received a rough treatment from both the press and the public, with critics quick to pillory its appearance. The office for MPs had also become mired in cost overruns.

Shortly after its opening, reporter Hannah Baldock looked into the career of the project’s architect Sir Michael Hopkins, a man often cut as an elusive figure, and one who was far more accustomed to being lauded for his work.

She said: “The signs are that he [Hopkins] is wise to let the dust settle on Portcullis House. Already a growing body of opinion predicts that once the furore over the cost has died down, people will start to appreciate the building as an exemplar of environment-conscious design, and an object lesson in structural integrity.

“Although MPs continue to wring their hands over accusations that they have been profligate with public money, Hopkins has been largely exonerated from blame for the cost overruns, which have been attributed to bungled procurement, unforeseen construction contingencies and inflation. It seems he will walk away from the project with his reputation intact, as well as fees calculated as a percentage of the inflated construction cost.”