Four remaining bidders for the role of Olympic delivery partner for the London 2012 Olympics were given their last chance to bag the £5.2bn project 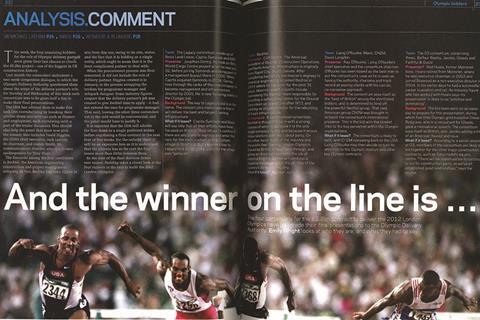 And the winner on the line is …

As Rio 2016 gets off to a roaring start, with Great Britain taking its first gold medal on Sunday, we head back to 2006, when four remaining bidders for the role of Olympic delivery partner for the London 2012 Olympics were given their last chance to bag the £5.2bn project.

“The bidders partook in a two-week competitive dialogue where they were questioned about the scope of the role, but next would be their half-a-day slot to make their final presentation,” wrote Emily Wright.

“The [Olympic Delivery Authority] has advised them to make this task less overwhelming by breaking their pitches down into sections such as finance and employment, each correlating with a part of the tender document. This should also help the panel that must now pick the winner.

“The favourite among the four candidates is Bechtel, the American engineering, construction and project management company.”

However, the role would eventually go to CLM, a joint venture between CH2M Hill, Laing O’Rourke and Mace.