Building’s contributors put their culinary skills to the test 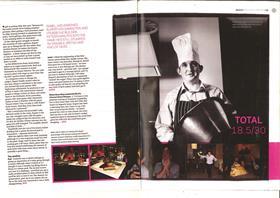 Over the years, Building’s Christmas stunt has become as much a staple of the festive season as overeating and board game brawls. This year’s Lego building keeps up a tradition that has previously seen industry members join in with ballroom dancing, charity singles and bake-offs. One firm favourite was Building’s take on the Come Dine With Me format in 2009. Keen to test the culinary skills of the sector, Building contributors Isabel McAllister, Richard Steer and Rupert Choat were each given the chance to play dinner party host. While all three evenings went smoothly, there was controversy in Rupert not hosting his night at home, but instead at Cameron McKenna’s hospitality lounge, and with plenty of extra help. As the review of his evening begins: “Rupert’s first task, as the guests arrive at Cameron McKenna’s headquarters, is not to pour the cheekily named Ki(e)r Royale cocktails that kick off his construction menu. No, as you would expect, Rupert has people for that. Instead, he must vigorously defend his right to host the meal at his office, rather than his home (assuming he has one). ‘I’m merely subcontracting, in the best traditions of the industry!’ he protests. ‘I’m getting people who are good at this sort of thing to help me out, so I can concentrate on the parts of the evening I do best.’”