One year ago, Building was publishing tributes to one of the greatest and most recognised architects of her generation 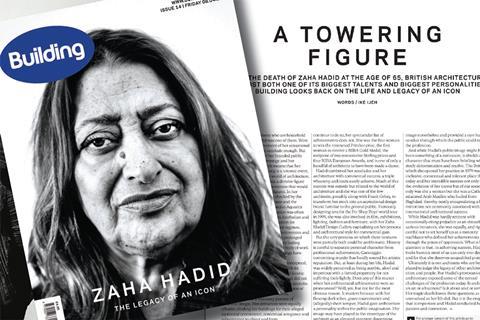 Zaha Hadid: The legacy of an icon

This time last year, Building was publishing tributes to one of the greatest and most recognised architects of her generation – Zaha Hadid.

Hadid had passed away the week before at the age of 65, after suffering a heart attack on 31 March 2016 while in a Miami hospital being treated for bronchitis. Not only were the architecture community and the built environment sector sent into a state of shock, but her death made headlines in the mainstream media across the world, such was Hadid’s profile. This was the first focus of our architectural correspondent Ike Ijeh in his article appraising her life and career, noting: “There are few architects who are household names. Zaha Hadid was one of them.” He later added: “Her tragic and unexpected passing is a totemic event, both within and beyond the world of architecture.”

There were further tributes from the architectural profession, not least from other women architects for whom she was both inspiration and contemporary. “Dame Zaha Hadid was an inspirational woman, and the kind of architect one can only dream of being,” wrote RIBA president Jane Duncan. “The world of architecture has lost a star.”

To read the full article from 8 April 2016, download the PDF below