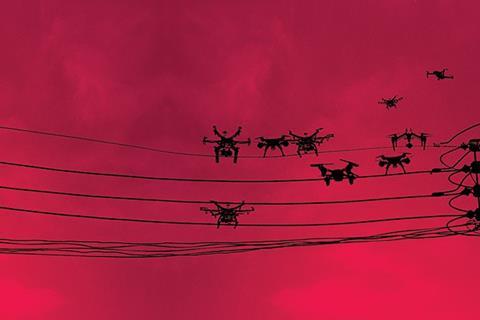 This sinister image of drones hovering in the distance sums up the main question of this piece: will a drone take my job?

The answer wasn’t clear cut and hasn’t got much more defined in the past year. We found many benefits of using drones –  “Looking back at when I was on the slipform for Canary Wharf, using a drone instead of dangling off the 45th floor for an as-built inspection would have been much more useful, and less dangerous,” said RICS land group director James Kavanagh.

Their potential to reduce the number of people worried some but Al Wessing pointed out that the economic benefits of using the technology were undeniable. ”If you are trying to understand the state of a 1 million ft2 industrial building, do you rely upon a whole team or three people who can map without a portfolio of cranes?”

Iain Parker, partner at Alinea Consulting, was positive: “We do not see many (if any) surveyors becoming obsolete.”

Whatever the outcome, the view was that drones were here to stay. “It’s not a fad. Drones are not going to go away,” concluded Kavanagh.