Photovoltaics to provide 12% of Europe’s electricity by 2020 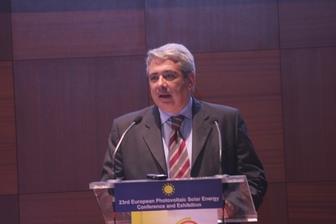 The European photovoltaic industry is set to provide 12% of Europe’s electricity by 2020.

The target was agreed upon at a meeting of the European Photovoltaic Industry Association in Valencia, attended by over 4000 scientists and representatives from 750 companies.

The draft UK Renewable Energy Strategy suggests that the figure photovoltaics would provide by 2020 amounts to less than 1% of our total energy demand.

Clearly the UK has a real opportunity to use photovoltaic solar technology to reach its European targets if the proper legislative support is provided.

Head of on-site renewables with the Renewable Energy Association (REA), Andrew Cooper, remarked: “Clearly the UK has a real opportunity to use photovoltaic solar technology to reach its European targets if the proper legislative support is provided”.

The REA is sponsoring an amendment to the Energy Bill which would provide a production tariff to support the growth of renewable heat and electricity, a principle already common in other European countries such as Germany, Italy and Spain.

Cooper continued: “Of course the real advantage of people using renewables to generate their own electricity and heat is that they will have a real stake in the government achieving its renewable energy targets. They will not simply be helpless consumers of energy but generators in their right and part of a growing energy generating democracy. That would be the real prize of a strategy that provided genuine support to solar electricity and other renewable technologies.”