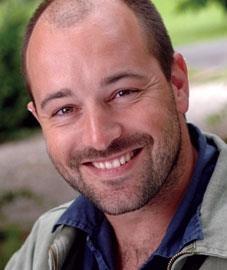 What made you go into communications?

I recognised some real problems with communication. My first masters was in marine biology and I worked as a fisheries researcher, but I ended up very frustrated at being ignored and seeing the industry go into decline. Then I worked as environmental manager at Transport for London, but again there was a real issue with communication. I decided to become a campaigner and a communicator. I met Solitaire Townsend [Futerra co-founder] when I did my second masters, in sustainable development. We set up Futerra in 2001. At the time green communications was awful. We were looked at like freaks and told there was no business to be found in that area, no reason for a specialist outfit. Now it’s a major consumer and business issue.

What problem do you see with how sustainability is communicated?

We are stuck in a pragmatic fudge. Public cynicism is compounded by government inconsistency and weak messages. Before now, we’ve been fighting a attitude battle – this idea that being green is a trend, or an optional extra. Those days are behind us but what we lack is a serious goal. Sweden said it would be oil free by 2020 and that’s a huge aim, but it certainly galvanises creative thinking.

How do you think greenwash is affecting the green agenda?

I hate it when some overenthusiastic PR gets hold of something vaguely green and hypes it out of all proportion, without really understanding the issues or backing it up with credible evidence. It weakens the whole green agenda and we run the risk of compounding cynicism right across the board. It happens in the built environment too. Some client tacks on some wind turbines and the PR agency suddenly claims the building’s sustainable. Utterly pointless, and it discredits the whole small scale renewables industry. To those kinds of PRs, I say sort your act out. Understand the detail, understand the real story behind it.

Have you turned down work because of your green scruples?

It’s a matter of what you work on. We co-created a small business awards programme for Shell, designed to encourage an entrepreneurial response to climate change. They asked us to do some PR for them and we said no. We don’t believe they’re part of a sustainable future. I may be interested in working with their renewables team but never general PR. If there isn’t a story to tell then we will be honest about it, and we have lost clients because of that.

How sustainable is your lifestyle?

I live and breathe sustainability – it’s a personal passion. We strive to lead by example as a business, too, by recycling and monitoring our carbon footprint. I haven’t had a car in 10 years and I gave up flying for holidays six years ago. I’ve taken one flight since then and that was to a climate change event in China for work. I refuse to fly to conferences now. On two occasions I’ve used the money they would have given me to fly out there and made a film to be shown at the event. That sends a powerful message.

Business travel is something that’s going to change in a more carbon constrained world.

What PR advice would you give to engineering consultancies?

Ask yourself whether what you’re doing is genuinely sustainable? Then ask yourself why? Is it at the heart of what you’re doing, is it changing the way that your offering is perceived, and is it changing the market, because a lot of it isn’t. Is it unique? What is the benefit to your potential client? How will make a difference, and how will you demonstrate that it does? This is where a well-observed, independent case study comes into its own.

How do you think the perception of green has changed over the years?

My old joke about working in climate change was that it’s a bit like wetting yourself in a dark suit: nobody really notices but you get a warm feeling inside. Now I just say it’s like teenage sex: everyone says they’re doing it but they probably aren’t, and those that are probably do it badly.

How would you raise awareness of the industry?

Turn the country’s heating off and see what happens.

02 Green products v dirty company
Such as efficient light bulbs made in a polluting factory.

04 Irrelevant claims
Emphasising one tiny green attribute when everything else is ungreen.

05 Best in class?
Declaring you are slightly greener than the rest, even if the rest are pretty terrible.

07 Gobbledygook
Jargon and information that only a scientist could check or understand.

08 Imaginary friends
A “label” that looks like third-party endorsement… except it’s made up.

09 No proof
It could be right, but where’s the evidence?