Rainwater and greywater can achieve 50-70% efficiency 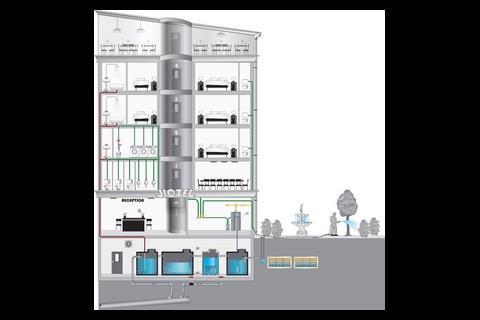 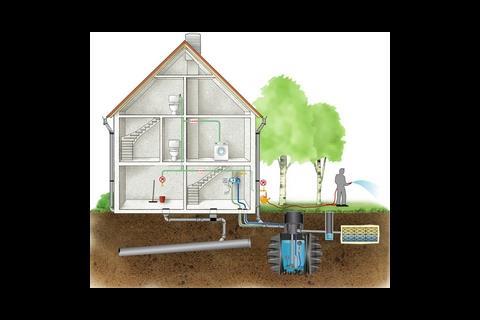 A third of our water use goes on flushing toilets, yet this precious resource needn’t end up down the drain. Give greywater and rainwater reuse a chance, says Davis Langdon Mott Green Wall

Water usage in the UK has increased rapidly over the past century – and it is still accelerating. Average usage per capita is now estimated to be at least 150 litres a day, and the loading on water supply and drainage infrastructures will increase still further with the population predicted to reach 65 million by 2017 and 75 million by 2031. Even at the current level of consumption, it is clear from recent experience that long, dry summers can expose the drier regions of the UK to water shortages and restrictions. The predicted effects of climate change include reduced summer rainfall, more extreme weather patterns, and an increase in the frequency of exceptionally warm, dry summers. The result is likely to be an increase in demand to satisfy irrigation of gardens and parks, greater use of sports facilities and other open spaces, plus the additional needs of agriculture.

Drinking and cooking account for less than 20% of average domestic water use. More than a third of the total is used for toilet flushing. The demand for garden watering, although still relatively small, is increasing year by year and coincides with summer shortages.

In many types of building, rainwater from the roof area can be collected and, after filtration, used for toilet flushing, cleaning, washing machines and outdoor use saving, in many cases, a third of the water demand.

The other, often complementary, recycling approach is to collect and disinfect greywater – the waste from baths, showers and washbasins. Hotels, leisure centres, care homes and apartment blocks generate large volumes of waste water and therefore present greater opportunity for recycling. But with intelligent design, even offices can make worthwhile savings by recycling greywater, not necessarily to flush all of the toilets in the building but perhaps just those in one or two primary cores, with the greywater plant and distribution pipework dimensioned accordingly.

Rainwater harvesting is already common in northern continental Europe. In Germany, 60,000-80,000 systems are being installed every year, compared with perhaps 2000 in the UK. Greywater recycling systems, which are less widespread than rainwater harvesting, have been developed over the past 20 years. Biological and ultra-violet disinfection, rather than chemicals, is leading the way with advanced technology membrane micro-filters used to cut associated energy consumption.

Points can be gained for a BREEAM assessment for efficient systems – those designed to achieve enough water savings to satisfy at least 50% of the relevant demand. Furthermore, rainwater harvesting systems from several manufacturers are included in the government’s energy technology product list and so qualify for enhanced capital allowances. Claims are permitted not only for the equipment but also for directly associated project costs including:

Figure 1 shows an arrangement for rainwater harvesting that can be achieved at modest cost if installed at the same time as building the house. The collection tank is buried in the ground but could also be installed in a basement. Rainwater enters drainage through sealed gulleys and passes through a pre-filter to remove leaves and other debris before passing into the collection tank. A submersible pump, under the control of the monitoring and sensing panel, delivers recycled rainwater on demand. The non-potable distribution pipework to the washing machine, cleaner’s tap, outside tap and toilets is shown (in green) as a boosted system but could also be configured for a header tank in the loft, with mains supply back-up, monitors and sensors located there instead of at the control panel.

Calculating the collection tank size brings into play the concept of system efficiency – relating the water volume saved to the annual demand. With ample rainfall and a large roof collection area, it should be possible in theory to achieve almost 100%. In practice, systems commonly achieve 50-70% efficiency, with enough storage to meet demand for one week.

As well as reducing the demand for drinking- quality mains supply water, rainwater harvesting tanks act as a storm water attenuator, cutting the drainage burden and the risk of flooding, which is a benefit to the wider community.

Many urban buildings experience low rainfall and may not have a large roof collection area. It could still, however, be worth considering water savings through greywater recycling.

In Figure 2, waste water is collected by conventional fittings and pipework to enter the pre-treatment sedimentation tank, which removes large dirt particles. It moves to an aerobic treatment tank where bacteria break down biodegradable substances. In the third tank an ultra-filtration membrane removes all particles larger than 0.00005mm, including viruses and bacteria. Clean water is stored in the fourth tank, from where it is pumped on demand according to monitors in the control panel. It can be used for toilet and urinal flushing, laundry and general cleaning, and outdoor tasks such as vehicle washing and garden irrigation a big water-saving for premises such as hotels. If the tank becomes depleted, distribution is switched automatically to the mains back-up.

If there is insufficient plant room space, the tanks can be buried but maintenance access must be provided. The overflow soakaways indicated in the illustrations are recommended but are not an inherent part of the rainwater harvesting and greywater recycling systems.

Why not go for both systems in one? Rainwater can be integrated into a greywater scheme with little complication other than a bigger tank. Where adequate rainwater can be collected readily and diverted to pre-treatment, heavy demands such as garden irrigation can be met more easily than with greywater alone. The combination also helps to reduce greatly the risk of flooding in the area.

These scenarios are not intended to compare potential payback periods of rainwater harvesting against greywater recycling but to illustrate the importance of choosing “horses for courses”. The office building, with its relatively small roof area and limited demand for toilet flushing, results in a fairly inefficient system. Burying the collection tank also adds cost, so payback exceeds 20 years.

Payback periods of less than 10 years are feasible for buildings with large roofs and a large demand for toilet flushing or other uses, such as sports stadiums, exhibition halls, supermarkets and schools.

The hotel scenario is a good application for greywater recycling. Many hotels and residential developments will generate more than enough greywater to meet the demand for toilet flushing, etc, and in these circumstances large quantities of water can be saved and recycled with attractive payback periods.

Thanks to Aquality Trading & Consulting for assistance in preparing this article (www.aqua-lity.co.uk)

Table 1 shows an installation cost of £33,000 for an office building in Leeds, with a roof area of 2000m2 and accommodating 435 people over three floors. Annual rainfall is 875mm and the application is for toilet/urinal flushing. An underground collection tank of 25,000 litres has been specified to give 4.5 storage days.

Table 2 shows an installation cost of £52,500 for a system in an urban hotel with 200 rooms. It offers little opportunity for rainwater harvesting but has a greywater demand of up to 12,000 litres a day for toilet and urinal flushing, and a laundry. The greywater recycling plant is in a basement plant room.