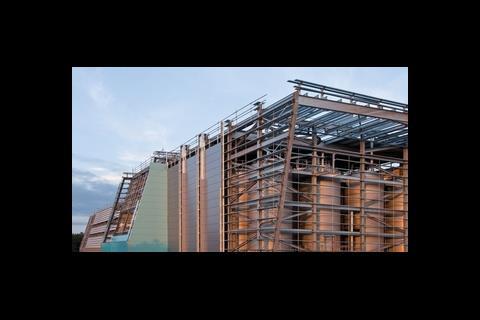 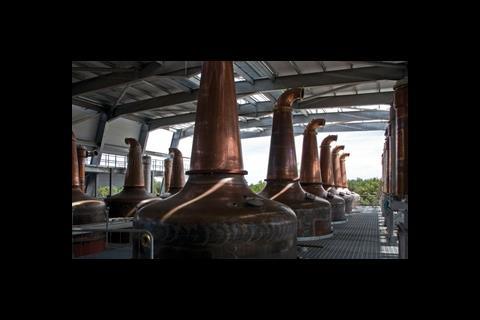 A specialist coppersmith company, Abercrombie, built the 14 new stills. The “shoulders” have to be hammered into shape by hand 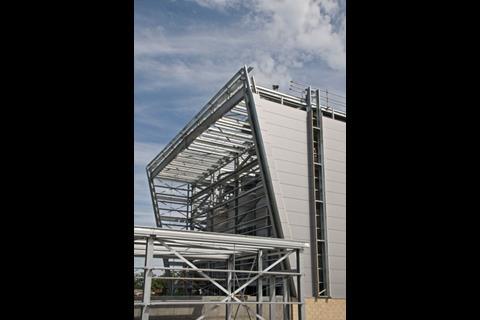 Completed frame of the new distillery 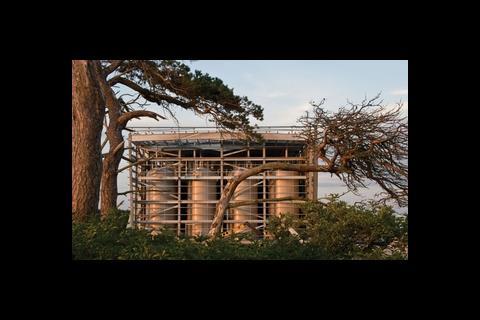 The distillery viewed from the main road, with four of the 14 fermenter tanks in view 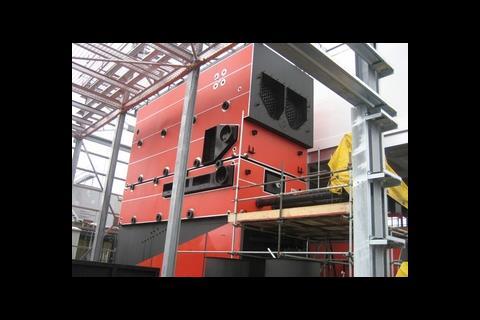 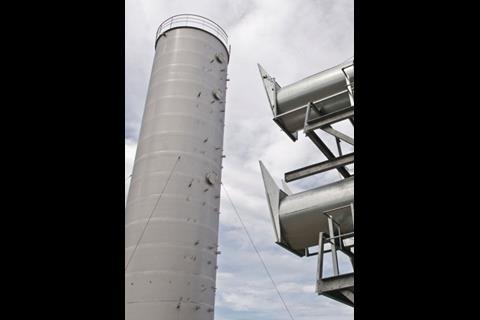 Scotland’s first new whisky distillery in three decades slashes the carbon footprint of its predecessors, largely by harnessing biomass produced by the process.

Moray bills itself as the home of Scotland’s greatest export. The road signs proclaim that you are now entering “Malt Whisky Country”, and the Speyside area alone has more than half of the distilleries in Scotland, including best-sellers such as Glenfiddich, Glen Grant and Aberlour.

The global market for whisky goes from strength to strength. “Over the past five or six years we’ve seen staggering growth from newer markets – South America, China and India,” says Mike Jappy, project manager for brewing giant Diageo, whose brands include Johnnie Walker, Bell’s and J&B. The company wanted to increase capacity by 10 million litres a year, and to do so it had to build the first new distillery in Scotland for three decades.

The process of transforming barley and water into whisky has altered little over centuries, but Diageo was determined that the £40m plant at Roseisle, in the heart of whisky country, should break new ground. It decided to build the greenest distillery in Scotland, powered with biomass produced by the brewing process itself.

“Diageo has a global ambition, like every other business, to reduce its carbon footprint,” Jappy explains. “We hadn’t figured out what we were going to do at the start of the project. The ideas developed as the project rolled on and we came to the solution not long before it was announced. We felt we had to deliver something different, and what we landed on was using biomass.

By law, whisky may only be described as Scotch if it has been wholly distilled and matured in Scotland for a minimum of three years. American and Irish liquor is spelt whiskey.

“This is new technology. It has been done before but not in this application, so we couldn’t go to the market and acquire it off the shelf. We’ve had to develop the technology.”

The firm sought help from Faber Maunsell in 2006. Richard Mann, project director, says: “Our role as lead consultant is unique. Normally the architect is the lead consultant, but because this project is driven by the process and by engineering, it made sense that the engineers should be in the driving seat.”

A rival distiller interested in biomass approached Faber Maunsell about five years ago, but no one “had the balls” to use the process until now, Mann says. All eyes will be on Roseisle to see if Diageo’s courage is rewarded.

Whisky is made by mixing malted and ground barley with hot water in a mash tun (see panel on how whisky is made, overleaf). The liquor from this mashing process, known as wort, is distilled into spirit in copper stills, and emerges as whisky after a legal minimum of three years maturing in wooden casks. The leftover grains from the mashing process, known as draff, have traditionally been used as a cattle feed.

The term whisky derives from the Gaelic uisge beatha, meaning water of life

This appears to be a laudable example of sustainability, but Jappy points out a problem: “The flaw is that you don’t have enough cows nearby to feed the draff to. In the summer, the farmers don’t want to pay for the draff while they have grass, so it goes into dried pellets which can be sold at any time of year in any location. It’s a highly energy intensive process and while it is a good way of using the draff, in terms of energy consumption and the revenue you get back it’s not quite so clever. That’s why we arrived at the idea of using the draff as biomass fuel.”

Roseisle is the largest malt distillery built by Diageo, and the size presented a challenge. Jappy explains: “The thing about the biomass boiler is that you can have one that’s large enough to power an industrial power station or one to the scale of a community centre; it’s the bit in the middle that’s thin on the ground. We wanted to develop that technology and our reasoning was that if you can make it work on this scale, we might be able to scale it down for smaller distilleries.”

Another area of concern was water consumption. The two ingredients in whisky making, apart from barley, are energy and water, which produce the steam necessary for distillation. “If you can offset energy demand by using your own biomass, the next thing is to try to reduce the amount of water you consume,” Jappy says.

The water reclamation plant on site will put the liquid byproduct from the distillery through a treatment process that will produce “as near as damn potable water”. Faber Maunsell claims that the amount of water saved will be roughly equivalent to the annual demand of the distillery, about 300,000m3 per year.

Dalkia, with its sister company Veolia, is the design, build, finance and operate contractor for the water treatment and biomass plants.

Diageo saw an opportunity to save yet more energy by recovering some of the waste heat from the distilling process. “To get all the benefit you can, you need to mate your distillery to something else,” Jappy says. The distillery was sited beside a maltings plant built in the 1980s, which allows Diageo to use waste heat from the distilling process in the maltings plant.

“It is the perfect solution,” says Mann. “You have a load, and you have a space to put a plant that can use a byproduct to create energy to put right back into the load. It's just a matter of looking at where you are; how you can use the energy and feed it back in.”

Also, putting the new distillery next to the malting plant reduces carbon emissions from the transport of raw materials.

Malt whisky distilling dates back at least to the monks of the 15th century and probably long before.

Other projects have tried to make use of waste heat. A distillery outside Aberdeen built greenhouses nearby and used its waste heat to help grow tomatoes there. Another scheme on the Isle of Jura used the hot water for fish-rearing ponds. Diageo also used this approach at a distillery in Inverness, again with a malting plant close by, taking waste heat from one facility to supply energy to the other.

Another example of sustainability at Roseisle is the use of anaerobic digestion to convert the carbohydrates in the distillery byproducts into methane and “clean” water. The water goes back into the malting process while the methane is fed into the biomass boiler.

Jappy says: “If we can perfect the technology here then we will look at doing it in other places, certainly. Combining the energy the biomass can offer and the recovery of waste hot water, we will offset our fossil fuel demand by about 85%.” Breaking the figures down, 50% of the power for the distillery – about 120,000kWh a day – will come from the biomass plant and 35% from the heat recovery system. Together the measures will recover 10.3MW of the 12.3MW of heat required for the distillery process.

The energy shortfall will be covered by conventional boilers, but Diageo is aiming higher: “We have some other ideas, such as process optimisation, but we believe we can nudge this distillery to almost fossil fuel neutral in the near future.”

Malt whisky has a more pronounced bouquet and flavour than grain whisky, commonly made from wheat and maize. Production of grain whisky is not so influenced by geographical factors and it may be distilled anywhere in Scotland.

Specialist coppersmith Abercrombie is on site, producing the 14 stills required. Each distillery has a unique shape of still that influences the flavour of the whisky.

“Other distillers will be watching this plant closely,” Mann says. “Energy costs are crippling, so this approach was not only commercially sound but had the all-important carbon reduction aspect to it. Any top 100 company wants to bring down its carbon footprint, and there is no question that the carbon footprint of this facility will be dramatically smaller. I’m confident it will act as a benchmark and will influence the way Diageo, and its competitors, look at the distilling process.”

The project is aiming for a BREEAM industrial rating of “excellent”. The site will be fully operational in April and the first fruits of Diageo’s environmentally friendly labours should be available for drinking in 2012.

There are two kinds of Scotch whisky – malt and grain. The malts are divided into four groups according to the location of their distilleries:

How whisky is made

Malting
Barley is the main raw material in all single malt Scotch whiskies. First, the barley must be put through the process of malting, during which the grain germinates and is kiln-dried.

Traditionally, distilleries used peat to fuel this drying process, giving the malt a distinct smoky flavour which carried through into the finished whisky. This is still done at certain maltings. After drying, the malt is left to cool naturally. Next the malt is ground to split open the grain without crushing it entirely, which allows the starch inside to be released during mashing.

Mashing
The malt is mixed with hot water in a circular, flat-bottomed vessel known as the mash tun. Mashing releases the starch, which breaks down into sugar to create a sweet liquid, called the wort. A false bottom in the mash tun allows the wort to drain off once mashing is complete.

Distillation
A large volume of the wash is heated in the copper still to boil off a small amount of spirit. This spirit is condensed before undergoing a second distillation, which gives it strength and flavour. Eventually a fine, high-quality spirit remains. It retains the character of its raw ingredients and the unique fingerprint of the distillery, but it is still years from becoming a whisky.

Maturation
The spirit has to mature in an oak cask in Scotland for at least three years to qualify as whisky. Most distilleries leave their whiskies to mature for much longer, often 10 to 20 years, giving flavour and colour to the whisky. It loses volume and alcohol by evaporation during this process, a loss known as the angel’s share.

Most single malt whisky casks have been used previously for sherry or bourbon. It has become popular to finish some specialty whiskies by moving them to a different type of cask for several years once they reach maturity.