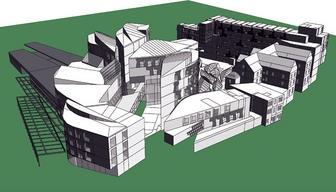 The Scottish Parliament building in Edinburgh has received an energy performance certificate (EPC) rating of B, despite being designed more than 10 years ago

David McEwan, director of IES Consulting and energy assessor for the project, said: “Given that the building was designed to pre-2000 standards, when awareness and understanding of energy efficiency was considerably lower, this demonstrates exactly how cutting edge it was.

“Energy efficiency standards have been raised by about 30% since then.”

The Edinburgh project was designed by the Catalan architect Enric Miralles, with RMJM acting as UK architect and services engineer and Arup as structural engineer. Miralles died in 2000, a few months after construction began.

The building was controversial, coming in 10 times over its predicted budget and opening three years late in 2004. It has had structural problems: a wooden beam came loose in the main debating chamber in 2006.

Glasgow-based IES used 3D modelling to determine the rating for the building, which was the most complex it had assessed. It has a combination of natural and displacement ventilation, and uses some of the boreholes from the Scottish & Newcastle brewery formerly on the site.

David Fairhurst, the Parliament’s environment manager, said: “This rating clearly demonstrates the conscious efforts that were put into the design and construction of Holyrood to ensure it operated as an energy efficient building.”