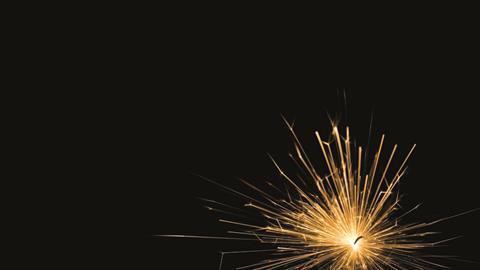 The decision of seven major M&E contractors to break away from the 40-year-old JIB wage agreement was prompted by an ‘urgent need to modernise’ but has already led to angry clashes between workers and police. Building reports on a row that threatens to become the sector’s biggest industrial relations dispute in 15 years

On the morning of Wednesday 23 November last year, the London headquarters of specialist contractor Gratte Brothers came suddenly under attack. The Islington-based offices were stormed by around 40 protesting electricians who barricaded themselves into the lobby.

This was no quiet protest. Protesters rushed the building shouting abuse at staff and it is understood that a female employee was knocked to the floor in the chaos. Police later arrived on the scene - with bolt cutters to open the doors, which had been chained up, trapping the firm’s frightened employees inside.

This incident was the culmination of a series of bitter, rumbling protests that gripped some of the industry’s largest M&E contractors at the end of last year. There have been strike ballots, a 1,000-strong London rally and violent clashes with police, as well as the sit-in.

The dispute centres around the decision by seven contractors -including Gratte Brothers and Balfour Beatty Engineering Services (BBES) - to ditch the 40-year-old Joint Industry Board (JIB) run by the Electrical Contractors Association (ECA) and Unite, in favour of a new agreement drawn up by the Heating and Ventilating Contractors Association (HVCA). The move could have wide-ranging implications for thousands of workers, as well as changing the shape of the heavyweight M&E sector, which represents around 4,000 firms turning over £9bn a year.

Here, Building untangles the web of rows and infighting at the heart of the dispute, and finds out why some believe this was a “battle waiting to happen” and one that the M&E sector needs to have to modernise.

At the heart of the heavyweight firms’ plans is the breakdown of a decades-old distinction between mechanical and electrical workers and contractors. The new proposals - called the Building Engineering Services National Agreement (BESNA) - set out one set of pay and conditions for both mechanical and electrical workers to replace the myriad separate competing agreements that currently apply.

John Moore, chief executive of BBES, says: “There’s an urgent need to modernise. Instead of having siloed trades we need to have multi-skilled technicians. [This sector] has been lagging behind in productivity and multi-skilling for 10 years.”

The M&E sector is pretty much the last remaining unionised sector. Its site based people are still living in the sixties. It’s a fight that was waiting to happen

As Building revealed last month, the contractors also plan to employ proportionally fewer skilled workers on sites under BESNA. The firms want to employ fewer NVQ3 level electricians and more workers at a new “installer” grade, which will be paid at £11.89 an hour rather than £14.83. Unite has condemned the contractors, saying their plans would “deskill” the sector. But the firms argue a “rebalancing” of their workforces is necessary for commercial reasons and because of a rise in prefab construction methods.

The seven firms behind BESNA - which also include T Clarke, Crown House, NG Bailey, Shepherd Engineering Services and SPIE Matthew Hall - also have far-reaching plans to overhaul the whole M&E sector. These include calls for a single trade federation, rather than the mix currently on offer. BBES has quit its membership of the ECA accordingly, and others are threatening to do the same. In March the HVCA will rebrand to become the Building and Engineering Services Association - a clear tilt at becoming the umbrella body for the sector.

This could be the “last battle” in industrial relations and one that arguably needs to be had. Vaughan Burnand, a director at consultant CWC, says: “[The M&E sector] is pretty much the last remaining unionised sector […] Its site based people are still living in the sixties. It’s a fight that was waiting to happen. I am sure the M&E contractors will dig their heels in over this but the time for type-setting is over for God’s sake and this last battle is one that probably needs to happen for this part of the industry to be able to move on and modernise.”

But there will be consequences. Some believe that the potential for mass redundancies and nation-wide strike action as a result of the dispute could do more to damage the sector than to modernise it.

Around 6,000 workers have been told to sign up to BESNA or face redundancy by the week ending 6 April. More than 70% of these workers had done so as of 23 January. But protesters claim a hardcore of BESNA opponents will not sign up by the deadline, raising the prospect of mass redundancies.

Unite has pledged to ballot all seven firms involved in BESNA for strike action before the 6 April deadline. The result of the first ballot - at BBES - was due to be announced on 2 February after this article went to print. An earlier ballot of BBES last November, which was successfully overturned by the contractor, after it pointed out alleged deficiencies with the vote, was won by Unite, with 81% of union members backing strike action.

The threat of strike action by thousands of workers, coupled with the prolonged five-month period of protests, makes this arguably the biggest industrial relations dispute since the nationwide electricians’ strikes of 1998 and 1999 - a fact that is making the rest of the industry, which has enjoyed a relatively strike-free few
years despite the recession, extremely jumpy.

“It’s absolute madness to be in this position when the economy is looking very bleak,” says Tony Williams, an analyst at Building Value who also sits on the boards of various contractors. “It’s the wrong time to be drawing a line in the sand on pay and conditions. The priority should be keeping these employees gainfully employed.”

So, with a perfect circle forming of everybody arguing with everybody else, perhaps it’s time to clarify the disputes, and where they are likely to go from here … 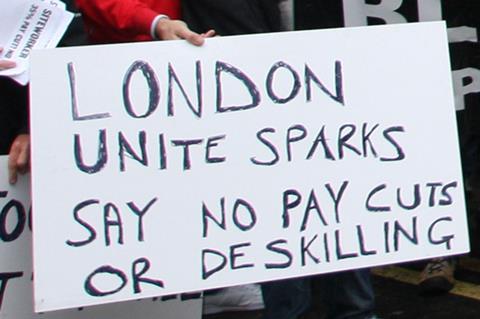 Unite argues that the contractors’ talk of M&E reform is a smokescreen for their real intention - to cut wages. The contractors vehemently deny this and say that workers’ wage levels are guaranteed under BESNA. But the union is alarmed by the firms’ determination to push through pay and conditions proposals without their agreement.

The union is also angry about the contractors’ plans to employ proportionally fewer skilled workers, even though the firms stress the plans will not result in downgrades for currently employed workers.

The contractors argue they have been labouring under the burden of outdated pay and conditions agreements for decades and the situation is having a dire effect on their ability to win work. Blane Judd, chief executive of the HVCA, says UK contractors are losing out to international competitors as a result. Judd says: “It’s about trying to win work and guarantee jobs. If we continue as we are, we could have 1,000 unemployed approved electricians - what good does that do anybody?” He further argues that the four overlapping JIB agreements that BESNA will replace are outdated, expensive and inefficient.

John Moore of BBES suggests the union is partly kicking up a storm because it fears it is losing its influence - Unite, together with the ECA, currently runs the JIB agreement for electricians. “The existing agreements give them a significant degree of influence and they are not interested in modernising the industry,” Moore claims.

But Bernard McAulay, Unite’s national officer for construction, says the contractors should return to the JIB agreement and reform it, adding that he is confident that Unite members will back strike action at the seven contractors.

“They are going to send a message that they’re not prepared to accept employers slashing their wages in future,” he says. “BESNA is an employers’ charter.” He admits, though, that “workers are begrudgingly signing up to keep their jobs”.

Judd says: “If there are vacancies as a result of people not signing up, there will be vacancies to recruit for. But this is not about getting rid of jobs - any staff lost will be replaced.”

He says the door to the union to negotiate is still open, as is the route to negotiate in Acas-mediated talks, following similar discussions in December.

Moore claims that only around 380 of the 1,250 workers at BBES being asked to sign up to BESNA are actually Unite members.

The two trade federations - which rather awkwardly share the same office building in west London - have fallen out because the HVCA was persuaded by the heavyweight contractors’ calls for a more homogenous M&E sector, while the ECA was not. The HVCA helped the contractors draw up the BESNA agreement, and in March will become the Building and Engineering Services Association.

The breakdown in relations is all the more surprising as up until 2010 the organisations had been engaged in long-term talks to merge, partly to fulfil the desires of their largest members. But when these broke down, the incensed contractors turned their back on the JIB and some turned their back on the ECA as well (see below). Both organisations blame the other for the breakdown in talks.

Judd says the HVCA is primarily rebranding to better represent the range of services its existing members offer. “This is a clearer representation of what we represent. Many of our members do more than H&V,” he says. But he admits the BESNA initiative and the breakdown of merger talks with the ECA were “factors” behind the rebrand.

In December a coalition of trade bodies, including the ECA, the Scottish & Northern Ireland Plumbing Employers’ Federation, the Association of Plumbing and Heating Contractors and Scottish body Select, criticised the HVCA’s actions, saying it was “damaging” the industry.

Steve Bratt, ECA chief executive, said in a statement: “We recognise that it is important to HVCA to retain the contractors that are seeking to drive this through; however, doing it in this way will do harm to the industry as a whole.

“We are determined to make changes in the industrial relations environment and have been in positive dialogue with the union about this. We would urge the HVCA to adopt a more collaborative approach.”

Judd says “dialogue” has begun between the two bodies on what the HVCA’s rebrand means and on working more collaboratively.

ECA vs some of its members

The dispute has seen some of the industry’s largest specialists fall out with the ECA, one of the biggest and best funded trade federations in the industry.

Building revealed last month that BBES was the first contractor to sever ties with the 111-year-old body. Crown House and SPIE Matthew Hall intend to follow suit. Moore called for “one association and one agreement”, challenging the justification for the continuation of the ECA.

One of the other contractor bosses, who preferred to remain anonymous, said the BESNA firms felt the ECA had “stabbed us in back”, due to its bungled attempts at reforming the JIB.

ECA chief executive Bratt said in a statement: “It’s disappointing that these seven contractors continue to drive forward this ‘agreement’ at the expense of the industry at large and we would urge them to seek a collaborative and more sustainable solution.

“It is a shame that some of this small group of members may leave ECA on the back of this one issue, which, I am certain, can be resolved through the collaborative infrastructure which has always served our industry well.”