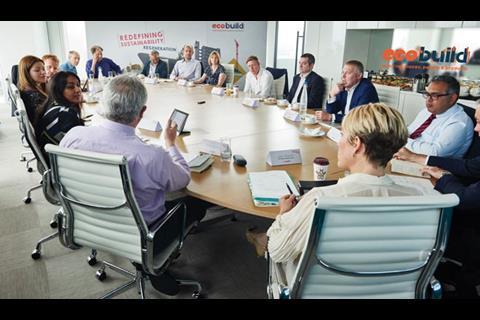 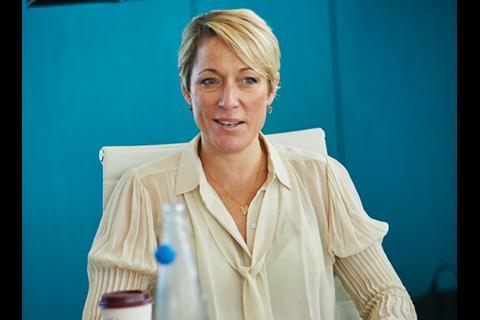 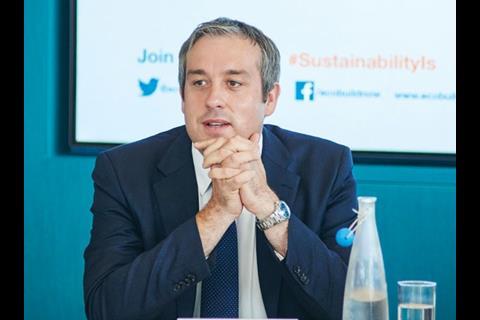 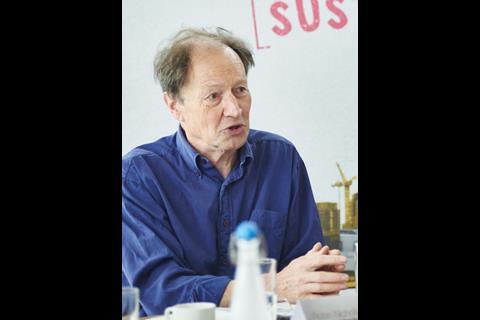 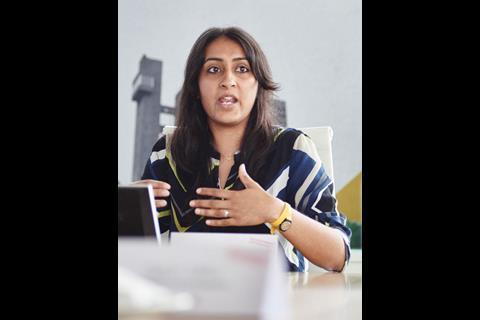 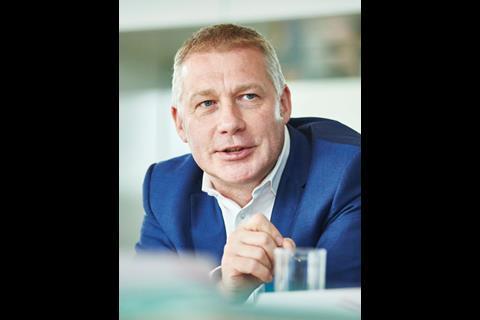 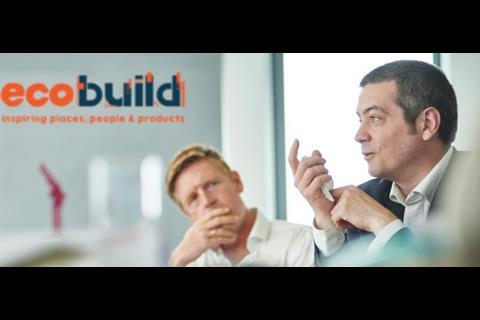 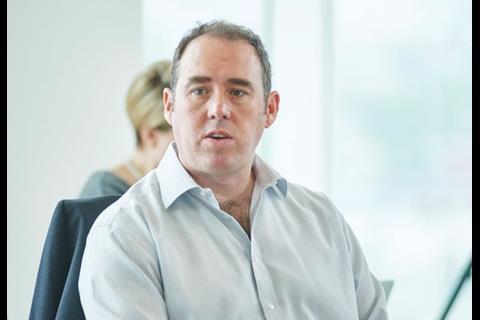 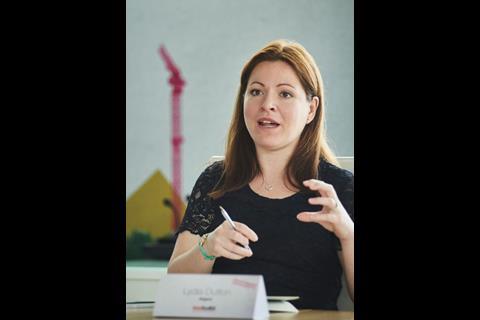 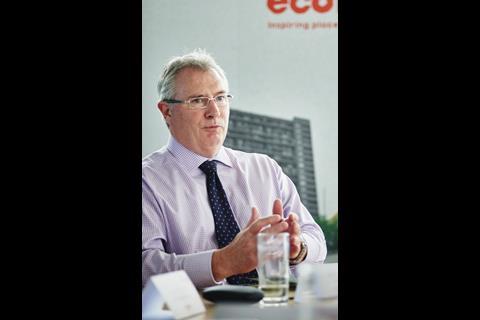 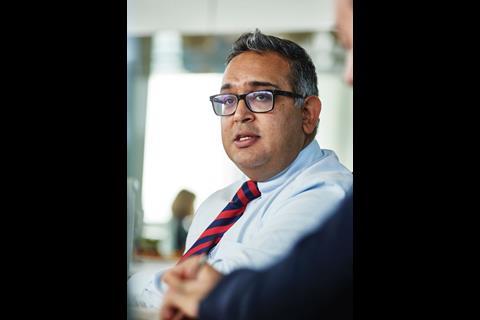 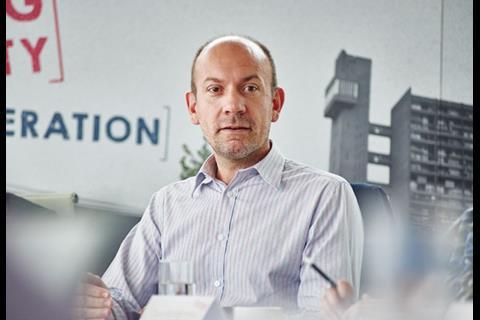 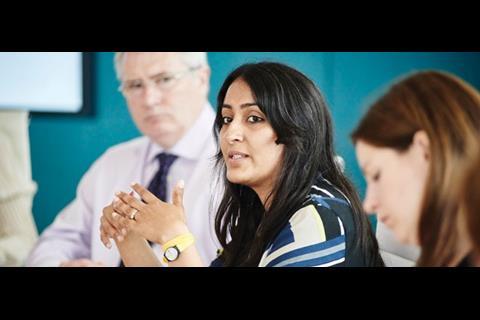 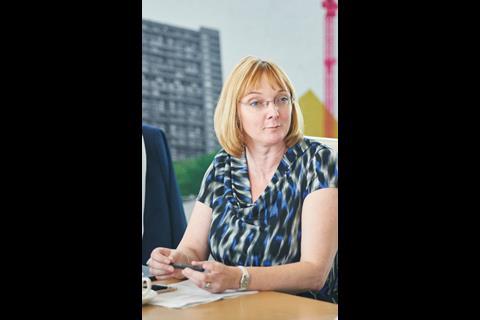 To launch the programme for next year’s show and its central question of redefining sustainability for the construction industry, Ecobuild gathered a panel of experts to debate the question of what sustainability means to them, and to our industry

The last year has been a distinctly mixed one for those championing a more sustainable built environment.

In the UK, the Conservative government has been dismantling the zero-carbon homes regime and cutting support for renewable energy schemes. But the world picture has provided more cheer with 195 world governments agreeing to the first, legally binding global climate change deal.

With the sustainability agenda at this crossroads, Ecobuild pulled together a dozen of the construction industry’s leading sustainability experts before last month’s EU referendum to discuss the way forward on the issue. The roundtable is the first of four which will be held in the run-up to next year’s event.

The debate kicked off with the question of whether the industry needs to redefine its approach towards sustainability.

“For the UK Green Building Council, sustainability has always been about more than just protecting the environment”

For the UK Green Building Council, sustainability has always been about more than just protecting the environment, the organisation’s chief executive Julie Hirigoyen said.

Hirigoyen, who chaired the roundtable, pointed out that the academic definition of sustainability has always embraced economic and social factors too.

Simon Hancock, technical director at Atkins, agreed that a wider angled definition was important. “The industry has focused to a large degree on carbon and materials and waste, which is all very valid. Climate change is still a big issue, but the industry doesn’t focus so much on the social and economic side.”

However, he said that this focus was shifting with the emergence of wellbeing as an increasingly important factor for practitioners in the built environment.

The chief topic of discussion centred on how to reframe the sustainability debate so that it makes more sense to potential end users.

Matt Smith, sustainability manager at Lendlease, said: “It’s got to be about relating to customers so that they see the connection to their day to day lives.” This is already starting to happen, he said, pointing to growing awareness of issues like air pollution which are inevitably influenced by the way communities develop.

The increasing adoption of smart technology devices in the home will also result in consumers becoming more engaged in the way their homes run, Smith predicted.

“It’s not just facility managers who will be interested in buildings, people buying and living in that home will be more interested in understanding more about the benefits of having a more sustainable home.”

“Sustainability is already a critical issue for the industry. The EU Referendum result will arguably mean that UK businesses shoulder the responsibility”

Martin Townsend, global director of sustainability of BRE, said that shifting the sustainability debate from a narrow professional audience into the wider public arena could create a different dynamic in the market.

And this could be influenced by wider changes in consumer’s tastes, he said, pointing to shifts in the pattern of automobile ownership. “Young people may not own a car but may rent one for a couple of hours. We must look at the way society is changing.”

That wider conversation about the sustainability of the built environment could extend not just to homeowners but occupiers and their staff too.

“It’s not just built environment professionals. Everybody knows what they like and don’t like in a building,” said Sara Kassam, head of sustainable development at the Chartered Institution of Building Services Engineers.

Even schoolchildren could participate in post-occupancy evaluations of their schools, she added.

However Munish Datta, head of property and facilities management at Marks & Spencer, said that in order to widen out the conversation, the industry needed to find a different and less technical way of talking about sustainability.

This would for example mean discussing the comfort that could be delivered by a thermally efficient home rather than the amount of carbon consumed per kW hour, he said.

“If we want to make changes, we need to talk to the customer in a language they might understand. To bring about systemic change, we are going to have to bring about changes in the way the end customer perceives it.”

Winning over business customers could also mean focusing on issues that matter to them, said BRE’s Townsend, who argued that delivering better energy saving performance could help firms make more productive use of their assets.

“Resource efficiency is great but I wonder whether we need to talk about resource productivity, getting more from the stuff we invest in,” he said, pointing to the increased interest in better management of energy demand.

This more grassroots approach to sustainability extended to a greater focus on local efforts to promote the idea.

“It’s suddenly not a national debate any more, it’s a local debate. If this agenda is going to move, it’s going to happen at the city level because you can create local business cases. Thinking about what is happening across a nation is very difficult.”

“Often you learn more from things that haven’t worked. It would be great if the people who put the building together were honest and told that story”

And the larger local government units, like the Greater London Authority and the emerging combined authorities, could use their muscle in the supply chain to promote sustainable options, said Diana Montgomery, chief executive of the Construction Products Association.

“The world is changing. Bodies like Greater Manchester are getting all of the contractors round the table early on to have a conversation about what we want to achieve so we can start to tackle the challenges,” she said, pointing out how the housing programmes being worked up by such bodies offered potentially decades worth of work for the industry’s supply chain.

“You can start to get some really innovative thinking. The sustainability agenda helps companies and supply chains to take on a different agenda and think more broadly than the cheapest price, it’s the whole performance of the building that people are living and working.

“If you start with a blank screen, then work backwards you have a better chance of involving procurement teams.”

However, yet to be published research carried out by the Institution of Civil Engineers shows that sustainability has largely been ignored in the devolution deals that have been agreed between local councils and the government.

An analysis of those deals signed so far shows that while there are hundreds of references to the economy, finance and funding, the words environment and biodiversity were only mentioned once or twice.

Gavin Miller, policy manager at the ICE, said that these deals reflected a short-term approach to growth.

“If this agenda is going to move, it’s going to happen at the city level because you can create local business cases”

“These new bodies are being charged by government to drive forward economic growth. However we can’t have a true rebalancing of the economy unless we have these other elements.”

Turning to businesses, how can they be persuaded to embrace the sustainability agenda?

Robin Nicholson, a partner at architects Cullinan Studios, said he detected “a shift from desire for compliance to desire for performance,” with clients less driven by regulatory concerns.

Lydia Dutton, project manager (environment) at Argent, said that companies were taking a longer term view about the buildings they occupied.

“It’s about selling on the building at the end and investors are getting really interested in what a building costs going forwards,” she said, adding that the King’s Cross developer was working with its design and construction teams on the lessons learnt during the project.

“As an industry, we have been trying to get that collaborative approach of understanding what has gone wrong and how we can make it better,” she said, adding that it was becoming increasingly common for clients to want to retrofit existing buildings to higher environmental benchmarks.

Raising sustainability standards across the industry will mean much greater openness about how projects have panned out, said CIBSE’s Kassam.

Townsend suggested this could be achieved by creating Facebook pages showing how buildings operate, including feedback from people working in them.

Such an approach could even run to projects that hadn’t worked as well as intended, said Kassam: “it’s great having success stories and being inspired by case studies, but often you learn more from things that haven’t worked. It would be great if the people who put the building together were honest and told that story.”

“What we are lacking is the honesty about what works and doesn’t work.”

She acknowledged that this approach could be challenging for companies that were wary about protecting their commercial reputations, let alone guarding against insurance claims.

But the downside of a more cautious approach is that the industry is reluctant to try out new ideas.

However the industry is capable of changing, said Townshend, pointing to the revolution in attitudes to health and safety that had taken place over the past 20 years.

He added that the industry had already demonstrated it could reform.

“If we look at zero carbon, the industry was pushed and challenged. We saw great innovation because everybody saw that investment in skills and technology was needed because it was going to be forced upon you.’”

So, in the view of this expert panel sustainability has come a long way from ideas of “being green” and has become a new way of thinking that encompasses people, places, products and, inevitably and necessarily, profit.