At 33m high, a Hackney apartment block is set to become the world’s tallest cross-laminated timber building. Andy Pearson goes on site to find out how this versatile material is helping to make the most of the inner city programme 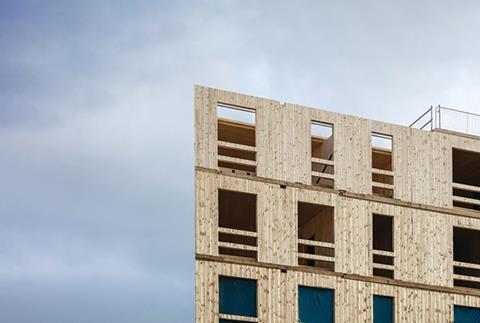 Where is everybody? The construction site for developer Regal Homes’ 121 apartment development on Dalston Lane, Hackney, appears almost deserted. It is only the occasional thud of boots tramping across bare timber floors and the intermittent whine of cordless screwdrivers emanating from the upper floors of the near-complete apartment block that hint as to the whereabouts of a workforce.

On the roof, in the shadow of the tower crane’s giant luffing boom, a team of five men are installing the last of the cross-laminated timber (CLT) panels that form the apartment building’s wooden structure. It has taken them just 12 weeks to assemble the cross-laminated timber-panel structure for this six-storey residential tower and an adjacent four-storey office building on top of a reinforced concrete podium structure. “There are a lot less people needed on a CLT site,” explains Greg Cooper, pre-construction manager of the project’s design and build contractor B&K Structures, by way of an explanation.

The two blocks make up phase 1 of the mixed-use Dalston Lane scheme. The basement works for phase 2 of the project are already under way. This phase will see construction of a 10-storey apartment block which, at 33m high, is set to be the tallest CLT building in the world when it is completed later this year.

CLT construction uses engineered timber panels as the building’s primary structural elements. The panels are manufactured from small sections of renewable softwoods bonded together in layers with adhesive. These layers of lamellas are bonded perpendicularly to one another – giving the product its name; this simple procedure improves the panel’s structural strength, its integrity and its dimensional stability.

The CLT panels for the two completed buildings on the Dalston Lane project were made to measure in a factory in Austria. The panels have been used to form the buildings’ external walls, party walls, the walls surrounding the block’s three access cores and the floors and ceilings of the apartments; even the blocks’ access stairs are made from CLT. Each bespoke CLT panel was delivered to the east London site complete with cut-outs for doors and windows and even pre-formed holes for soil pipes and other penetrations.

The prefabricated panels were delivered on a just-in-time basis and craned into position. Once in place the panels were simply attached to the adjoining structure using off-the-shelf angle brackets, nail plates and self-tapping screws and bolts. “There is no need for heavy tools,” says Cooper, which is one reason the site is so unusually quiet. 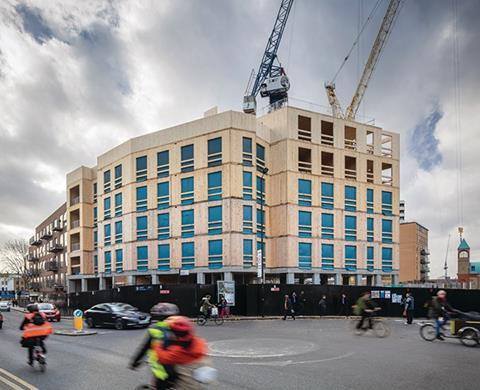 The development consists of a six-storey residential block, a four-storey office and a 10-storey residential tower, which will be the tallest CLT building in the world when it completes later this year. The scheme sits on a concrete podium, needed for the larger spans of retail premises

The 4,400m3 of CLT panels for the Dalston Lane scheme vary in size; typically they are 2.2m wide and up to 13.5m in length. The panels vary in thickness too: wall panels, for example, are 160mm thick on level one, where downward forces are greatest, but they get progressively thinner higher up the building as the forces they carry diminish; by level seven the panels are just 100mm thick. Two thicknesses of floor panels have been used on the project: in the apartments the panels are 140mm thick whereas in the office building, where imposed loads are greater, floor panels are 220mm thick.

A major benefit to the contractor of the CLT solution is that the assembled wooden panels provide a dry, weatherproof environment, free of props and shuttering, to enable follow-on trades to start work at the earliest opportunity. Installation of cabling and plumbing could not be easier, says B&K’s Cooper: “All the follow-on trades have to do is screw directly into the timber panels, unlike for concrete where pre-drilling of holes for fixings is noisy and creates dust”.

As a result Cooper says there are “big programme savings with follow-on trades, such as those fixing doors and dry-lining, because they are screwing straight into timber”.

The first of the follow-on trades are just starting work on the lower floors; the project team estimate that using CLT on this project will save between 10% and 15% on the cost of the overall programme.

The contractor has also taken advantage of the fact CLT panels are made from wood, which means that they can easily be modified on site. As a consequence, the CLT panels incorporate full-height window openings complete with temporary barrier-rails across the openings to help improve site safety.

The barriers are formed by the manufacturer cutting a series of three holes, one above the other, to form the window, rather than a single opening. The holes are separated by two handrail-wide strips of timber which remain in the opening forming the barriers. When the time comes to fit the glazing, the temporary barriers will simply be cut from the window opening using a handsaw so that the glazing can be installed.

From the road the barriers are clearly visible as are all the different elements of the CLT structure: walls, floors and ceilings. The blocks’ appearance will change, however, once the timber walls have been wrapped in a blanket of insulation and covered with a brick outer skin to ensure the development blends in with its neighbours.

The CLT panels will be concealed internally too. A layer of plasterboard will give the apartments’ wooden walls and ceilings a more conventional appearance. In critical areas additional layers of plasterboard will be added to improve the fire and acoustic performance of the CLT. The walls of the block’s three fire-fighting cores, for example, are constructed from 160mm-thick CLT panels, which will soon be clad on both sides in a double layer of plasterboard to improve their fire performance and ensure compliance with the requirement for 120 minutes fire rating. “The plasterboard gives 49 minutes of fire protection, after that the timber chars at 0.7mm per minute so we have to ensure we have enough timber remaining to carry the loads after 120mins,” explains Gavin White, a director of consultant Ramboll, the project’s structural engineer. 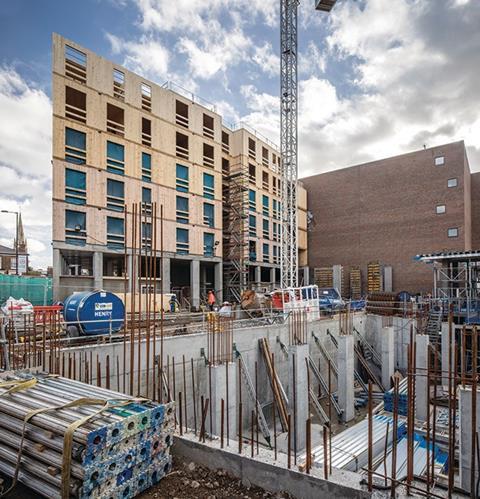 Prefabricated panels, fast construction and the ease of fixing services to CLT compared to concrete shave 10% to 15% off the cost of the overall programme. Prefabrication also means the site is eerily quiet with just five men needed to assemble the first two blocks in 12 weeks 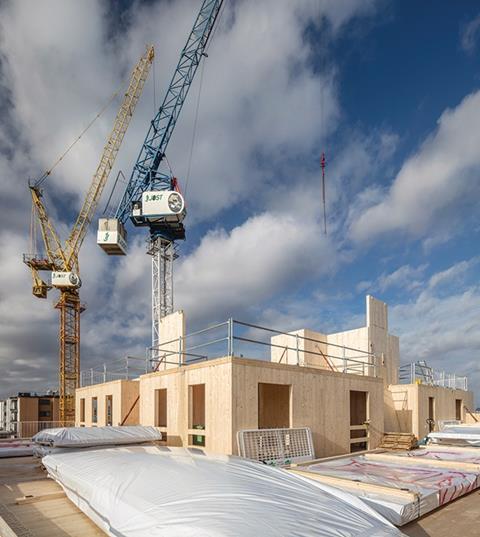 Developer Regal Homes is one of the pioneers of using CLT construction in the UK, having already incorporated CLT into the construction of the Cube Building, another of its developments in Hackney.

“CLT is significantly more sustainable than traditional construction materials, not least because timber – its primary component – is the leading renewable mainstream material in the building industry today,” says Damien Cartmell, production director at developer Regal Homes. “Hackney council is committed to fostering a more sustainable approach to residential construction, so Dalston Lane’s eco-credentials were a perfect match,” he adds.

According to Ramboll’s White, the decision to use CLT for the Dalston Lane scheme enabled the designers to maximise value for the client from the brownfield plot. This is primarily because the site is situated above High Speed 1 tunnels, which link London’s St Pancras Station to the Channel Tunnel. The site also includes a construction exclusion zone for future rail tunnel installation for Crossrail 2.

Both sets of tunnels placed significant limits on the weight of the development allowed on the site by limiting the forces it can impose on the ground. “Because a CLT building is typically 30% lighter than the equivalent steel or concrete-framed building we worked out that for the same loading we were able to generate an extra 15 flats,” explains White.

Having decided on CLT as a construction solution, the challenge faced by the structural engineer and architect, Waugh Thistleton, was to develop an efficient structural solution. Because a CLT building is assembled from solid planes of timber, the planes have to be assembled into a honeycomb of cells, with the panels forming the walls, floors and ceilings of individual rooms. “This tends to make the system better suited to developments with small rooms, such as those found in residential schemes,” says White.

Floor spans are limited to between 4m and 5m to keep the floors as thin as possible. Structural efficiency is maximised by stacking the loadbearing wall panels on top of each other. “We spent a lot of time at the start of the project working with the architect arranging the rooms to getting the spans right, it has to be a very collaborative approach,” White explains.

In addition to dealing with vertical loads, Ramboll has also had to develop a heavy duty connector to ensure the 10-storey CLT structure can cope with the increased horizontal loads imposed on the buildings by the wind as a result of its height [see box]. It has also proved useful for limiting movement in the six-storey block and the connectors have been installed on various walls identified by Ramboll as critical in helping limit the building’s horizontal deflection. “We chose a series of walls to limit connection stiffness, bending stiffness, shear stiffness and podium stiffness,” explains White. 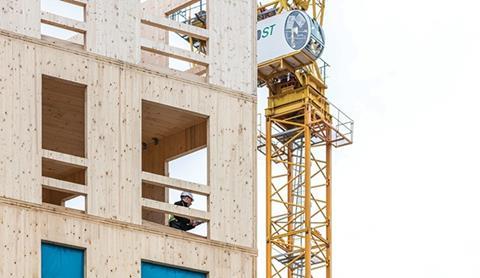 Even with the additional structural connectors construction of the six-storey block was impressively quick. “The advantage of using CLT is that it enables a very fast construction programme,” says White. “It took just 12 weeks to build the six-storey block; to do the same thing with a concrete frame, including building the internal walls and attaching the lightweight steel framing system to support the cladding, would take twice as long – up to 24 weeks to get to an equivalent stage,” he says.

Nevertheless, the Dalston Lane scheme does include some concrete elements including a raft foundation, ground-floor columns and a first-floor deck which supports both the six-storey CLT apartment block and the four-storey CLT office building. Unlike the cellular CLT structure, constructing the podium from reinforced concrete allowed the engineers to create the large-span, open plan spaces on the ground floor which will be suitable to accommodate retail tenants.

The concrete team are now busy on phase 2 of the development, where construction of the basement for the 10-storey block is under way. Here an army of mud-coated operatives are noisily assembling and striking shuttering, laying rebar and pouring concrete, all of which is in stark contrast to the adjacent, almost sterile and eerily silent CLT site.

Click here or the image above for a larger version >>

As commercial pressures push CLT construction to ever greater heights, a way had to be found to counter increased lateral loading from the wind. Ramboll has developed a connection detail to increase connection stiffness between the project’s vertical wall panels, which will help limit the amount the building will deflect in the wind. The connection will also help prevent the floor panels being crushed by the weight of the structure above. The connector comprises four angle brackets. These are positioned above and below the floor panels on either side of the wall. The brackets above are linked to the brackets below by bolts. When the wind blows it causes one side of the connection to rise and the other to compress. The forces on the side that rise are transferred from the bracket through the bolt to the bracket below and then down through the wall. This arrangement avoids the structure pulling up on the floor panel. Between the floor panels a non-shrink, non-compressible grout plug is fitted to prevent the floor being crushed on the side of the connection under compression. The panels were subject to crushing tests at the University of Cambridge to confirm the connection’s performance.