Intergenerational housing: Side by side

One answer to the question of how to house the rapidly ageing UK population is to use an intergenerational model, that mixes housing for all ages, from young to old. 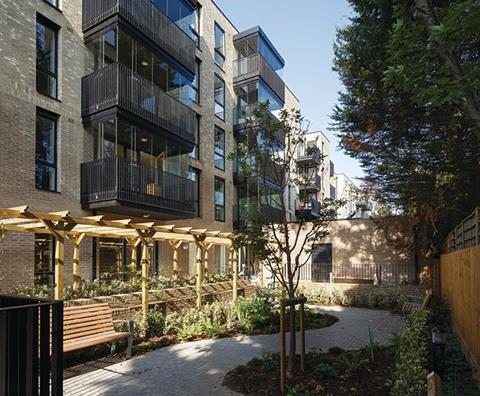 The problem of how to house Britain’s expanding population of older people presents one of the most acute social and economic challenges of the day. The demographics, stimulated by falling birth rates and improved life expectancy, are startling. While the population of those aged 15 to 64 in the UK is expected to increase by an average of 29,000 per year, the population of those over the age of 65 is estimated to balloon by almost 10 times that number to an increase of 278,000 every year.

Clearly this is already placing enormous pressure on care homes. The Institute for Sustainable Construction recently estimated that in order to avert a crisis, the UK would need to build more than 15,500 new residential care developments by 2035, almost 800 a year. Considering that the country has only around 18,000 such units, the scale of the construction challenge becomes apparent.

With the exorbitant cost of both using and providing care homes, the economic challenge is also considerable, with the British Property Federation (BPF) recently calling on local authorities to prioritise care homes in their local development plans in order to increase supply. Also, although the BPF welcomed the government’s commitment to provide at least 8,000 “specialist homes for older people” and people with disabilities in last month’s Autumn Statement, Melanie Leech, chief executive of the BPF, stated: “There is also pressing need for increased investment in care homes. With 80,000 beds in existing care homes reaching obsolescence, encouraging new care homes development is critical and will lead to improved care for elderly people – particularly as newer care homes reduce falls and patient harms significantly – as well as providing savings to the NHS and local authorities.”

So how is the design community responding to this challenge? The Happi (Housing our Ageing Population: Plan for Implementation) reports of 2009 and 2012 have marked a big step change for the industry with good design principles becoming central to a new generation of specialist and extra-care housing for older people.

The Intergenerational Foundation argues that the UK’s housing crisis is not so much one of supply as allocation and that interventionist measures should be adopted to encourage older people to downsize. They estimate that this would help release onto the housing market an estimated 25 million surplus spare bedrooms in under-occupied properties.

Consequently, a key economic advantage of intergenerational housing is that as well as providing housing for older people, it assists in providing new housing for younger people currently priced out of the housing market. Additionally it provides the major social advantage of placing older people within a mixed community, addressing a common complaint that the “retirement village” model unwittingly imposes loneliness and isolation among its residents.

Up until recently intergenerational housing has remained relatively rare in the UK, at least within a non-familial context. In England less than 10% of over 70-year-olds live in a multigenerational household. While this figure is higher than those for some European countries, it is significantly lower than in Japan where more than 40% of over 70s live in a mixed household of this kind.

When it comes to multi-generational (non-familial) housing developments, England tends to fare worse than its European and US counterparts where this kind of housing is far more established. Reasons for this vary, but one significant factor is the lower uptake of co-housing models in the UK under which the intergenerational development typology can be more easily nurtured.

However, two recent residential projects perhaps provide an indication that the intergenerational model is finally gaining traction in the UK, possibly and ironically encouraged by the lack of affordable housing for young people. The recently opened Buccleuch House in Upper Clapton, north London, houses a mixed community that provides 41 extra care homes for older people, 28 affordable rent and shared ownership units and 38 flats for private sale. The scheme has been designed by housing architect Levitt Bernstein and built by Hill.

And over in Ramsgate, Kent, Jentex Village has recently won planning permission. This scheme, designed by Richard Morton Architects, promotes a radical mixed community within a rural setting that places a 56-unit extra care scheme among a mixed house-type development of 25 family houses and 31 houses for older people. Thirty per cent of the housing is affordable.

While both schemes follow the intergenerational concept, the inherent versatility of the model is proven by the fact that the developments look very different. Buccleuch House provides a contemporary response to the hard urban edge presented by the 1930s council housing blocks and grand Victorian townhouses that line Clapton Common. And Jentex’s array of cottages and bungalows is acutely sensitive to local rural vernacular.

But both schemes provide a critical insight into the characteristics of intergenerational housing and the social, economic and design potential it offers the UK’s constrained housing market. 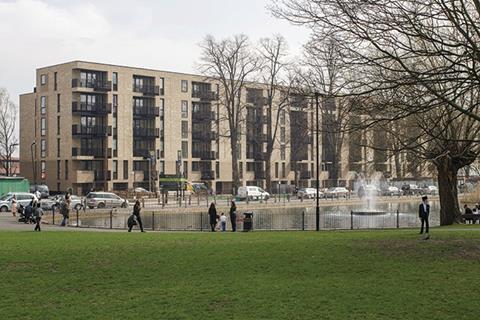 The design term describes Buccleuch House as ‘a model for creating housing within a mainstream development’. It features a contemporary urban block set among landscaped gardens 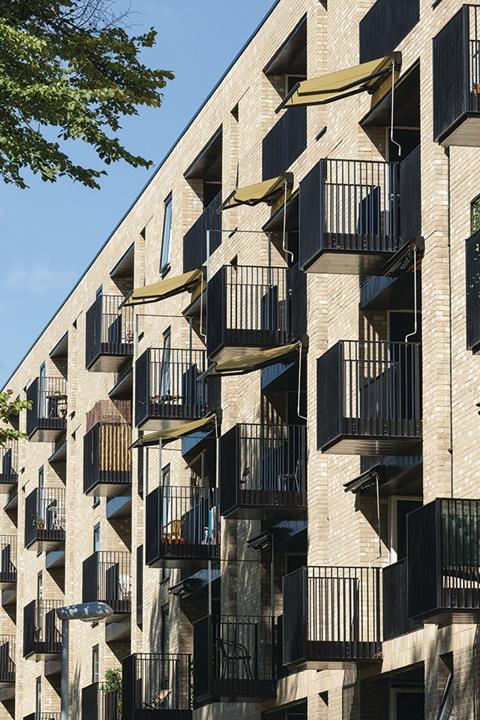 How common is intergenerational housing?

Not common enough. Often older people say they don’t want to live in isolated developments surrounded only by other old people (the retirement village model). If there were more of these smaller clusters of homes for older people integrated in mainstream developments we would be going some way to meet the need for more appropriate housing for older people.

What features of Buccleuch House are specifically generated by the intergenerational housing model?

What makes Buccleuch House so interesting is that it’s a microcosm of a mixed-tenure, multicultural, multigenerational community. It’s a great example of how families, young couples and older people can co-exist side-by-side within a single building.

You have to look quite closely to spot how the design of the facade has been manipulated to respond to the needs of its diverse occupants. This is most evident in the balconies. The orderly, cantilevered, glass-balustraded balconies to the shared ownership homes at one end shift and offset in the middle section to give Orthodox Jewish residents a view of the sky as they celebrate the festival of Sukkot. At the other end, the older, supported residents enjoy year-round use of their flexible wintergardens.

It’s obviously been more complicated having multiple clients for one building; the funding needed to come together and key decisions taken jointly, but as there are no shared internal areas, the management is fairly straightforward now that it’s complete.

Overall, it represents a very civilised social and physical response to contemporary urban living. This fine-grain mix of different social, cultural, economic and demographic groups, each of which retains a distinct identity while feeling part of a wider community, feels enlightened and egalitarian. It’s exactly what we should be doing.

What role do schemes like this play in easing the housing crisis?

In addition to providing better quality and more accessible homes for older people, they also help to free up larger homes that they might previously have been occupying – whether in the private or public sector. Much needed family homes then become available to the affordable renter or private buyers.

Are there any obstacles to developing the market further?

There’s a lack of joined-up thinking and partnership between developers and specialist housing providers, especially if the level of independence of the homes requires support in terms of care/management.

Another obstacle is the perception among developers that older people’s housing might not sell or might even lower values of the general housing next door (if sale homes are involved). In reality, there is a huge potential market to tap, particularly the middle market.

Other homeowners might actually like having older people around as they tend to be around more in the day, so good for security (and babysitting!). 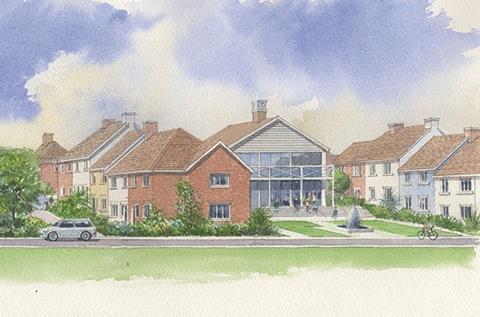 Jentex Village is described as ‘a community for all ages’ and employs a vernacular aesthetic that reflects its rural setting. The masterplan arranges cottages and bungalows around a series of parking courts and courtyards 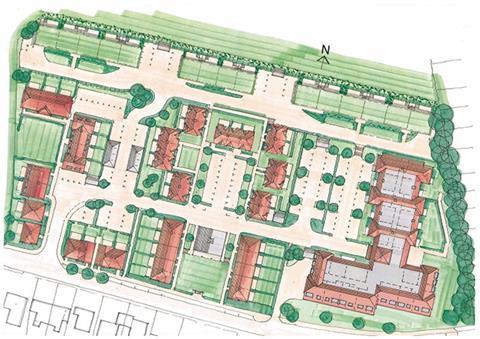 How common is intergenerational housing?

Generally it has been unusual in the UK for age-restricted housing and family housing to exist side by side on a single site, the stereotyped perception being that this will lead inevitably to friction when footballs land among the prize begonias. Currently, however, I am working on three schemes – the Jentex project and two others at Medstead in Hampshire and Leatherhead in Surrey – where these taboos are finally being broken, and it looks inevitable that the much-trumpeted starter home initiative will make such hybrid schemes much more common.

What features of Jentex Village are specifically generated by the intergenerational housing model?

The mixed character of the scheme derives from the site owner’s determination to create a legacy that would serve the needs of Cliffsend village within which the site lies. At the outset this vision centred around older people’s housing which is very much needed in the area. But intensive consultations with housing officers, planners and villagers revealed that there was also urgent need for family housing and starter homes. A reconsideration of the relatively large five-acre site led us to the conclusion that an intergenerational scheme might be a possibility.

The community house which lies close to the centre of the scheme will, we anticipate, be a key feature creating a bridge between generations. The standard solution would have relied only on communal facilities within the extra care scheme but here these facilities are kept separate, and in some cases duplicated, within the community house so that they can be enjoyed equally by all the residents, young and old. By intelligent use of the flexible spaces within the building it can provide for a playgroup in the mornings, U3A classes in the afternoons, and community dinners in the evenings to name just a few of the many possibilities. It is also envisaged that the building will provide a small shop and a base for outreach care to older people in other villages nearby.

The overall planning of the site also helps to make the intergenerational strategy into a workable reality, with the housing grouped not along estate roads but around a number of managed, landscaped spaces each with its own identity and age profile. A similar strategy used in the Medstead and Leatherhead schemes aims to allow different age groups to co-exist without friction while also enjoying the benefits of a fully mixed community.

What role do schemes like this play in easing the housing crisis?

The schemes, being mixed, will actually meet the various local needs much more effectively than would be the case with a set of larger, single-age schemes, more widely scattered.

Are there any obstacles to developing the market further?

Overturning the prejudice against such mixed schemes will not always be easy – it will probably not work on smaller sites or in cases where a broad balance of numbers cannot be achieved. It also needs additional care in the design and will certainly be easier on managed sites. To give a high chance of success will be the inclusion of community facilities such as those at Jentex, open to scheme residents and villagers and giving a real hope that the whole can be greater than the sum of the parts.