The tracker: Back to reality

Construction activity declined in May, following an improvement in conditions over the previous couple of months. The activity index fell 11 points to a six-month low of 44, and declines were registered across all the sectors. The most marked fall was in the non-residential activity index, which dropped 14 points to 45, the lowest reading since November last year. The residential and civil engineering activity indices both posted 48, declining by three points and five points respectively.

Orders remained below normal for the time of year in May with the orders index falling three points to 41. While the residential and civil engineering orders indices were in negative territory, the non-residential index posted 50, suggesting normal order books for the season in the sector. Panellists again reported an increase in tender enquiries, with the index above 50 for a second successive month.

The outlook for employment, however, remained gloomy, as the employment prospects index edged down three points to 37, indicating that firms anticipate reducing staffing levels over the coming three months. The index has now been below 50 for 29 successive months.

Insufficient demand was once again a constraining factor for around half of respondents, while financial issues were reported as having an impact on activity levels by 17% of firms. Just over a quarter of firms indicated that there were no constraints on their activity.

According to CFR’s Leading Construction Activity Indicator, construction activity will continue to contract over the coming three months, albeit at a declining rate. The index will edge up to 49 in July and remain unchanged at that level in August.

The Leading Activity Indicator uses a base level of 50 - an index above that level indicates an increase in activity, below that level a decrease. 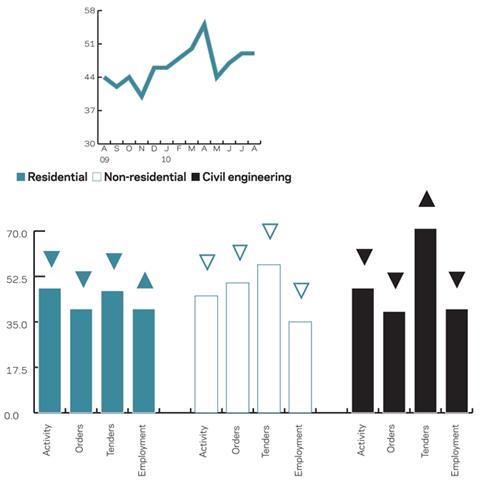 In May, around 14% of building firms surveyed indicated that material costs had fallen over the past year, compared with almost 20% three months before. The proportion of building firms reporting annual material cost inflation of between 2.6% and 5% rose from 42% in February to 46% in May. Around 22% of residential and non-residential firms reported that material costs had risen by more than 7.6%, broadly unchanged from the proportion three months earlier.

More than half (56%) of civil engineering firms reported annual material cost inflation of between 2.6% and 5%, while almost 17% said inflation rose by more than 7.6%. 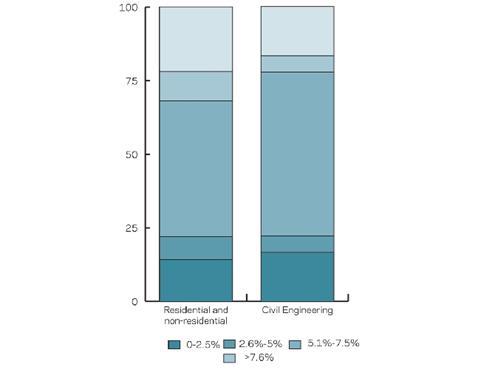 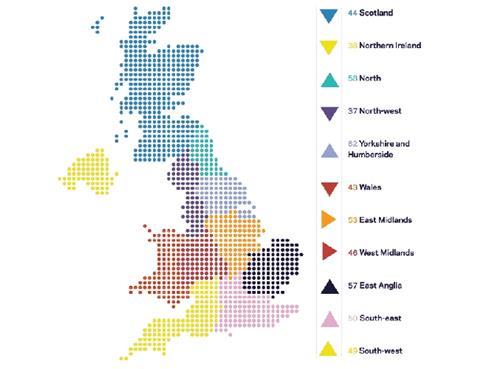 Five of the 11 regional indices rose in May, and two remained unchanged. The strongest improvement was in Yorkshire and Humberside where the index jumped 12 points to a 42-month high of 62. East Anglia’s index rose by seven points to 57, taking it into positive territory for the first time since September last year.

The indices for the South-east and South-west both edged up one point to 50 and 49 respectively. It was the first time the South-east’s index had not been below 50 for seven months. The East and West Midlands’ indices remained unchanged in May.

At the other end of the scale, the Welsh index fell by 10 points to 43, taking it below 50 for the first time in six months. The North-west’s index declined by eight points to 37, making it the worst-performing region. However, Northern Ireland did not fare much better, with its index falling by seven points to 38. In Scotland, the index fell by three points to 44.

The UK index, which includes firms working in more than five regions, edged down again by one point to 54.

This an extract from the monthly Focus survey of construction activity undertaken by Experian’s Marketing Information Services division on behalf of the European commission as part of its suite of harmonised EU business surveys. The full survey results and further information on Experian Marketing Information Services’ forecasts and services can be obtained by calling 0870-1968 263 or logging on to www.experian.co.uk/economics