Bad weather caused the market to contract in December and the ongoing downward trend could see firms reducing their headcount. Experian Marketing Information Services does the detail

Construction activity contracted at a faster pace in December than in the preceding month as disruption caused by the bad weather took effect. The activity index fell by five points to 42, the lowest level in 13 months.

Although the level of enquiries for construction work rose in December last year, firms continued to struggle to convert these into actual orders. This was highlighted by the index for the latter remaining below 50 for the 30th consecutive month - suggesting orders were lower than normal for the time of year.

This uncertainty was leading firms to reassess the size of their workforce. Despite creeping up one point to 39, the employment prospects index remained well below the no-change mark, suggesting firms intend to continue reducing their headcount over this quarter.

Insufficient demand was much more of a problem in December 2010 than in the previous month. Almost half of the respondents found it to be an activity constraint - a much higher proportion than the 30% who said the same in November.

Bad weather (19%) remained an issue, while finance was constraining activity levels for about 12% of survey participants.

According to CFR’s Leading Construction Activity Indicator activity levels will continue to contract in each of the months this quarter, although at a progressively slower rate. After increasing by two points to 48 in February, the index is projected to rise by another point in March. 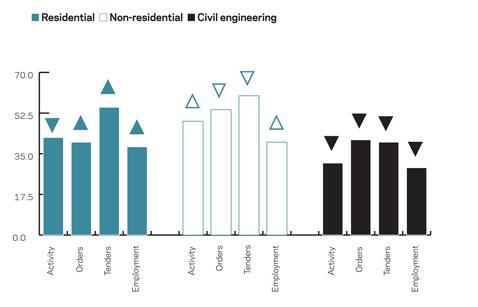 In December 2010 only about 12% of the residential firms surveyed had enough work in hand to keep them ticking over beyond the six-month mark, less than the proportion that reported the same three months earlier (almost 15%). Meanwhile approximately 32% had won enough work to keep them going for between three and six months - a much lower percentage than those firms active in the non-residential sector (43%).

About 48% of firms involved in the latter construction category had less than three months of work in hand.

The civil engineering sector was in a difficult position, with only about 8% of firms having enough work to keep them active beyond six months. Almost 38% of non-building companies had work in the pipeline to sustain them for between three and six months. 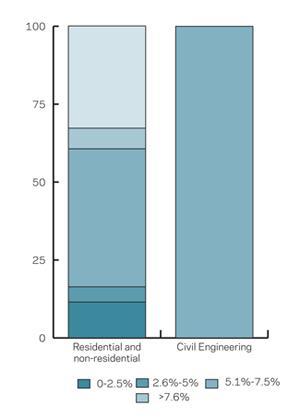 The indices rose for only two of the regions in December 2010. For Yorkshire and Humberside (a six-point increase to 44) and Wales (a one-point increase to 43). Meanwhile at 45 and 40, the indices for the North-west and Northern Ireland, respectively, remained unchanged from the preceding month.

East Anglia and Scotland saw the largest drops in their indices, of six points, with the figure for the former falling to 49 and the latter to 36. The index for the West Midlands also reached 36, although the decline was slightly smaller at five points.

In December the figure for the East Midlands fell below the 50 mark for the first time in three months, with a decrease of four points to 47. Reaching 49, the South-west index also fell below the no-change mark as it declined by two points.

Although the indices for the North and South-east also fell, by one point each, the figures remained above 50.

The index for the UK, which includes firms working in five or more regions, posted 51, four points below the November outturn. 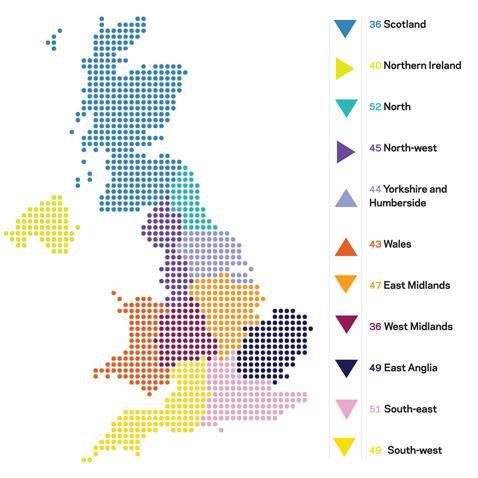