In 1978, Building ran an article on a poem named The Building Site 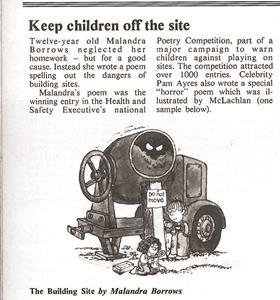 Keep children off the site

Our image of health and safety in the construction industry in seventies Britain is often rather a dim one, yet it was in this decade that the seeds of the UK’s modern safety culture were sown. The Health and Safety Executive was created by The Health and Safety at Work Act 1974. And a look through our archive from a few years later finds at least one person that was ready to kick up a fuss about the issue. In this particular case, however, it was not, as one may expect, a government minister or trade union general secretary. Nor was it some investigative journalistic firebrand, or a concerned whistleblower. It was a 12-year-old girl with poetic aspirations.

In 1978, Building ran an article on a poem named The Building Site. The author of the piece, Malandra Borrows, had just won the Health and Safety Executive’s national poetry competition for her contribution. The poem outlined the dangers present when children played on building sites. Malandra, aged 12 at the time, did a wonderful job of providing an entertaining and informative poem that educated children about the risks.