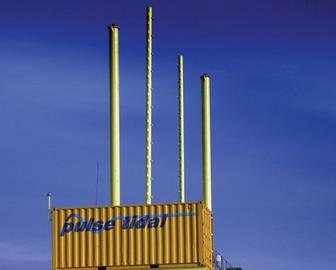 The prototype, developed by Pulse Tidal, consists of horizontal blades that move up and down with tidal streams to drive a generator.

It is generating 100kW but full- scale units would be designed to generate 1MW each, and would be arranged in arrays of five to 30 units.

Whereas the prototype (shown with its blades raised above the water in maintenance position) has a significant structure above the water line, future plans are to have fully submerged machines.

“There would be no visual impact,” said Howard Nimmo, com­mercial director of Pulse Tidal.

Units need to be placed so that they do not impede shipping (the Humber estuary is the UK’s busiest shipping area), and should not affect the eco-systems of estuaries provided that the amount of energy they absorb does not exceed the “significant impact factor” of 15% of the total tidal energy.

On this basis, Nimmo estimates that the units could generate up to 1GW from British tidal waters, a significant proportion of the 4-5GW of total tidal energy believed to be available for exploitation.

He believes that once 100- 200MW worth of tidal units have been commissioned, the energy will become cheaper to produce than offshore wind, for which the units have to be positioned further from the coast.

Nimmo says that because water is denser than air, tidal generators occupy less space than the equiva­lent wind generators.

Pulse Tidal is negotiating a posi­tion for its first full-scale unit, which it hopes will be in place by 2012.

The prototype, which is sited just off Immingham Dock, is providing electricity to Millennium Inorganic Chemicals on the south bank of the Humber.