Consultants grew their UK staff by 5% overall during the past year, according to this year’s Building Top 150. But where was the biggest growth and are cuts on their way as the post-Brexit fall-out makes itself felt? 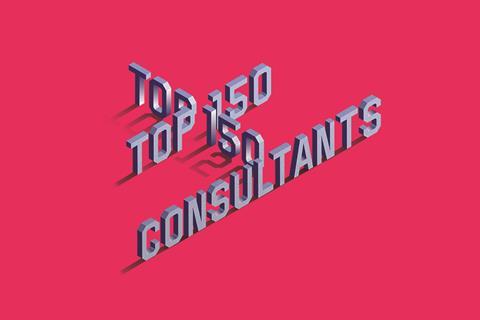 Building’s annual league table of the biggest UK consultants by number of employees - which includes surveyors, architects, engineers and project managers – paints a picture of steady if unexceptional growth. On average, firms increased both their number of chartered staff and their total UK staff by around 5%, in a year where the rush of mergers and acquisitions seen in the previous five years finally abated. But any suggestion of quiet, benign progress belies the reality of turmoil in many boardrooms over the summer, and there are no prizes for guessing the reason: Brexit. As Vince Clancy, chief executive of consultant T&T - which this year became the UK’s largest quantity surveyor – says: “There’s no doubt what’s at the top of every corporate agenda at the moment. We’ve seen a big shift in sentiment.”

In fact, the sentiment survey taken as the league tables were compiled - largely in the month before the Brexit vote - showed that businesses were already more cautious about future prospects than a year ago. Where last year two-thirds of the Top 150 were optimistic about the UK’s prospects, this year just 43% were; where 58% last year said they expected trading conditions to improve, this year little over one-third did. So, what does the data tell us about which firms are winning in this more uncertain environment? And if this is how firms felt before the Brexit vote, how on earth are they setting themselves up to deal with the aftermath?

Overall, the top 10 shows little shift in the position of the biggest firms. Most notable is the continuing success of Mott MacDonald, which allowed it to leapfrog Aecom to the number two spot. US-owned Aecom fell to third place after reporting one of the sharpest drops in the league tables, with the number of chartered staff on its books falling by 14% in the year after it joined forces with URS.

In the QS world, the drop-off at Aecom and a recalibration by Arcadis of how many chartered staff it employs has allowed T&T to get to the top spot with a 10% leap in QSs employed. Arcadis fell from first to sixth spot, but the firm said that didn’t reflect a real change (it says it has taken on 700 people already this year and that the number of QSs employed will be either the same or slightly higher now than last year), but instead the difficulties of getting an accurate picture after the merging of the back office systems of Hyder and EC Harris. Gleeds was the stand-out performer among the larger QS practices, rising from 7th to 3rd place in the table after registering a 41% growth in the number of qualified QSs employed.

However, as in politics, in construction the operating environment pre-summer seems almost a lifetime away. So much - potentially - has changed, but trying to get a handle on how the post-Brexit vote economy will perform has been difficult during the “phoney war” of the summer. According to Mark Lacey, founding partner at central London QS Alinea, there are already rumours of big consultants making redundancies, but nothing has been confirmed.

“There’s no evidence so far that that is the case so we go on. The summer period gets quieter each year, so it’s very hard to judge, though we’ve actually got more potential work coming through than last year. I remain cautiously optimistic.”
Downturn next year?

Richard Steer, chairman of Gleeds, expects a downturn, but believes that it won’t materialise until 2017. “We’re not seeing any effect yet, but we don’t expect it to start biting until household incomes start getting stretched around Christmas. So we’ve got to be cautious for the next few months. Brexit has really spoilt the party.” T&T’s Clancy says: “There’s definitely a degree of caution that wasn’t there six months ago. Certain schemes have been paused, particularly those that are developer-led or institutionally funded, but it’s not material to our business at this point. At the same time, the workload remains very high, and the facts in terms of bids and tenders are as busy as ever.”

Working out how to live with this uncertainty is clearly the task for consultants in the next six months at least. Hanif Kara, founding director at high-end engineer AKTII, says the firm’s January decision to move its head office to Derwent’s White Collar Factory early next year isn’t one he’d necessarily have made now. “The place Brexit puts you in is that you can’t make any concrete plans until at least April. At the same time, you can’t change what’s already in place. Moving to White Collar Factory will be fantastic, but if Brexit had already happened it’s the kind of thing we probably wouldn’t have signed.

“Some projects have slowed down, and some have simply stopped, but some foreign investors are being more proactive. So we’ll probably not overly invest in research or travelling out to win jobs for the moment. But the forecasts are so confusing, to try and predict anything is virtually impossible.”

What consensus there is suggests that commercial schemes backed by developers or financial institutions are more likely to pause, as are high-end residential schemes in London. There is more confidence that good recent growth in infrastructure – particularly the energy and water sectors – will continue.

You can’t get the staff

Nevertheless, this level of uncertainty puts firms in a quandary about recruitment. The pre-Brexit survey found three-quarters then planned to increase staffing levels in the year ahead. Certainly, current workloads are still so high that many firms are still struggling to resource jobs. Arcadis, for example, still has 200 vacancies, according to Bill Maynard, the firm’s head of recruitment, who says securing talent remains at a premium. The firm has actually brought more staff in this year than expected.

“Our attitude hasn’t changed, he says. “The reality is it is not easy to recruit, not easy to find talented people.” In fact, he says, the uncertain economic and political backdrop in some ways makes it harder to bring needed people in. “We’re seeing a little bit more caution from candidates. The decision to change jobs is potentially higher risk than it was before Brexit, so recruitments that would have been wrapped up in three weeks are taking a bit longer.”

Of course, the reason staff feel a greater degree of risk moving job is the fear that an imminent downturn will leave them exposed if cuts have to be made. This uncertainty is likewise making some firms think twice before taking on more staff. Gleeds’ Steer says: “We haven’t put a freeze on recruitment, but we’re taking a very cautious approach - there’s a definite slow down. Our HR team were probably sending out several letters a day a few months ago, but there’s a general feeling this is slowing down.

“My guess would be that by next year you’ll find a drop in the number of people employed by the sector.”

Continued high workloads coupled with caution taking more people on means that firms are having to make increasingly efficient use of the people they have - prompting both Gleeds and Arcadis to try and get staff to change their specialisms when jobs end. “We’re trying to move people into the areas of higher demand, such as infrastructure and energy,” says Steer.

Maynard adds: “One of the plus points is that our workforce is becoming more flexible than ever before. If resi is weaker, then we’ll try to flex people into different areas.”

At the same time, the Brexit vote means there is a possibility that EU nationals working in UK firms may have to or want to return to their original home countries. This is a particular problem for firms like AKTII, where 70% of staff are European. “It worries us a lot. We need the absolute best quality staff, and if anything happens that means we can’t employ based on merit it’s a concern. But we’re not suddenly going to change how we employ people now,” says Kara.

If firms do start cutting back in the next year, many will hope caution exercised since the global financial crisis will save them from financial difficulties. The survey data shows that, this year at least, the sector has grown leanly, with all of the increase in staff levels coming from additional construction professionals. Numbers employed in back office and support functions have remained static.

Clancy says at T&T this is part of a deliberate policy to ramp up investment in technology to try to make support functions as efficient as possible, at the same time as the move to digital construction and BIM continues to drive changes in the way consultants provide services to clients. “While all the talk is about Brexit right now, we shouldn’t underestimate the importance of technological change. We genuinely believe the way we deliver services will fundamentally change in the next 10 years and it remains absolutely right at the front of our minds.”

Genuinely keeping focused on these longer term but more fundamental shifts in the way the industry operates while navigating the choppy economic waters could mark the difference between success and failure longer term. With so much still unknown, the next 12 months will be difficult for everyone.

Barbour ABI, provider of construction intelligence services and Building’s sister company, contacted more than 500 firms for this year’s Building Top Consultants’ Survey. They were sent a survey form asking for details on the number of chartered staff, non-chartered and technical staff, and domestic and worldwide fee incomes. Firms are ranked according to total UK chartered staff, and for QSs, architects, engineers and project managers by chartered staff in each respective discipline. Practices were also asked questions relating to: staff recruitment, wage patterns, margins, areas of work, and work expectations.

The survey relies upon firms completing and returning the annual survey form. For a variety of reasons firms sometimes decide not to take part. Only those firms that complete and return the survey form are included in the survey. Where firms have made two submissions, we have used data from the most complete submissions. Where firms have omitted answers from their response we have filled the space with a “-” symbol.

Where the given total chartered staff number for a profession didn’t match the total staff numbers listed for types of that profession (eg. structural engineer, electrical engineer), then the total professional chartered number that was submitted has been used.
2016 revenue figures for these companies are approximate or forecast or unaudited:

Firms with any questions about the survey, or that wish to be included in the 2016 survey, should contact Barbour ABI. (www.barbour-abi.com or by email to info@barbour-abi.com).