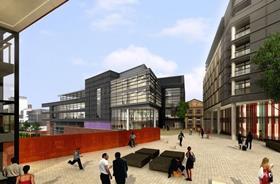 The workers were employed by a subcontractor on the job.

The nine men, who were found to be in the UK illegally, were all aged between 22 and 56. Six had overstayed their visas, two had entered the UK illegally and the other was a failed asylum seeker.

Following a dawn raid on the site last Wednesday, three of the illegal immigrants have now been released on bail while the remaining six have been detained.

The 10 acre Stephenson Quarter development has been part funded by Newcastle Council, which hopes it will create jobs in the area. The first phase of the scheme, where the men were working, includes a Crown Plaza hotel, an office building and a multi-storey car park.

A spokesperson for Miller Construction said it had supported immigration officers during the visit. She added: “Miller Construction requires all of its subcontractors to comply with UK legislation regarding eligibility to work of their employees.”

A spokesperson for developer Clouston Group said the firm was “shocked and disappointed” to hear that illegal immigrants were working on the scheme.

She added: “We refuse to speculate further but, as the developer, we and our main contractor Miller Construction are committed to using local people and developing local skills wherever possible on this important project.

“We are supporting Miller to remind the supply chain and all sub-contractors on site about the conditions they are meant to work to. Aside from national legal obligations, terms and conditions are quite explicit in all contracts with suppliers.

“All sub-contractors coming on site must sign to confirm that they have appropriate procedures in place to cover health and safety, employment and other legal requirements.”

A Home Office spokesperson said: “Illegal working is not victimless. It defrauds the taxpayer, undercuts honest employers and cheats legitimate job seekers out of employment opportunities.”