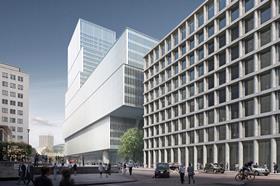 David Chipperfield Architects’ £600m Elizabeth House scheme on London’s south bank has been dealt a blow as a judge ordered a full judicial review of communities secretary Eric Pickles’ decision not to call in the scheme.

Earlier this year Pickles declined to call in the scheme, by developers Chelsfield and London & Regional Properties, but English Heritage and Westminster council took legal action to get the decision reviewed.

Today, a judge ruled there should be a full judicial review.

A spokesperson for English Heritage said they were “pleased with the decision”.

She said: “English Heritage and Westminster City Council took the unusual step of requesting a judicial review because we are seeking clarity on how the secretary of state exercises his judgement when considering complex and potentially controversial cases.

“While we think the principle of redeveloping Elizabeth House is acceptable, we objected to the current planning application because of its potential impact on the Westminster World Heritage Site and felt that this important issue should be explored at a public inquiry.”

The scheme is comprised of two buildings of 11 and 29 storeys high, containing office accommodation, 142 homes and retail space.

It would replace an existing 1960s building sitting between The Shell Centre and the former Eurostar terminal at Waterloo station.

The latest decision represents the second piece of bad news for David Chipperfield Architects in recent days after it was kicked off the team designing an extension to the Geffrye museum in the London borough of Hackney.