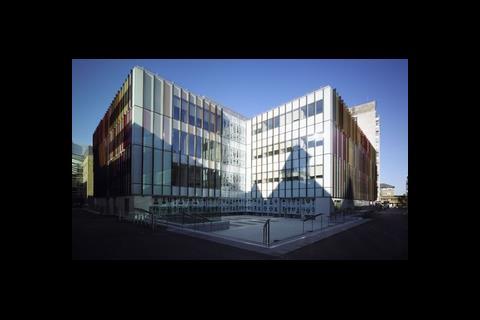 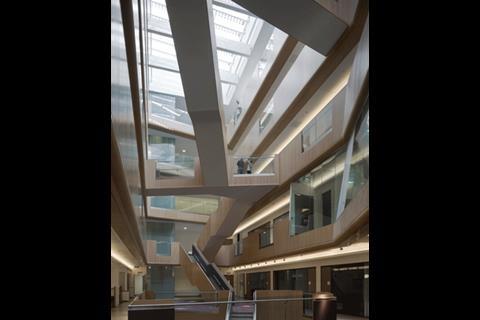 Staircases cut through the atrium in dramatic fashion, linking the six storeys and stimulating links between the occupants 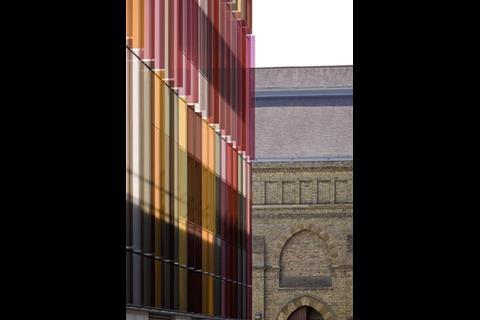 Oxford University wanted a mix of labs and social spaces to encourage scientists to swap ideas. Creative minds in the design team made it work with clever services integration

Oxford University wanted a mix of labs and social spaces to encourage scientists to swap ideas. Bright sparks in the design team made it work with services integration

The new biochemistry building at Oxford University brings the department’s lab rats out into the open. Instead of being concealed deep within the building, their ground-breaking work is done in laboratories arranged around the central atrium of the fully glazed block.

The coloured fins of the facades give the occupants some privacy as well as emphasising that this is not your normal laboratory building. Enveloped in glass, it provides six storeys of laboratories and study spaces surrounding the atrium, which is criss-crossed haphazardly by staircases and filled with artwork.

The £49m building brings together 300 lecturers, students and researchers who had previously been spread across Oxford’s sprawling campus. “The labs are pushed to the transparent exterior of the 12,000m2 facility to emphasise the importance of the biomedical research going on within,” says Morag Morrison of architect Hawkins Brown. “Central to the scheme in every sense is the atrium: it encourages scientific minds to exchange ideas at informal meeting spaces, kitchens and social hubs dotted throughout the six storeys.”

The atrium lets light flood into the centre of the building, down into the below-ground level. It is naturally ventilated and lit. Windows and roof vents open automatically to allow warm air to escape while fresh air percolates in via an undercroft. Foreman Roberts, the building services consultant, had the atrium airflow strategy modelled using TAS software by EDSL to determine the airflow rates and size of vents required. “We did initially look at providing a sealed and mechanically conditioned atrium space,” says divisional director Peter Bentley, “but we were trying to keep energy use to a minimum, so we went with a naturally ventilated atrium.” Mechanical ventilation was a must for the laboratories, however. Planning restrictions on the building’s height limited the plant that could be put on the roof. “We couldn’t put lots of plant up there,” Bentley says. “Our services devolved into on-floor air plant systems. Each floor is served by its own VAV air-conditioning system.”

Ductwork and plant is installed in the 800-1000mm ceiling void in a tight maze that winds around the twin structural beam construction. “Routing of services was incredibly complicated and Crown House Technologies did a wonderful job. The levels of detail on 3D co-ordination drawings was tremendous and without them we could well have got into trouble,” says Bentley.

Ventilation to the laboratories is provided via supply and extract VAV boxes with LPHW terminal reheat. The packaged system from Trox incorporates a Lon-based lab control system interfaced with a Trend BMS, which controls the entire building. The labs have a constant inward airflow to prevent escapes and some include fume cupboards with VAV control to their extract. This is integrated with the room supply and extract to maintain a balanced airflow.

The laboratories all have good natural lighting because of their position on the building’s perimeter. Steps have been taken to reduce solar gain via the glass roof and on the south facade. All glazing is solar control glass and the glass roof has integrated photovoltaic panels, which provide shading as well as contributing to the building’s energy needs. Below them, in the ceiling of the atrium, white fabric sails help to direct sunlight away from workspaces.

“The main issue is on the south facade,” says Bentley. “Here, in addition to the external glazed fins, there is an internal secondary glazed facade – a small buffer zone – and some of the laboratory extract air is taken from this buffer zone, so removing solar gain.”

Even with these measures in place the sun will warm the building. Foreman Roberts, with Hawkins Brown, designed it on the understanding that the temperature will be around 19-20C throughout the year, with a maximum of 27C for no more than 2.5% of hours annually. “Heating is provided via a gas-fired LTHW condensing boiler at roof level,” says Bentley. “This serves circuits for the air handling units, the VAV terminal reheat, radiator circuits to core areas, plus the underfloor heating and cooling system to the atrium areas.”

The underfloor heating is a changeover system that provides compensated temperature control, heating during the winter. There is a dead band when outdoor temperatures are at 18-21C and in summer it changes over to cooling, via air-cooled chiller plant on the roof.

“It is the university’s policy to be able to interconnect the various buildings on the site and, by means of manual switching, to back-feed buildings from other supplies,” says Bentley. “So there is a series of low-voltage feeds from the new building out to existing buildings, which can provide limited capacity in the event of maintenance or a supply failure.”

Services maintenance in the laboratories has to be kept to a minimum, so local electrical distribution cupboards have been made accessible from the atrium. Inside the labs, three-compartment dado trunking carries small power, telephone and data cabling. Three-phase equipment is fed from the distribution boards to commando-type outlets.

“The electrical services planning required lots of work with the various user groups early in the project to try to nail down the space planning and power requirements,” Bentley says. “And still they are coming back to us with more requests! That is the norm in this type of heavily serviced building project, though. That’s why we went with dado trunking for the small power.”

The VAV systems are designed relatively flexibly in that grill positions can be moved around in the ceiling and sufficient capacity has been built in to accommodate upgrades and future changes.

“The building is by its function a relatively high energy user,” says Bentley, “but our work has endeavoured to minimise energy and best manage the way it is used. And, to this end, we will be working closely with the building manager over the next two years to monitor all systems and make changes where necessary to ensure the building runs to maximum efficiency at all times.”

Birth of an idea

Hawkins Brown was asked by the university to investigate options for the reuse of the Hans Krebs Tower, one of six biochemistry department buildings. This study swiftly concluded that any solution retaining the tower would not resolve many of the department’s concerns about collaboration and integration of research groups, the requirement for state-of-the-art facilities and the need to attract world-class scientists.

These factors, combined with issues of location, historic context and university vision, generated an exciting brief for the site in the centre of the university’s science area. Proposals were developed for a new-build project in two phases, each about 12,000m2.

Planning had a significant impact. The Carfax height restriction, set by the medieval Carfax tower, limits new buildings effectively to four storeys above ground with limited plant spaces on top. This meant we and Foreman Roberts had to treat the roof plan more as a “fifth elevation” than a plant area. Plant has been distributed in two distinct areas, one internal and one external, concealed by screens. Careful consideration of the five atrium ventilation chimneys was required as they had to be above Carfax height.

Internally, the desire for a high-quality building with the wow factor led to a high degree of services integration. The plan is in three key areas: the atrium and write-up spaces, the main laboratory spaces and the support spaces. Each was treated differently regarding services integration.

The atrium has a high degree of acoustic timber cladding and other acoustic-absorbent materials. This is also the space that generates much of the building’s impact, so services have mainly been concealed. There is no dado trunking and ceilings are suspended plaster-board. Access has been resolved carefully to ensure the building can be rewired if necessary but without suspended ceilings.

The main laboratory spaces were designed with the highest possible ceilings and with services integrated into a consolidated services beam. There are some tiled ceilings but, again, these spaces are mainly suspended plasterboard. In the support spaces, the need for access and flexibility led the design with suspended tiled ceilings and dado trunking.

The time taken by Hawkins Brown, Foreman Roberts, Laing O’Rourke and Crown House to resolve all aspects of design ahead of construction ensured the best possible result.