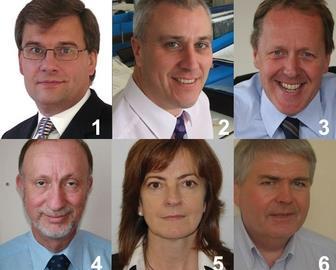 Andrew Burt (1) has been appointed international director of real estate for Europe, the Middle East and Africa at Johnson Controls. He will be responsible for driving organic growth while targeting new opportunities.

Stephen Appleton (2) has become an associate director at Ramboll Whitbybird, based at the Glasgow office. He joined from Dunwoody LLP where he earned the title of “sustainability champion”.

Uponor has appointed Peter Roberts (3) to be vice-president of its UK and Ireland operations. He was previously at Kingspan, where he was managing director of the pollution control businesses.

Faber Maunsell has recruited David Stork (4) as an associate director specialising in port and harbour work. Stork, who has 36 years’ experience in the maritime industry, will be based in the Birkenhead office.

Linda Robb (5) has joined AEI Cables as regional manager for Scotland. Robb, who will work out of Glasgow, will help develop and build brand awareness of the manufacturer’s products and services.

Logic Certification has recruited Steve Mulvany (6) to be scheme director. Mulvany, who will help develop new courses, has worked for industry notables such as British Gas, Vokera and Corgi.

Red Engineering has appointed Alana Dixon to lead its sustainability strategy. Dixon was formerly with the Carbon Trust and advised the London 2012 Olympics project.

Morgan Professional Services has recruited Graham Powell to be associate director, mechanical and electrical engineering services, in London. He joins from Chapman Bathurst.