The facades of large commercial buildings are changing. While glazing continues to be the predominant cladding material, the days of uninterrupted expanses of clear glass appear to be coming to an end. The material’s thermal performance is being placed under ever greater scrutiny, while the application of a reflective coating or film can starve a building of natural daylight. As a result, shading devices that are applied externally to reduce solar gain - such as aluminium louvres, perforated panels or blinds - are becoming commonplace.

However, there is a weak link in this system. Even a high-performing shading device can be undermined if the curtain walling bracket used to fix it to the building does not incorporate an effective thermal break. “The importance of sourcing curtain walling brackets with a comprehensive thermal break cannot be underestimated,” says Jon Claridge, operations manager at Laing O’Rourke Facades. “If the thermal break is compromised, then this can undermine the thermal performance of the entire facade.”

The problem is that the way in which traditional curtain-walling brackets penetrate the curtain-walling mullion makes them susceptible to cold bridging (among other issues). To help overcome this, in 2008 Levolux launched its Triniti Curtain Walling Bracket, which works by isolating the bracket from the mullion. 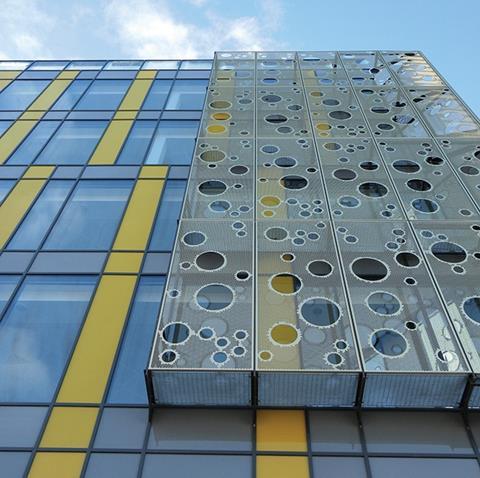 At the Fabrica office development in Manchester, Levolux’s Triniti Bracket was used to anchor the perforated aluminium panels and walkways to the façade.

The need for shade

In today’s built environment, it could be considered both ineffective and irresponsible to control internal temperature solely with mechanical cooling and air conditioning. Instead, there is an increasing focus on passive methods of maintaining internal comfort levels without increasing energy consumption.

Of these methods, solar control is one of the most critical. Solar heat gain can cause internal temperatures to soar to uncomfortable and potentially harmful levels, and even the most modern curtain walling system - one that includes thermal breaks between exterior and interior surfaces - will generate a degree of solar gain when exposed to direct sunlight for long periods.

Solar shading and screening solutions that prevent excessive solar heat gain, maximise daylight levels and reduce glare are therefore a key element of modern office design. The importance of solar shading can be shown by analysing the solar heat gain coefficient (SHGC) ratings of different systems. This is a measurement of the proportion of solar radiation admitted through a window or door - the higher the rating, the greater the radiation. For example, a double-glazed opening without any form of solar control will have an SHGC rating of around 0.65, whereas the same opening fitted with moveable horizontal fins will have a rating of around 0.1. 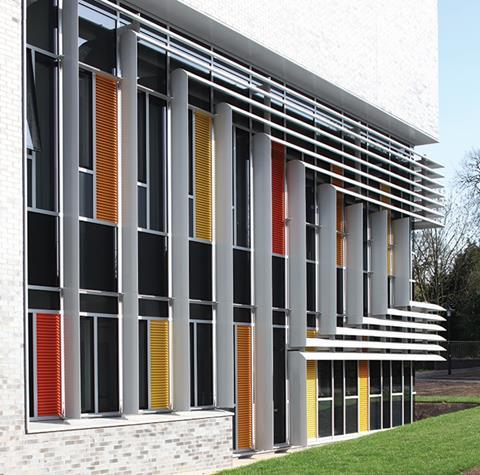 It is essential for architects to consider the SHGC rating before specifying a shading device - but it is equally essential that they understand that a very low rating can be undermined by the wrong curtain-walling bracket.

When Levolux was conducting research and testing prior to the launch of the Triniti Bracket, one of its key findings was that the choice of bracket for external shading devices can have a significant impact on the overall thermal performance of the building. Under Part L of the Building Regulations, the U-value - or thermal transmittance rating - of the building envelope of a new commercial building must be less than 2.2W/m2K. Modern double-glazed curtain walling will achieve around 1.6W/m2K, and values of less than 1.0W/m2K can be achieved, with the help of triple glazing. But if a bracket compromises the thermal break of the curtain walling, this can dramatically reduce the thermal performance of the framing system and will raise the U-value of the entire envelope, possibly by as much as 10%, according to Levolux.

In the case of curtain walling, the most conductive element is the grid of aluminium mullions and transoms used to secure glazing. If the thermal performance of the building is to be maximised, it is essential that the curtain-walling bracket isolates the mullion from any external fixture, such as a shading device. As soon as the aluminium body of a mullion is penetrated, its thermal performance is compromised and a cold bridge is created.

For this reason, elements such as mullions are specially extruded with air pockets and combined with other materials that help to reduce their conductivity. However, while many curtain-walling brackets purport to feature a thermal break, Levolux says that this is not always the case - when examined in detail, it is clear that the insulating material is not always comprehensive enough to prevent the mullion from being compromised. Wherever cold bridging occurs, usually at the point of least resistance, this creates ‘cold spots’ on internal surfaces which increases the risk of interstitial condensation developing inside the curtain walling system. This can potentially weaken the structure and lead to mould growth. 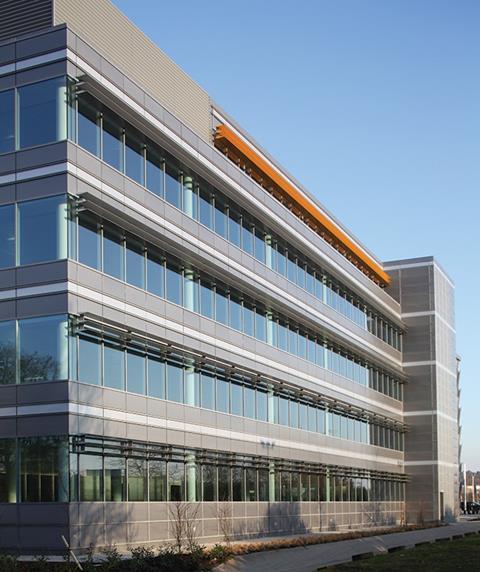 The Brooklands office development in Weybridge

Levolux’s thermally broken curtain walling bracket, known as the Triniti Bracket, is different to any other product on the market. When tested by the Centre for Window and Cladding Technology (CWCT), the Triniti Bracket recorded a thermal transmittance rating of 0.135W/K, when applied to a short-nosed curtain walling system. This is an improvement of 68% on a standard curtain-walling bracket wíith no thermal break, which has a rating of 0.416W/K.

The Triniti Bracket uses a low conductivity, insulating element, known as Firmalyne, to fully isolate the mullion from the bracket at the point of penetration. This is applied against the mullion using insulated bolt sleeves and screw caps, to optimise thermal performance. “Insulating the external support arm against the mullion is relatively straightforward, but the real trick is to insulate the bolts where they penetrate the mullion,” says Laing O’Rourke’s Jon Claridge.

Where the Triniti Bracket has been incorporated into curtain walling systems, it has been instrumental in helping to achieve U-values as low as 0.87W/m2K, about 50% lower than an average commercial building facade. The same tests calculated the heat loss per bracket to be just 0.17W/m2K.

By virtue of its fully isolated construction, the Triniti Bracket is also extremely resistant to noise and vibration transmission. In fact, when tested by the CWCT, the bracket was shown to offer approximately 95% isolation for the frequency band 2,000-5,500Hz. This significantly reduces the risk of induced or audible sound levels being transmitted into a building. 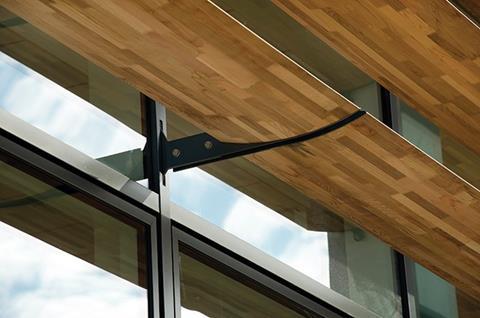 Taking into account the relatively low environmental impact of glass compared with alternative materials, it is likely to remain the most common specification for non-domestic external envelopes for the foreseeable future. When specifying facade solutions, be it curtain walling or brise-soleils, it is critical that architects and specifiers understand the link between maintaining a thermal break and achieving a low U-value.

More and more manufacturers and suppliers claim to offer high-performance, energy-efficient curtain-walling brackets, but it is important to check the detail to ensure that this will actually be delivered. Specifiers should inspect a sample bracket to verify that a thermal break is evident and the extent to which it performs, remembering that heat transfer will occur at the point of least resistance.

It is also critical to assess the strength of the bracket, as a thermal break can significantly reduce its loadbearing capability if it has not been designed correctly. In some cases, almost double the number of brackets are used because their strength is so compromised by the thermal break. It is imperative that claims of thermal or structural performance are challenged and, ideally, supported by an independent testing body, such as the CWCT.

One that is tried and tested is Levolux’s Triniti Bracket, proven to maintain an effective thermal break without compromising its structural integrity. Claridge, for one, agrees: “Of all the brackets I have encountered, Levolux’s Triniti Bracket is particularly impressive. Its innovative design allows designers to integrate external solar shading with curtain walling, while optimising the thermal performance of the facade.”

This feature was sponsored by Levolux.