We hope you enjoyed the cartoon of George Osborne on this week’s cover - if you haven’t already seen it, take a look here. George can be seen slicing up a tiny cake as we analyse how much he can help construction in the upcoming spending review and wonder if the industry will have to make do with leftover crumbs.

Politicians have been gracing the cover of Building in caricature form for decades, and as we rifled through old copies this week we came across one from the 1970s that made us chuckle. In fact, it was the cover of another June issue of Building and was published nearly 34 years ago to this day, on 22 June 1979. 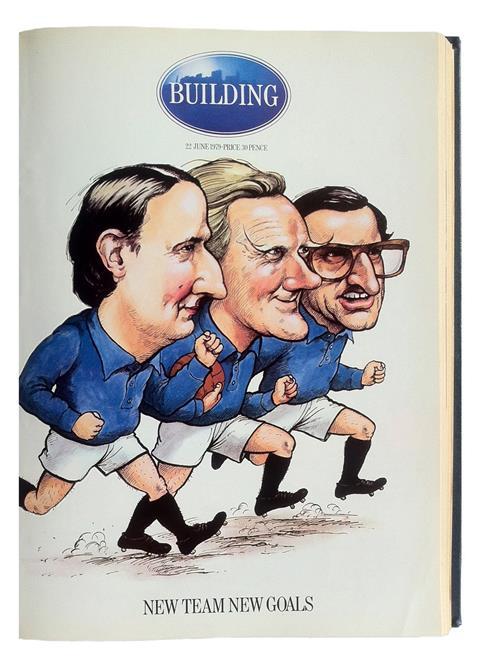 Fifty days previously, the UK had been through a major shake-up with a general election seeing Margaret Thatcher become the first female prime minister. Building’s headline was ‘New team, new goals’ and the cartoon on the cover depicts three ministers running in sporting attire; Michael Heseltine, secretary of state, John Stanley, minister of housing and construction, and Tom King, minister for local government and environment services.

The accompanying feature inside Building asked what the industry could expect from the next 50 days – and beyond. It includes a particular reference to ‘austerity’ that will sound familiar today …

“Now as then the message is one of long-term optimism but short term austerity, a view reinforced by last week’s Budget measures. Mr Heseltine obviously expects the industry to gear itself up to the new realities. His two ministers of state expect the same, indicated by two exclusive interviews overleaf”.

In short interviews, the lesser known John Stanley and Tom King talk about giving more freedom to local authorities and speeding up the ‘cumbersome’ planning system.

Thirty four years later, we find ourselves waiting to hear how much the current government will take on board the economic growth review undertaken by Heseltine last year. It included 89 recommendations, with a key vision for spending power to be given to Local Economic Partnerships, and progress is expected to be announced in Osborne’s Spending Round next week.