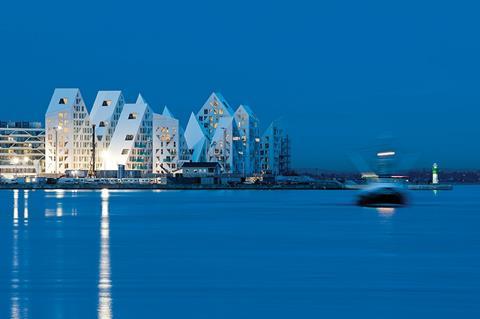 For a scheme voted the world’s “Best Residential Project” at this year’s Mipim, the Iceberg, a recently completed £28m, 208-unit housing development in Denmark’s second city of Aarhus, has reassuringly humble roots. “Daylight and views were the starting point” explains CEBRA architect and co-founder Mikkel Frost. “Everything else came later.”

Perched on an isolated northern promontory of Aarhus harbour, a crystalline cluster of white blocks rising from six to 12 storeys pokes furtively into the horizon. Their plunging ground to rooftop peaks and valleys form a relentlessly jagged profile whose rhythm is matched by the triangular windows sliced into the facades. It is a beguiling composition whose melodramatic power is increased all the more by the building’s solitary setting against the sea. Moreover, it offers a 50/50 mix of homes for sale and rent, thereby providing a rare example of institutional private rental investment. 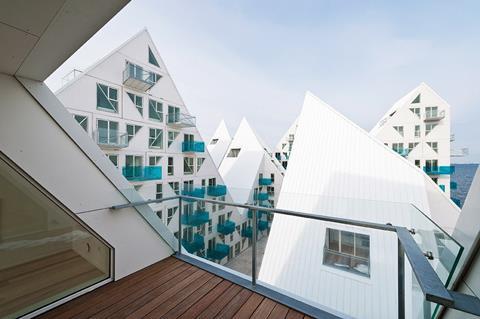 So how did all this come about? Well, as the development’s title might suggest, one key ingredient was Iceland. It was Icelandic money that initially financed the scheme back in early 2008, an arrangement that invariably seemed far safer then than it turned out to be months later when the global credit crunch and the Icelandic debt crisis took hold.

The recession is also an important factor in understanding why the Iceberg stands in splendid isolation and what role it plays within the wider urban context of Aarhus. Danish shipping is big business and despite having a population roughly equivalent to north London’s, the country possesses the fourth largest merchant fleet in the world.

Aarhus Port is the largest in Denmark and historically the city’s fortunes and infrastructure have been inextricably linked to its bustling maritime industry. However, as with the old London Docks, containerisation increasingly rendered the old Aarhus port unsuitable for modern shipping so a modern replacement is being constructed to the south of the city.
In line with the general de-industrialisation of urban watersides across western Europe, this has freed the old dock for redevelopment. The Iceberg is just one part of a massive harbour regeneration scheme that will eventually provide 800,000m² of accommodation and 12,000 workplaces for 7,000 residents. 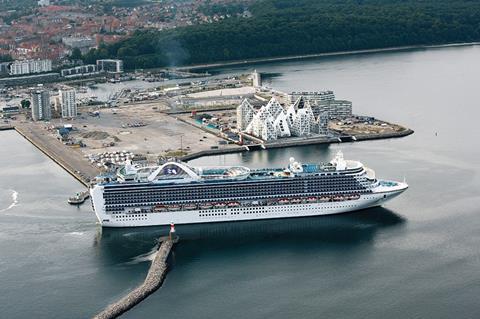 The wider harbour redevelopment will eventually link the Iceberg to the city and provide 800,00m2 of new mixed-use accommodation for 7,000 people. 3XM’s Lighthouse is just visible to the right of the Iceberg

The scheme will eventually be joined by a panoply of cultural, residential and commercial developments from some of the most prominent names in contemporary Danish architecture. These include the Lighthouse housing development by 3XN and the new Aarhus Library by Schmidt Hammer Lassen.

Although construction has started on some of these other schemes and Kjaer & Richter’s prominent star-shaped engineering building for Aarhus University is almost complete, the majority of the masterplan development was put on ice, as it were, by the recession due to its heavy reliance on Icelandic finance. Hence the surreal void between the Iceberg and the city.

However, the City of Aarhus, which still owns the site, was determined to show its strategic commitment to reconnecting the harbour area to the city by persisting with the Iceberg scheme throughout the downtown as a reassuring sign to its citizens of what was still to come. 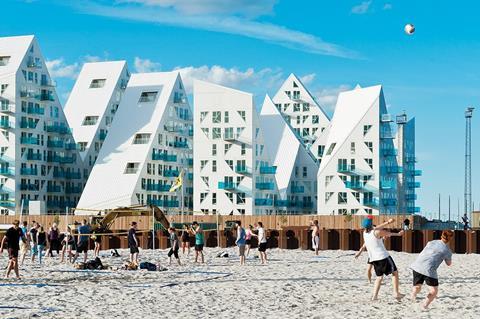 While the wider harbour redevelopment is stalled due to the recession, the City of Aarhus has promoted temporary leisure facilities on the land around the Iceberg

Despite its dynamic form and massing, the Iceberg occupies a surprisingly rational and rectilinear footprint. Three L-shaped blocks radiate from an axis centred on a fourth smaller corner block. The streets and spaces formed between the block open out towards the sea on each side.

Frost describes this distinctive layout as a defiant reaction to the harbour masterplan. “Most of the masterplan initially specified a grid of rectilinear, doughnut-like buildings with closed-off courtyards in the middle. But on a site like this, bounded on virtually three sides by water, this was the last thing we wanted to do.”

Their reconfigured plan also reveals the architects’ preoccupation with daylight, which was to eventually generate the buildings’ jagged profile. “The constantly shifting peaks and valleys were a way of opening up the scheme to ensure that daylight was dispersed evenly,” explains Frost. “It also meant that nobody was blocked by their neighbour and everyone has at least a partial view out towards the sea.”

With visible relish, Frost also describes how the development manoeuvred around the masterplan’s strict massing rules which stipulated a six-storey height limit. “By essentially slicing our buildings in half diagonally, we were able to stack them up to 12 storeys but in a way that provided the same volume of a rectangular building half as tall.” 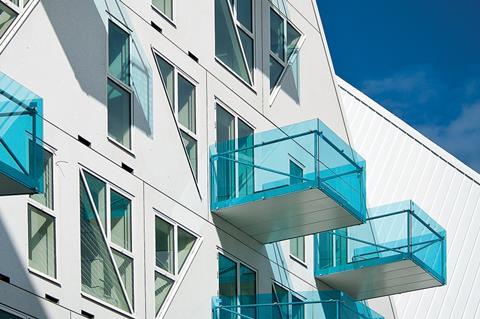 In an effort to reinforce the concept of daylight permeating the development, balcony colours dissolve from blue to transparent the higher they are located.

Away from its skyline, the Iceberg also displays fairly traditional building methods. The external walls are constructed from pre-fabricated polished concrete panels mixed with specks of terrazzo marble to provide a sparkling quality in bright sunshine. This composition was selected for its durability against the harsh sea air and saltwater.

The roofs are comprised of watertight standing seam steel elements with a single unbroken strip (applied by specialist Canadian steeplejacks) along the ridges. Despite their ostensibly abstract pattern, the windows too are rationally generated from multiple variations of just four square and triangular templates. 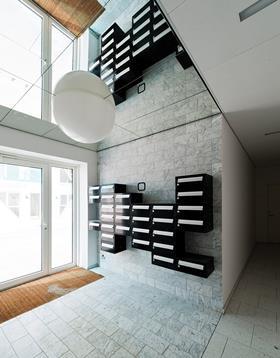 While theoretically the spaces between the blocks are open to the public, subtle manipulation of height and material imposes a hierarchy of privacy that, according to Frost, is rarely violated by non-residents. These spaces are slightly raised from the public areas around the building implying a notional boundary further emphasised by changes of material around property entrances and amenity areas and throughout the development.

The development also maintains a varied accommodation mix. Lower storeys feature two-storey townhouses and some ground floor commercial properties, the mid-levels are occupied by one or two-bed flats, and penthouses are located in the upper storeys with a single double-height space underneath each building “peak” across the site. Although no social housing has been provided, the City of Aarhus has committed to providing 25% affordable homes across the entire harbour regeneration site.

Frost describes the Iceberg as a “building designed inside-out where the inner quality determines the outside space”. This description rings true and despite the Iceberg’s stylised form, it’s dynamic massing and sculpted profile genuinely seem to represent a considered and intelligent architectural solution to the problem of how to disperse daylight and views between buildings on large housing developments.

Also, with its polar form, crisp, minimalist lines, democratic design instincts and spectacular setting, the Iceberg feels unmistakably Scandinavian, or at least what we British perceive Scandinavian architecture to be.

So, could a development like the Iceberg be built here? It is unlikely that a British local authority would retain ownership of such a prime piece of redevelopment land and the chances of it being rapidly sold wholesale to a private developer are high. The concept of managed institutional private renting is also still relatively rare in Britain too, although active measures are being taken to expand it, particularly in London. David Birkbeck of housing lobbyists Design for Homes goes as far to describe the Iceberg as a “model for the UK” as it is one of the “few examples of private rental investment in housing.” He also summarises it as a “flamboyant private sector model that makes renting attractive by using architecture rather than just service offer”. 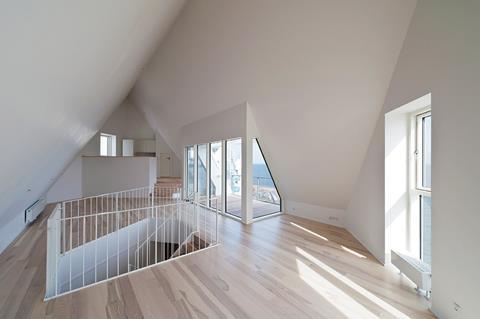 A single duplex penthouse occupies the peak of every block

But beyond these differences, the Iceberg is fairly conventional when it comes to mix, layout and construction. Ultimately, what really makes it unique perhaps from a British angle is its radical contemporary design. For with notable exceptions, Britain is a country which still, for various cultural, social and economic reasons, tends to cling to safer, more traditional design across the majority of its housing sector. This is certainly what most mass volume housebuilders persist in supplying to satisfy what they claim to be a direct demand - whether the chicken or the egg came first will always be open to debate.

Julian Weyner, partner at CF Moeller which is designing one of the neighbouring plots to the Iceberg, sums up the situation succinctly. “Unlike in Britain, there is no debate about modern vs traditional in Denmark, contemporary is the vernacular.” And when it’s executed with the craftsmanship and ambition of the Iceberg, it’s perhaps easy to see why.