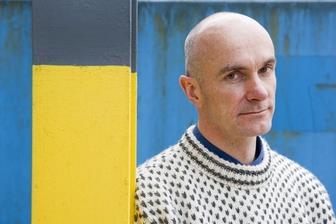 The Frisbee-loving physicist has delivered a reality check on CO2

David MacKay’s surprisingly successful book, Sustainable energy – without the hot air, has won him admirers in high places. His unflinching appraisal of the prospects of hitting the government’s 80% carbon emissions reduction target by 2050 means even the Department of Energy and Climate Change wants to talk to him.

The Cambridge don makes no bones about the size of the problem – he weighs up the potential of offshore wind farms twice the size of Wales. But his can-do attitude is what sets him apart from the nay-sayers and doom-mongers. And this is a man who leads by example: MacKay cycles to work and has halved his home gas bill by lowering the thermostat to a chilly 13C.

The jumper he wears to our meeting might suggest more of a tree-hugger than a scientist, but the professor of physics bases his arguments on figures rather than emotions. Published in December and already on its third print run, the book makes uncomfortable reading, especially for champions of renewable power. MacKay says the scale of renewables needed to match our daily energy needs is far beyond most people’s comprehension. The book suggests that nuclear power will be an important part of the mix, although he avoids endorsing one particular solution. Instead, he sets out the numbers and invites readers to make up their own minds.

MacKay wrote the book because he wanted to make the energy debate objective. “Whenever the subject came on the radio, people were yelling and getting all emotional about wanting wind farms or not wanting wind farms, or being pro- or anti-nuclear,” he says. “I wanted to help people to have constructive conversations.” It has put him in the public eye, with plaudits across the spectrum, from Friends of the Earth to the former chairman of Royal Dutch Shell, Lord Oxburgh, who called it “a valuable contribution to the continuing discussion of energy policy”.

It has also attracted the attention of the Department of Energy and Climate Change. MacKay has had three meetings with officials, including Moira Wallace, the permanent secretary, with another due.

When we meet at his 1960s department building, he is personable but businesslike. He makes it a precondition of our interview that I read his book and keeps the conversation fixed on its contents. This is not a marketing ploy – the book can be downloaded free at www.withouthotair.com – but MacKay wants to focus on the issues, not personalities. He says of his meetings with the DECC that “we’ve had some very good conversations”, but he complains that policymakers don’t grasp the limitations of renewable energy.

“Many civil servants and most politicians come from economics and law backgrounds, so they have the same understanding of these things as the man in the street, and there’s a lot of wishful thinking, or opinions that are just based on emotion. They completely ignore what the limits of the physics are.”

MacKay’s book starts by calculating our energy consumption, which he puts at about 125kWh per person per day in Britain and the rest of Europe. He uses kilowatts per person per day as his measurement to make the numbers meaningful to all. He examines the various forms of renewable energy one by one, adding up how much each could contribute towards our daily needs. A significant factor, he says, is that renewables need a lot of space because the energy from the wind, sun and waves is diffuse. By his calculations, offshore wind farms covering an area twice the size of Wales would be needed to get 50kWh per person of the daily requirement of 125kW.

MacKay says the laws of physics mean that wave, solar and wind energy will never be much more powerful than they are today, regardless of technical advances. Thus, onshore wind power will be forever limited to about 2W/m2 while solar panels will be confined to no more than 20W/m2.

He debunks the myth that a few solar panels in the desert could provide enough energy to power the world. A solar farm with twice the surface area of Germany would be needed to power Northern Europe alone, MacKay estimates. It may be physically possible, but the economic and political obstacles would be enormous.

There’s a lot of wishful thinking, or opinions that are just based on emotion. They completely ignore what the limits of the physics are.

So with renewables offering only limited capacity to replace fossil fuels, the policymakers and the public have tough decisions to make to hit the target of an 80% cut in carbon emissions. What has to come first, MacKay says, is a 40% reduction in our daily energy consumption.

The 42-year-old professor is not a pessimist, and the book makes clear that where there’s a will, there’s a way. His positivity may stem, in part, from the sunny days he spent studying for his PhD at California Institute of Technology, where he says he discovered that he cared about green politics. Back in Cambridge, he rediscovered something of the California lifestyle by joining the university Frisbee team. He was happy, though, to leave behind Los Angeles’ love affair with the car.

Transport is a pivotal part of MacKay’s proposals to cut energy consumption. He says that electrifying all transport would be four times more energy-efficient and could be achieved using renewables. He also wants all buildings to be retrofitted with substantial insulation and oil and gas heating systems replaced with electric heat pumps. MacKay is sceptical of combined heat and power, saying it is only 10-12% more efficient than standard power generation, and believes biomass is only practical near farms and forests.

Having achieved the 40% cut in consumption, Britain would need to adopt one of five energy plans set out by MacKay. All involve a mind-boggling expansion of renewables and most contain a large element of nuclear power.

Each assumes 2.5m2 of solar hot water panels on every house, 18% of agricultural land given over to biofuel production and the expansion of waste-to-energy plants so that all non-recyclables are incinerated. MacKay’s “Plan D” would also require a

30-fold increase in wind farm capacity, 6m2 of photovoltaic panels per person, wave energy devices occupying 830km of Atlantic coastline, the retrofitting of carbon capture devices at existing coal power stations and the building of a further 18GW of coal-fired stations, together with a 400% expansion of nuclear power.

Opponents of nuclear energy or coal-fired power stations may prefer Plan G, which proposes a 120-fold expansion of wind power in Britain plus imports of solar power from deserts overseas. MacKay’s three other plans are no less demanding, yet he insists these are the choices we face if we are serious about eschewing fossil fuels.

“Feel free to make another plan that is more to your liking. But make sure it adds up,” he says. “We spend about £80 billion a year on energy in Britain. If we were to spend just £2 billion a year on research and development of renewables, a lot of good things would start to happen.”