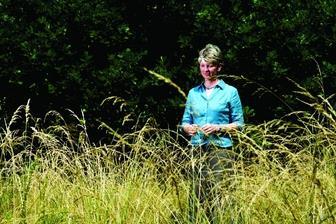 Any practice that claims to take sustainability seriously must put its money where its mouth is. That’s the belief of architect and passionate environmentalist Lucy Pedler, the director and founder of the Green Register.

The independent, self-funded organisation has an online list of construction professionals who have “demonstrated their commitment” to sustainability and runs courses to promote sustainable building practices across disciplines.

Construction firms looking to join must prove their dedication to sustainability by sending a representative to attend a two-day course.

“We can’t measure a company’s competency or passion for sustainability,” Pedler says, “but I firmly believe that someone who is willing to take two days out of their work isn’t just a bandwagon jumper.”

Ten years ago, sustainability was almost a dirty word, she recalls. “You were put in the brown rice and lentils bracket, it was terribly isolating. I wanted to create a network of professionals, a support group, where like-minded people could share ideas, find new firms to work with and feel motivated to continue their good work.”

Pedler has 25 years of experience in the built environment, and is a passionate advocate for a greener way of living. She pinpoints her decision to get into architecture to a crisis of choice in her childhood.

Her school demanded that its pupils choose between arts and science by the tender age of 13. With her parents, both doctors, entrenched in the latter camp, she not surprisingly chose science. At 16 she “realised there was another side to life” in the form of art, and felt that architecture could be the perfect way to draw from both academic interests.

“I decided to become an architect when I visited the Palace of Knossos on the island of Crete,” smiles Pedler. “I was with my mother and I found myself looking at this beautiful ruin. I started rebuilding it in my mind. I was inspired.”

She took a year out before beginning her architectural training at Plymouth School of Architecture in 1978. There she met her future husband, Paul McWilliams, who was on a student exchange programme from Mississippi State University. She finished her training in 1984 and moved to Mississippi with him. The couple lived in Boston for a few years before moving back to London in 1995.

Pedler left architecture for a time because the hours were “incompatible with having children”. When her two daughters were a little older, she went to work as a product specialist at Construction Resources, the UK’s first ecological building centre, where she stayed for five years. Pedler says that she was effectively being paid to learn. “It was a fantastic job, which combined my passion for architecture and my passion for environmentalism.”

She spent the first two years there researching the environmental impact of ecologically sound building materials and systems, and three years advising architects and other professionals on the appropriate selection of building materials.

Pedler says she was fortunate that the professionals she addressed were sustainability friendly, though she did come across some scepticism.

“Ten years ago sustainability wasn’t what it is now. Most of the people I met were already on board with the concept, but outreach meetings brought a fair few sceptics. They poured a fair amount of scorn. Thankfully there are even fewer of these types around today; there’s no room for them any more.”

Pedler believes in looking at buildings as a whole and says that, thanks to the Building Regulations, architects and engineers now have to engage with each other from the beginning of any given project.

“Time was an architect would draw plans, hand the design to the engineer and tell them to make it work. Truly sustainable building projects can’t rely on bolting things on at the end. Integration is essential. I’m desperately trying to avoid using the word holistic, but there it is.”

Pedler started her own sustainable architecture practice, Archipeleco, in Bristol in 1999. She says the idea of working for herself, and the feeling that her daughters were old enough for her to go back into practice, made a return to architecture more appealing.

“I did not want to work for anybody else again. I would be an impossible person to employ now,” she admits.

I had hoped that the recession would be more catastrophic, that it would change the way people think about their lives – because we can’t keep consuming the way we do

The idea for the Green Register emerged from her experience of leading seminars at Construction Resources.

“There were plenty of people passionate about sustainability, but they just couldn’t find the professionals who could deliver it. Setting up the Green Register was the way to pool together companies who could,” Pedler says.

The Green Register holds the two-day introductory sustainable building and services course about eight times a year at locations across the country, and also visits companies to provide CPD sessions, workshops and events inhouse.

The organisation has taken a hit because of the recession, as company training budgets are being slashed. “The impact has been pretty significant, we have seen a noticeable drop in certain courses,” Pedler says.

“Green refurbishment, on the other hand, is quite topical at the moment. That course was fully booked. Slashing budgets is such a shortsighted thing to do. The regulations aren’t going anywhere.”

When the conversation turns to the economic downturn, Pedler makes a seemingly startling admission: she wishes it had been worse.

“I know that’s an odd thing to admit but I had hoped the recession would be more catastrophic – that it would change the way people think about their lives, because we can’t keep consuming the way we do. Frankly, we’re running out of stuff.”

Pedler is fearful that the world is not catching on fast enough to sustainability. “We can’t just consume our way to greener living. The old economic model is fundamentally flawed.

“We just don’t seem to learn, and our experts tell us to consume and things will improve – although I will say that if this had happened 10 years ago, the green agenda would have been lost. Sustainability just wasn’t bedded in enough. I do worry that people won’t be persuaded to change. You may have noticed that I feel very cynical at the moment.”

Pedler believes that one sure-fire way to reduce fuel consumption, and lower emissions would be to increase fuel prices tenfold. “The problem is that there’s no one thing that’s crystallising the issue of energy efficiency. If you were to increase energy prices that dramatically you would definitely see a change in the approach to energy consumption.”

With allowances for those in fuel poverty, Pedler believes that such a huge increase in fuel costs would lead to much more creative thinking and improved levels of energy efficiency.

“There are some problems with this idea, of course,” she concedes, “such as in rural areas, where people and businesses are more dependent on cars. But something radical has to happen to snap people out of this pattern of consumption.”

The Green Register now has more than 500 members. With slumps in the numbers attending certain courses and full bookings for others, the future is uncertain, but Pedler remains upbeat.

“I’m not an economist,” she laughs, “I have no idea when to expect things to pick up. Twenty-five years ago I had never heard of the term sustainability but now it’s embedded in the industry.

“The Green Register is cross-disciplinary, because we can’t work in silos any more. That’s not going to change any time soon. Built environment professionals just have to capture the public’s imagination better, so we don’t run out of stuff after all.”