The latest figures from the Office for National Statistics show that total construction output hit its highest year-on-year level since 2008. Experian Economics reports

The latest figures from the Office for National Statistics indicated total output in construction stood at £123.73bn in 2014, after increasing 9% year-on-year to its highest level since 2008. The upturn was apparent in the first three months of 2015 as activity reached £31.42bn, after increasing 4% on the same three months a year earlier. On a four-quarter moving basis output has been ticking upwards since Q3 of 2013.

The second estimate of UK GDP from the ONS was unrevised from the first, confirming growth of 0.3% quarter-on-quarter in the first three months of this year, down from 0.6% on the same three months of 2014. The main drag was due to a deterioration in the UK’s net trade position, which offset a strong performance from the domestic economy. The figures demonstrate the unbalanced nature of the UK recovery with the low inflation and interest rate backdrop supporting consumer and business spending. In contrast, lacklustre growth in key European markets and the strength of the sterling relative to the euro has taken a toll on exports. This is noticeable by the Eurozone’s share of export demand falling from 52% to 45%.

The majority of new work sectors experienced an increase in activity in 2014. The public and private housing sectors saw the sharpest gains on an annual basis. The former was up 28% to £5.69bn, which was its highest level on our current data series (1997).

The latter grew 25% to £21.5bn. The industrial sector was not far behind as output rose 22% year-on-year to £3.8bn, which was its highest post-recession level. Consumer demand remains a positive driver to industrial activity in the short term, with low inflation coupled with increasing real wages fuelling demand for consumer goods. This has been reflected by an increased requirement for distribution facilities as online retailers in particular look to capitalise on this, although the upswing has been more apparent for the warehouses subsector.

The commercial sector saw a more modest 4% increase to £22.98bn on 2011 prices. It was previously reported as static compared with 2013. This change in performance in real terms has been due to a revision of the output price indicator for the sector, which now indicates an inflation rate for commercial construction of 4.3% in 2014 rather than the 7.8% previously stated. In current prices output has only been revised marginally from 9% growth to 9.5%. Finally, infrastructure activity flattened out last year, although it remains at a notably high level.

Performance was slightly more mixed in the first three months of this year. Only the industrial and infrastructure sectors experienced growth on an annual and quarterly basis. The former was up 2% and 14% respectively to reach £992m. The latter increased by 9% and 16% on the same measures to total £3.8bn, as work on a number of medium-sized projects in the rail, gas and electricity subsectors got underway. Private housing was the only other sector that saw growth in the first three months of this year, coming off the back of low interest rates, rises in real wages and government incentives.

Public housing saw the sharpest decline in Q1 of this year, following on from a collapse in the level of new orders. The sector has performed well recently but debt obligations for social housing providers may be constraining investment. This comes alongside low levels of publicly available funding. The public non-residential and commercial sectors also exhibited weakness in terms of Q1 activity growth.

Total new work orders stood at £48.6bn in 2014 after increasing for the third successive year. They had also risen in the first three quarters of 2015, albeit only on an annual basis, standing at £12.42bn. The industrial and commercial sectors made the largest gains on these measures. In contrast, the public and private housing ones saw the sharpest falls. 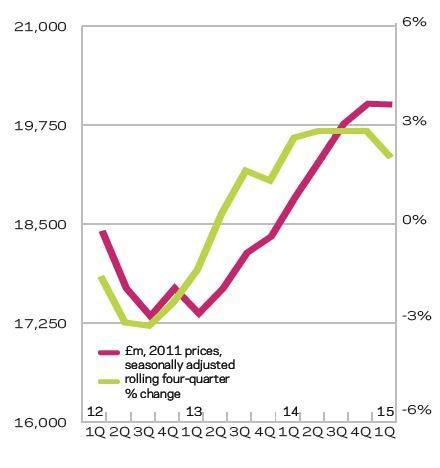 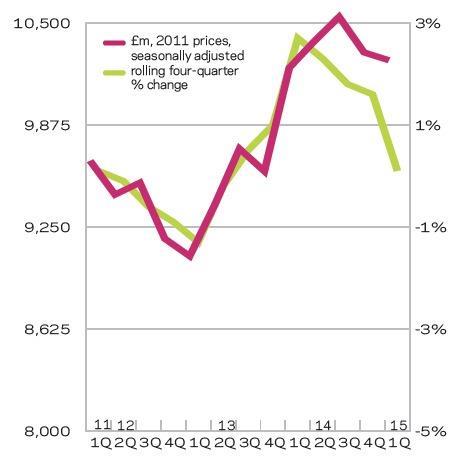 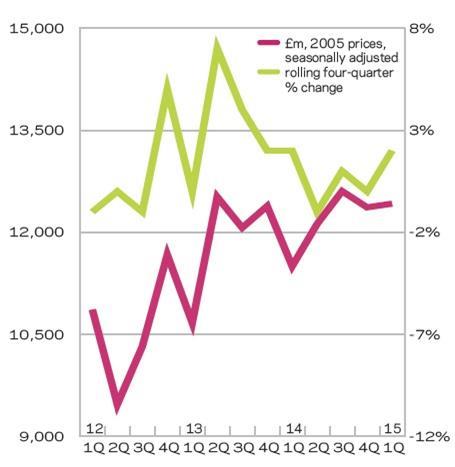 We predict that the majority of work sectors will post growth on an annual average basis over the forecast period. The exception is public housing activity, which given the state of new orders is not expected to return to growth until 2017 at the earliest. 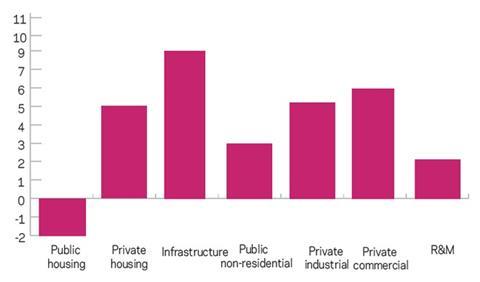 Output in the first quarter of this year increased in five out of 11 regions and devolved nations, when compared with the same period a year earlier.

Repair and maintenance (R&M) output also grew in five out of 11 regions and devolved nations, over the same measures. Greater London and the South-east saw the sharpest increases in percentage terms.

Only four out of 11 regions and devolved nations saw their orders increase on an annual basis in the first quarter of the year.