The downturn sent most graphs south in the second quarter of the year, but a closer look at the data shows wide variations between regions and sectors, according to Experian Business Strategies

Economic conditions have deteriorated rapidly over the past few months, and a recession is now inevitable. Credit conditions are constrained and developers are postponing some projects in light of the uncertainty.

Despite the gloomy economic climate, the latest data from the Office for National Statistics shows that construction output expanded again in the second quarter of this year, even after accounting for inflation. Total output was £21bn in 2000 prices – 3% higher than in the first quarter of 2007. Although overall construction output continued to increase, there were marked variations between sectors.

Industrial construction output has also been affected by the slowdown. Manufacturers are suffering and cutting back on capital expenditure.

In contrast, the new-build public non-residential sector’s output jumped 12% year-on-year in the second quarter, to £1.9bn, in 2000 prices. This buoyancy was mainly caused by the beginning of the Olympics build programme. Enabling works for the stadium started three months ahead of schedule in May and work has also begun on the aquatics centre and the Olympic village.

Private housing R&M was unexpectedly strong. Output rose 8% year-on-year in the second quarter, to £3.3bn in 2000

prices, the strongest quarterly outturn for 19 years. One explanation is that, with the credit crunch making it difficult to obtain mortgages, those considering moving up the property ladder have decided to renovate and extend rather than move house. Falling house prices are also making this a more attractive option. 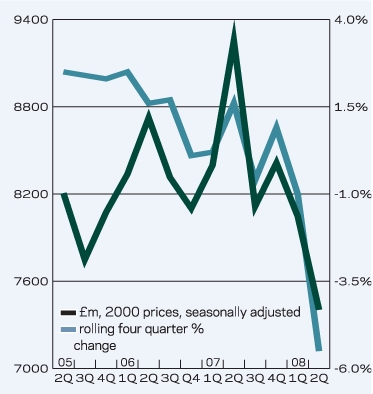 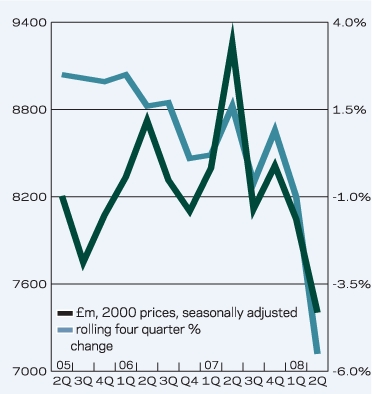 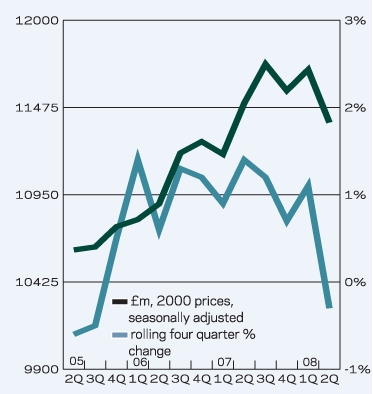 The chart (attached) presents Experian Business Strategies’ latest regional forecast for 2008 to 2010. Construction output is forecast to be higher in 2010 than 2007 in all regions, although output in some regions may contract once inflation has been taken into account. The South-west is expected to grow by just 2%, thanks to the large share of private housing in total output. By contrast, the West Midlands and the North-east are forecast to show double-digit expansion. Work on schools is expected to be the main contributor to growth in both regions, and the West Midlands will also benefit from the £400m renewal of Birmingham New Street station.

There was a mixed peformance from the regions in the second quarter (see graphic attached). Yorkshire was the worst hit, as output in 2Q08 fell 14% compared with the second quarter of last year. East Midlands and East Anglia also contracted. The North-east, on the other hand, continued to show robust growth (10%). Output rose strongly in Berkshire, the South-east, London and Kent.

Growth in R&M output was recorded across all regions in the second quarter, although at varying rates (see graphic attached). The greatest rise was in the North-west (21% year-on-year), taking it to £1.4bn in current prices. East Anglia, Yorkshire and the South-east also recorded double-digit growth. In contrast, R&M output in London was only 2% higher than in the same period in the previous year.

Only East Anglia (11%), Bedfordshire (8%) and South (5%) recorded any growth in new work in the second quarter of 2008, compared with the previous year (see graphic attached). Orders plummeted 51% in Yorkshire and Humberside to just £734m in current prices, closely followed by a 49% drop in the West, where new orders in the second quarter were worth just £253m.