Data from Experian Economics shows that construction output in Q2 saw a slight improvement, but new work orders have soared by 20% and public housing is looking strong

Construction output in the second quarter of this year edged up by 1% quarter-on-quarter to £23.9bn (constant 2005 prices), although the total remained 3% below the corresponding figure for 2012.
Public housing activity picked up notably with annual and quarterly increases of 4% and 8% respectively. Public non-residential and commercial construction both fell sharply on an annual basis, the former by 15% and the latter by 8%.

UK GDP was estimated to have grown by 0.7% quarter-on-quarter in the three months to June this year. During this period the wholesale and retail sector saw the largest upturn (1.4%), closely followed by mining and quarrying (1.3%). Upticks were also seen in manufacturing (0.7%) and professional and other private services (0.9%). Conversely, the sharpest decline was in the finance and insurance sector, with activity falling by 1% from the previous three months.

Growth was recorded in the majority of new work sectors in the second quarter of this year. The stand-out performer was public housing, with activity increasing by 8% quarterly to £941m, the highest quarterly total since the first three months of 2012. Infrastructure construction followed with a 3% upturn, to £2.9bn.

Upticks were also seen in the private housing (1%) and public non-residential (1%) sectors, to £3.3bn and £2.1bn respectively.

Particularly strong growth was observed in public housing (£969m), infrastructure (£2.7bn) and industrial (£654m) construction at 31%, 75% and 21% respectively. Double-digit growth was also recorded across private housing and commercial construction. Public non-residential construction was the only new work sector to see a fall in orders, with a 5% contraction to £2.1bn. 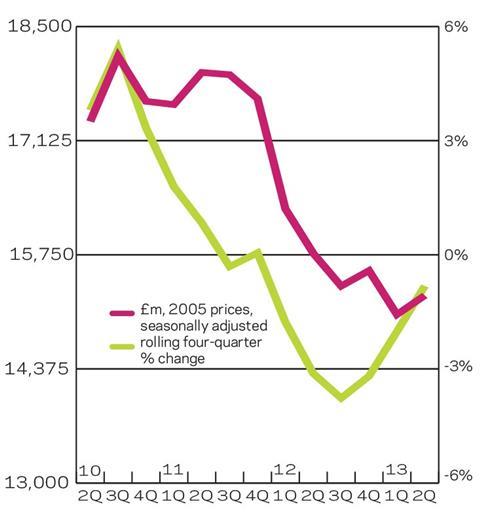 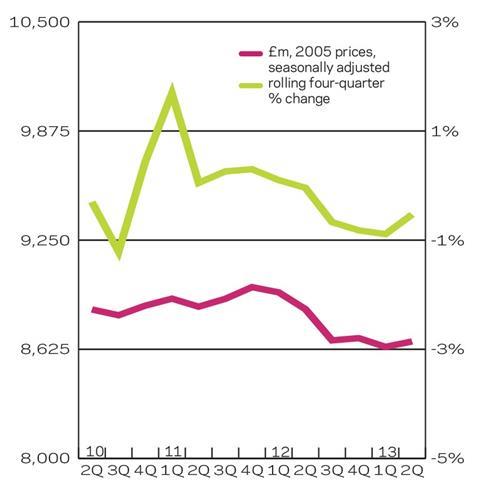 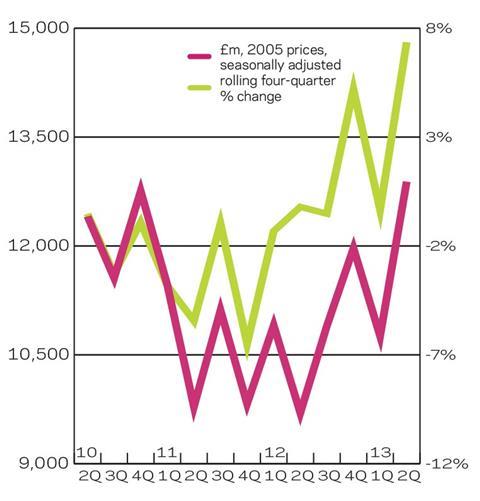 The chart (above) highlights sectoral forecasts for 2013-2015. We expect public non-residential construction activity to remain depressed through the aforementioned period, with an annual average contraction of 10%. Public housing and private commercial construction are also set to decline, with falls of 2% and 4% respectively. Activity should pick up in the remaining new work sectors with notable upticks in infrastructure (9%), private industrial (8%) and private housing (7%) construction. The latter is currently being bolstered by schemes such Help to Buy, which is set to continue into 2014.

Regional new work performance has improved in six out of 11 regions and devolved nations in the second quarter of this year when compared to corresponding period of 2012. The stand-out regions were Scotland (16%), the North-west (14%) and East (12%), which all saw double-digits increases. In contrast, five out of the 11 regions saw a drop in activity, with Yorkshire and Humberside (5%), London (4%) and the South-east (4%) experiencing the sharpest declines.

The repair and maintenance sector experienced growth in eight out of 11 regions and devolved nations. Wales (19%), the West Midlands (19%) and the East (13%) all increased at a double-digit rate on an annual basis. However, sharp declines were recorded in London (11%) and the East Midlands (9%).

New work orders remained volatile in the second quarter of this year. Orders in the North-east better than doubled the corresponding total for 2012, while Yorkshire and Humberside (68%), the East Midlands (100%) and the North-west (73%) all rose significantly. Conversely, new orders in the West Midlands fell by 24% year-on-year while the East and South-east saw moderate declines.