Total construction output grew more than previously thought in 2015, according to the latest figures from the Office for National Statistics. But while the first quarter of 2016 saw growth over the same period last year, the second quarter’s output has been static

Meanwhile, activity in the first quarter of this year rose by 0.8% on a quarter-on-quarter basis, but it was largely static in the second quarter at £33.87bn. Annualised output was 1.9% higher in Q2 compared with a year ago.

The figures suggest that the UK economy remained in good health in the run up to the EU referendum on 23 June.

Beyond Q2, however, output is expected to moderate.

Looking at construction, the repair and maintenance sectors performed better than the new work sectors in the second quarter, posting growth of 0.7% compared with a decline of 0.6%.

Growth in the new work sectors was centred on non-residential building, with housing activity suffering a hiatus. Private housing output in Q2 was down marginally to £6.57bn.

Annualised growth remains robust, however, and expectations are that the sector will continue to expand throughout the current forecast period (2016-2018), albeit at a slower rate.

In contrast, public housing output fell by more than 4% quarter-on-quarter in Q2 and the annualised trend remains heavily downwards. The current political environment remains unconducive for any pick-up in the sector over the forecast period, although there have been increasing calls, even from some on the government back benches, for more funding for genuinely affordable housing.

Of the non-residential building sectors, the industrial sector was the most buoyant in Q2, posting output growth of nearly 7% quarter-on-quarter and pushing back over the £1bn mark, which it had dropped below in the first quarter.

Public non-residential output increased by 3% quarter-on-quarter in Q2 to £2.47bn, with increases across the board in the sub-sectors. Output is expected to grow modestly over the forecast period, driven largely by activity in the education sector.

Commercial was the weakest of the non-residential building sectors in Q2, with output largely static at £6.26bn. This sector is most reliant on overseas investment and so could be hardest hit by any retrenchment.

The capital’s office development cycle had probably already peaked, so the referendum result is likely to sharpen the downturn. The regional markets, however, are somewhat more insulated from this effect and, given a shortage of Grade A space in many, the prospects for new-build remain good.

Infrastructure output came off the boil slightly in the second three months of the year. At £4.52bn, however, output remained at a high level.

While activity is expected to decline from its peak in 2015, there are still some big projects in the pipeline, such as the Thames Tideway and HS2, to replace those on which work is winding down, such as Crossrail. 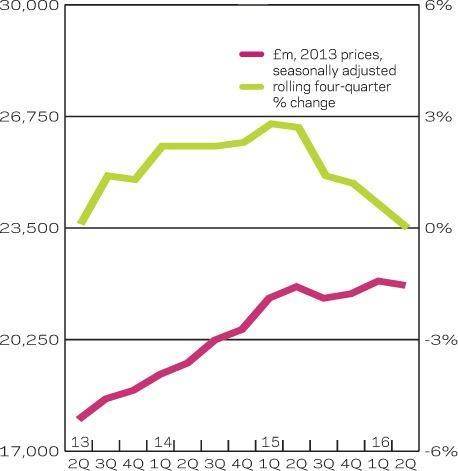 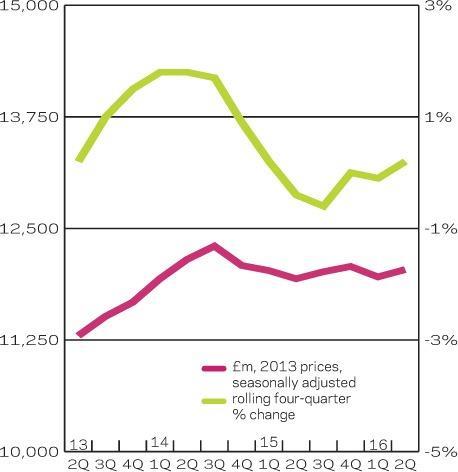 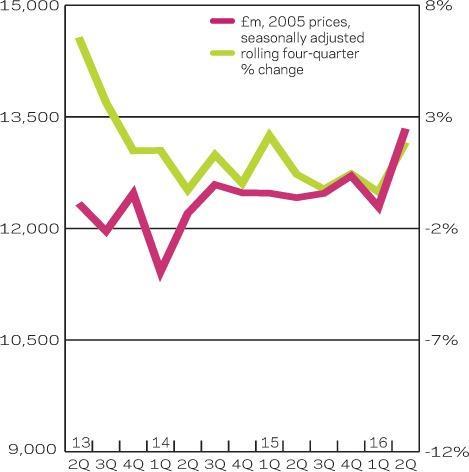 Economic growth is likely to be slower than would otherwise have been the case, given the result of the EU referendum. This will inevitably affect construction activity, particularly on the private side, with declines in total output projected for this year and next. The falls are, however, expected to be modest, with the industry returning to growth in 2018.

On a current price basis, new work increased in all regions in the second quarter of 2016, with the strongest growth in the West Midlands (14% quarter-on-quarter), the South-west (12%) and Wales (10%).

The performance of the repair & maintenance sector across the regions was much more variable than new work, with four regions experiencing rises and seven seeing falls. The overall figures were boosted by a 36% increase in Yorkshire & the Humber.

New orders in the regions on a quarterly basis can be quite volatile, and Q2 2016 was no exception. Six of 11 regions posted rises, some of them strong, such as a 67% quarter-on-quarter increase in the West Midlands. In contrast, the level fell by 48% in Wales.