According to the latest from the Office for National Statistics (ONS), the second estimate of GDP for the second quarter of 2017 was unrevised from the first, confirming that growth edged up to 0.3% quarter-on-quarter, from 0.2% in the first quarter of 2017. The service sector largely drove growth.

The outlook for the UK economy over the next two years has weakened significantly since the Brexit vote. Uncertainties, notably on the domestic front, have mounted. Inflation threatens to erode real income growth and curb consumer spending, while capital spending is set to weaken further as political and economic turmoil persists. There is likely to be some gain from the more competitive exchange rate, but, with global demand remaining weak, we expect this to be heavily outweighed by the fall in domestic demand, despite looser monetary and fiscal stances.

Between April and June 2017 total construction output rose by 0.4% to £34.6bn (in current prices) compared with the same period in 2016. Among the new work sectors, the public housing market experienced the strongest year-on-year growth of 14% to £1.2bn. Public housing output is expected to grow by a more modest annual average of 1% over the next three years, however, as a result of local authority budget constraints, uncertainties revolving around Brexit and the recent election results, and weak new orders growth in the first quarter of 2017. But the recent white paper has announced government plans to focus on encouraging council housebuilding. New orders also recovered a little in the second quarter. As a result, output is forecast to recover slightly in 2018 and 2019.

Over the same period, the private housing sector posted a 4% expansion to £7.03bn, making it the largest new work sector for the sixth consecutive quarter. Despite aspirational targets such as 270,000 new homes a year by 2020, all evidence suggests more moderate growth in private housing output over the period. House price growth should average 2.2% per year from 2017 to 2019, while property transactions and new orders growth remain rather subdued. Moderate growth has been predicted for private housing output over the next three years. The housing affordability issue and muted consumer confidence will still drag the sector. But government initiatives to provide more grants for private rented sector deals, and the Help to Buy scheme, offer a possible upside impetus to the forecasts.

In the second quarter of 2017, infrastructure output rose by 3% to £4.5bn against the same period a year earlier. Activity should stabilise this year before moderate expansion in 2018. Double-digit output growth is expected by 2019.

The public non-residential sector saw a year-on-year contraction of 7% to £2.33bn. Output growth in the sector is expected to stagnate over the medium term, with downward pressure from falling capital spending on health and schools to 2020 counterbalanced by long-term university expansion plans, such as the University of Glasgow’s £1bn scheme. Defence-related works on the Ministry of Defence’s Army Basing Plan are also expected to mitigate declines in output in other sub-sectors.

Industrial output still declined in year-on-year terms, with the biggest fall of 22% in the three months to June, despite a slight quarter-on-quarter rise to £804m in constant prices. Jaguar Land Rover’s £500m development is the only large-scale project in the pipeline.

The commercial market posted another year-on-year rise to £6.76bn in the three months to June, albeit at a modest 2% and a slight contraction in quarter-on-quarter terms. Annual growth in the sector should average 0% over the period, with moderate expansion expected for this year, followed by declines in 2018-19. The main reason for this is the uncertainty from recent events and the caution by investors and developers to bringing new projects forward. The impact of the investment slowdown will be felt most keenly in the offices sub-sector. 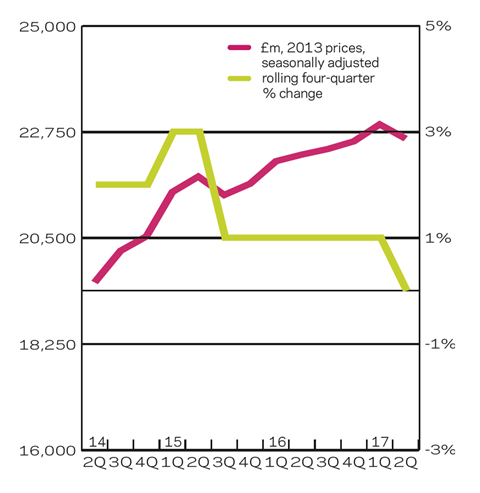 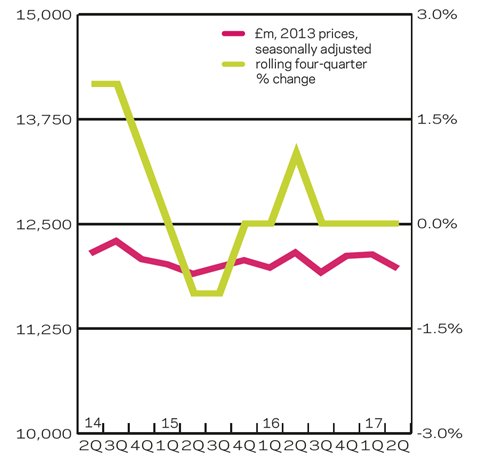 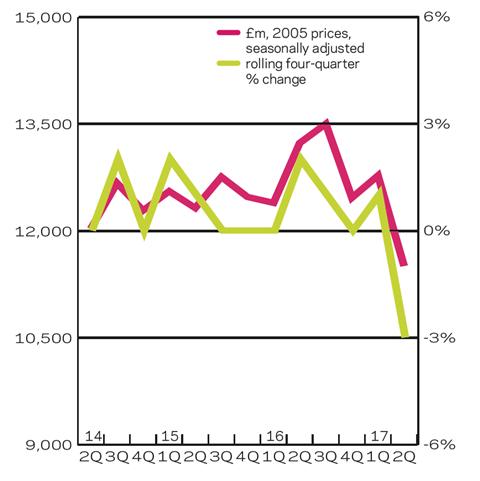 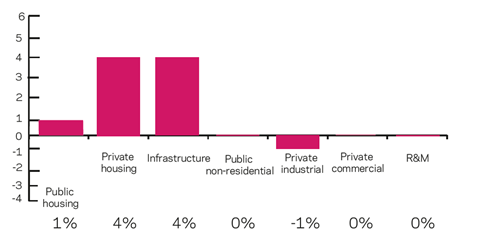 In the three months to June 2017, new work output (in current prices) increased in eight out of 11 regions and devolved nations on an annual basis.

Output for the repair and maintenance sector (R&M) increased in six out of 11 regions and devolved nations on the same measure.

New work orders increased in six out of 11 regions on a yearly basis in the second quarter of 2017. The North-east experienced the biggest absolute rise in orders as they went from £583m to £875m.