Construction output in the second quarter of 2018 rose by 1% compared with last year, but most sectors seem to be feeling the growing uncertainty around Brexit

Between April and June 2018 total construction output rose by 1% to £40.87bn (in 2016 prices) compared with the same period in 2017. The public housing market contributed to this with a 3% rise to £1.6bn over the same period. The sector is expected to grow by 3% a year over the next three years. While recent plans to encourage council housebuilding will boost output, the fall in business investment triggered by the uncertainties around Brexit will affect social housing providers’ ability to raise finance. We expect no change in 2018, with moderate recovery in 2019 and 2020.

The private housing sector posted the second strongest year-on-year growth (after the industrial sector), rising 6% to £8.84bn. The sector is expected to continue growing, albeit at a slower rate of 3% per annum. Given the uncertainty ahead, output growth will see some softening. Meanwhile, affordability issues and uncertainty continue to dampen demand, and we expect a slowdown in 2018 from the double-digit rises seen over the past five years, picking up only slightly by 2020.

Infrastructure output rose 5% to £5.14bn in the second quarter of 2018, compared with the same period a year earlier. The sector is still expected to experience the strongest annual average growth out of all sectors at 6%. Fairly flat growth over 2018 is expected to give way to stronger growth in the second half of the forecast period. The electricity sub-sector is expected to be a key determinant of this. While the Hinkley Point C nuclear power station is failing to offset decreases in other generation types this year, it should provide a more substantial boost over the subsequent two years. Gradually increasing output is also forecast for the roads sub-sector, despite a tempering of the 2020 forecast to reflect doubts Highways England can deliver its plans on time. For rail, double-digit growth is forecast for 2018, as increased HS2 activity offsets declining Crossrail expenditure.

The public non-residential sector experienced the largest year-on-year contraction of all new work sectors, falling 19% to £2.23bn in the second quarter of 2018. Output is expected to continue declining, averaging 4% per annum. This is largely due to expected declines in the schools and health subsectors, as well as offices. A few large university projects are likely to be the main sources of growth.

The industrial sector continued to recover in the latest quarter, with output rising by 18% compared with the same period of 2017, to £1.35bn. More modest annual average growth of 1% is currently expected, pushed down by the factories sub-sector

and up by a buoyant forecast for warehouses. Should work commence on Bentley Motor’s £800m extension of its Crewe headquarters or Jaguar Land Rover’s Coventry factory, output could grow faster. The rise of online retailers could also lead to a greater need for new distribution facilities, as could the need for more storage space for stock if more stringent customs checks are introduced post-Brexit.

The commercial sector experienced a second consecutive period of decline, with a year-on-year contraction of 4% to £7.52bn in the three months to June 2018. The sector is expected to experience the largest annual average contraction of 5% over the forecast period. The offices sub-sector is expected to be the hardest hit by the uncertainty around Brexit – heavy declines in output are expected, hopefully improving as the situation becomes clearer. 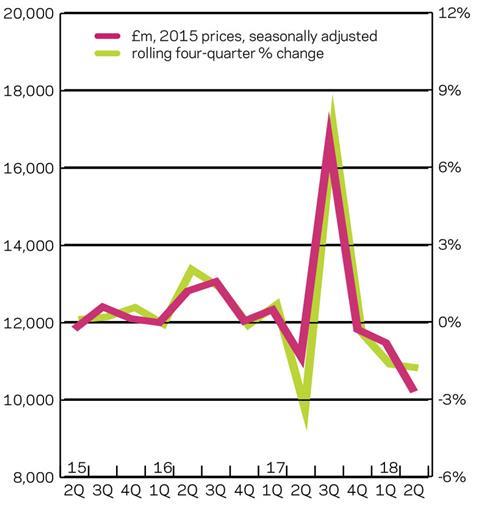 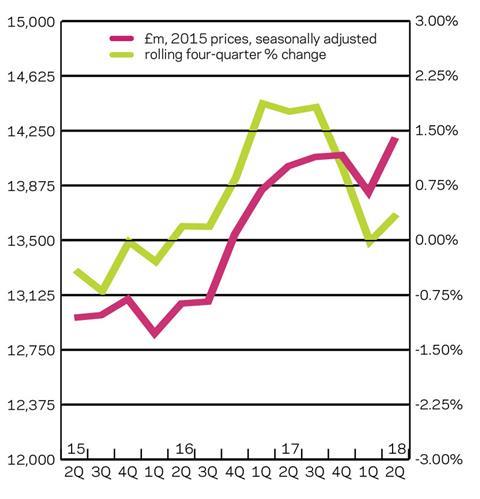 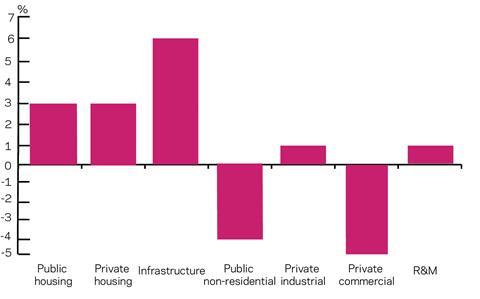 In the three months to June 2018, new work output in current prices increased in eight out of 11 regions and devolved nations on an annual basis.

Output for the repair and maintenance sector also increased in eight out of 11 regions and devolved nations on the same measure.

New work orders increased in four out of 11 regions on a yearly basis in the second quarter of 2018. The East Midlands experienced the biggest absolute rise in orders, with an increase of £441m to £1.25bn. This is largely due to a relatively low order figure in the second quarter of 2017, especially in the infrastructure sector. Although the imminent start of works on the Triton Knoll offshore wind project and HS2 are the most likely sources of recovering infrastructure orders over this period.