New orders for the third quarter of last year fell 18% – just a flavour of the gloom to come, you might think. But actually, it’s not all bad news. Experian’s Business Strategies division sees mixed prospects

Despite all the gloom from the construction sector in recent months, the latest data from the Office for National Statistics (ONS) suggests that construction output in the third quarter last year was 2% higher than a year ago. Even so, much worse is to come for the industry if the new orders figure is anything to go by – it fell 18% year-on-year in the third quarter.

There were huge sectoral variations in output. The public non-residential sector remained buoyant, with output increasing 26% compared with the same period a year ago. Delayed Building Schools for the Future projects have been coming on line throughout most of the year so far and work on the Olympic venues is well under way.

Infrastructure growth was similarly strong, with output rising 19% year-on-year in the nine months to September. Construction on the Thameslink upgrade is under way and the M1 improvement programme has been continuing.

The private housing and industrial sectors have been the worst affected by weakening economic conditions. The fall in house prices, along with tighter credit conditions and rapidly increasing uncertainty regarding household incomes and job security, has contributed to stagnating demand in the private housing sector. Under such uncertain conditions housebuilders are retrenching and developments are being mothballed. The outturn for private housing in the third quarter of 2008 was the weakest since the third quarter of 2002, and the prospects for the sector are gloomy. New orders in the nine months to September 2008 were 39% below the same period in 2007.

Repair and maintenance (R&M) has held up surprisingly well. Consumer spending has not been knocked as badly as expected, and there has been little evidence of households cutting back dramatically on R&M expenditure. Total output in the first three quarters rose 5% year-on-year, and there was a 4% increase in public and private housing R&M.

Expenditure on R&M, both public and private, is likely to be scaled back over the coming months, as non-essential spending will be carefully scrutinised and refurbishment programmes may be delayed.

The commercial sector has so far continued to perform solidly, with output in the first three quarters of the year totalling £12.6bn, 2% more than in the same period of 2007. This is unexpected considering the sector’s particular exposure to the turmoil in the financial markets and the uncertainty for retailers.

ONS data for 2008 so far suggests that the construction industry has, overall, not been as badly affected by the economic downturn as had been expected, even considering the weak performances from some sectors. 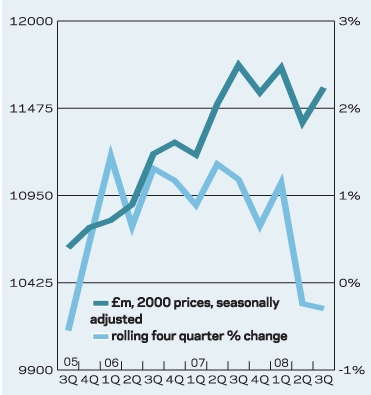 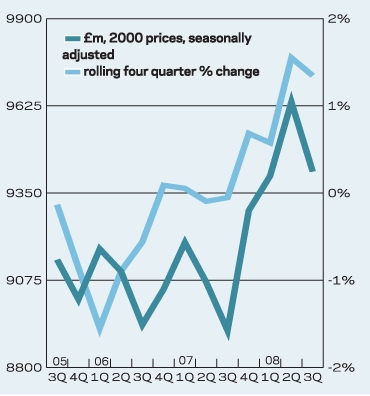 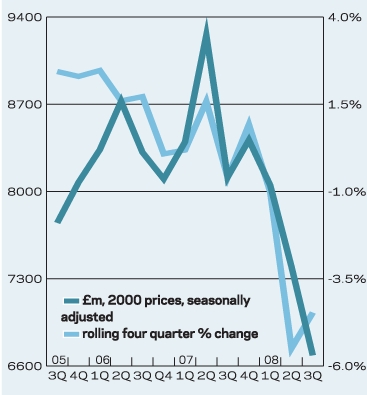 The chart (right) presents sectoral forecasts for 2009-11. Strong performances are expected from the infrastructure, public housing and public

non-residential sectors, but these do not cancel out the sharp declines in output in the remaining sectors. Infrastructure, is expected to perform especially well, with output rising 40% over the three-year period. In contrast, private commercial construction output is forecast to be 20% lower

in 2011 than it was in 2008, as the office and retail sectors fare especially badly during the downturn. Overall, construction output expected to decline by 2%.

Regional performances continued to vary in the third quarter, although there was a further decline in output, year-on-year. The exceptions were the South, London, BRK (Berkshire, Buckinghamshire, Hampshire and Oxfordshire), the South-east and the North-east. The strongest rate of growth was in London ( 8%) and BRK (7%). It was down 18% in Yorkshire and 16% in the East Midlands.

R&M output held up in the third quarter. The strongest performance came from the North-east, where output rose 29%, albeit from a relatively small base, and London where output rose 26% compared with the third quarter last year. The North-west and the West Midlands also showed R&M output growth of more than 20%. The weakest regions were South-west and the West, where R&M output declined by almost 10%.

It was a different story for new orders, which fell in each region except for BED (Bedfordshire, Essex and Hertfordshire) and BRK. The increase in BRK was 1%, but new orders rose by 18% in BED year-on-year. There was a decline of 4% in London, but the remaining regions experienced double-digit declines. Orders fell by 42% in KNT (Kent, Surrey, Sussex) and by 40% in the West.