Construction output continued its downward trend in 3Q12, falling by 2.5% to £23.8bn. In the nine months to September 2012, a larger contraction in output of 8.5% to £73.2bn was seen when compared with the corresponding period of the preceding year.

While new work output decreased by 2.4%, from the previous quarter, the repair and maintenance (R&M) sector saw a fall of 2.7%. It is worth noting that on an annual basis the former sector has seen a much stronger drop in output (-12%) than the latter (-1.5%).

Across all new work sectors output went down with the exception of infrastructure, where it grew by 7.6% to £2.8bn during the quarter.
The commercial sector experienced the most marked decreases as output contracted by 6.9% to £5.1bn. This comes as no surprise, as weak economic performance and the resurgence of the eurozone crisis in the middle of last year led to falling business and consumer confidence. New orders for the sector saw a reasonably good first quarter of 2012 but they have fallen off alarmingly in the second and third quarters of the year.

The new orders out-turn in the third quarter of 2012, at £2.55bn in 2005 prices, was the lowest since the third quarter of 1979.
Trouble in the wider macro economy is also affecting the private housing market, and the out-turn for the sector contracted by 4.4% to £3.2bn. Recent months have seen banks offering lower rates on loans at higher loan-to-value ratios, allowing easier access to finance. However, continuing concerns over unemployment and the squeeze on incomes led to downbeat prospects over the shorter-term.

Both the public non-residential (-1.3%) and public housing (-0.2%) sectors saw relatively smaller falls in output quarter-on-quarter. However, on an annual basis, both sectors saw the largest reductions in output of 22.4% and 19.9% respectively. The halving of the Affordable Housing Programme for 2011-15 compared with 2008-11 is inevitably having an impact on the public sector, with providers expected to raise the additional funds needed to deliver their affordable housing units from private sources. The big driver of the public non-residential market over the recent years has been the Building Schools for the Future programme. However, once this was scrapped and the majority of the legacy projects started to complete, output decreased.

Following a decline of 9.2% in 2Q12, new work construction orders rose by 5.4% to £10.2bn in the three months to September 2012 when compared with the previous quarter. On a sectoral basis, infrastructure saw the greatest growth - of 31.4% to £2.5bn - although this is still 24% below the peak quarterly level experienced in 3Q09.

A rise of 13.8% was seen in the industrial sector with a similar increase in public housing (+13.7%). However, on an annual basis orders for the latter sector actually dropped by 13%. Little change was seen in the public non-residential sector (+0.3%) during the quarter whereas falls of 6.7% and 1.6% were experienced in the commercial and private housing sectors respectively. 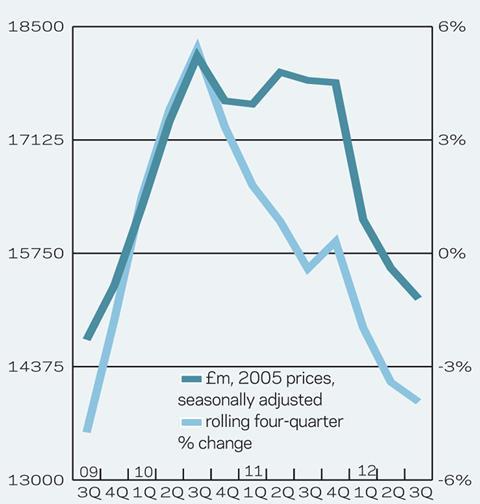 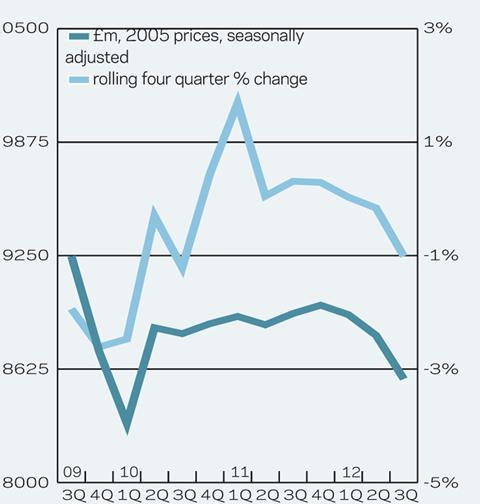 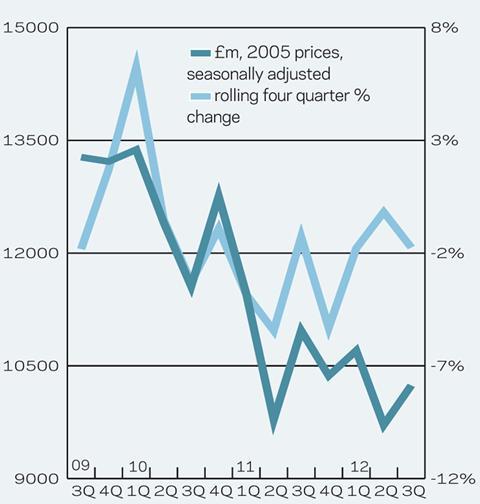 The chart (below) presents sectoral forecasts for 2013 to 2015. The public non-residential one is expected to see the heaviest falls - of 29% - and the sector is predicted to be about half its size in 2015 when compared with peak levels experienced in 2010. The infrastructure market is due to experience the strongest growth - of 28% over our forecast period. The growth markets are roads, rail, gas and electricity, while water, sewerage, air and harbours are all forecast to decline in the short term. The premise of growth continuing strongly into 2015 is dependent on work starting in 2014 on EDF’s Hinkley Point C nuclear power plant.

New work output fell across all the regions and devolved nations in 3Q12 compared with 3Q11. The weakest decline was in the North-east (-1%). In contrast, output in Scotland experienced the largest decrease, of 18.9% year-on-year. The West Midlands followed closely behind with a drop of 17.3%.