Data from Experian Economics shows that construction output in Q1 was some 23% below 2008 levels. But GDP edged up, and industrial output is looking healthy

Construction output across the UK continued to struggle in the first three months of this year; activity fell to £23.7bn (in current 2005 prices), down 6% on an annual basis and some 23% below its recent peak in early 2008. Public non-residential construction saw the largest fall in output with the total down 20% annually and 8% quarterly. Conversely industrial construction activity in the first quarter of this year edged up by 1% quarter-on-quarter.

UK GDP grew by 0.3% quarter-on-quarter in the first quarter of 2013. This was a slightly better outcome than expected, but was nevertheless a weak performance emphasising the fact that the economy has been broadly flat over the past 18 months, with GDP just 0.4% higher in Q1 2013 than in Q3 2011.

During the aforementioned period, services expanded by 1.9%, offsetting some of the large declines in construction (12%) and manufacturing (4%) output. The ONS now estimates that in Q1 2013 GDP was 2.6% below the peak in the first three months of 2008.

Output across both the public housing and public non-residential sectors continued to slide downwards in the first quarter of 2013. Activity within the former slumped to its lowest quarterly figure since the last three months of 2010 at £868m, while the latter saw its tenth successive quarterly decline to £2bn.

Both the infrastructure and commercial sectors also saw declines; with output in the first three months of this year falling to £2.8bn in the former and £5.1bn in the latter, an annual decline of 2% and 9% respectively.

Output in the industrial sector performed well in the first quarter of this year, with the total up 7% on Q1 2012, reaching £872m, its highest quarterly figure since the third quarter of 2010. Output in the sector is currently being boosted by a small number of large factory projects, mainly in the automotive sector, such as the Jaguar Land Rover new engine facility in Wolverhampton.

Total new work orders remained unchanged in the first quarter of this year when compared to Q1 2012, although the figure was down 10% to £10.8bn (in 2005 constant price terms) on a quarterly basis. 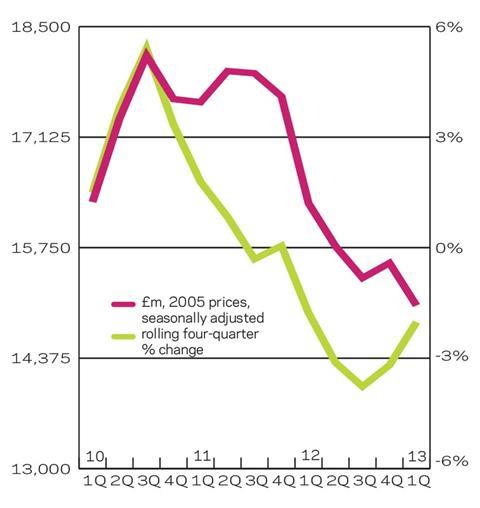 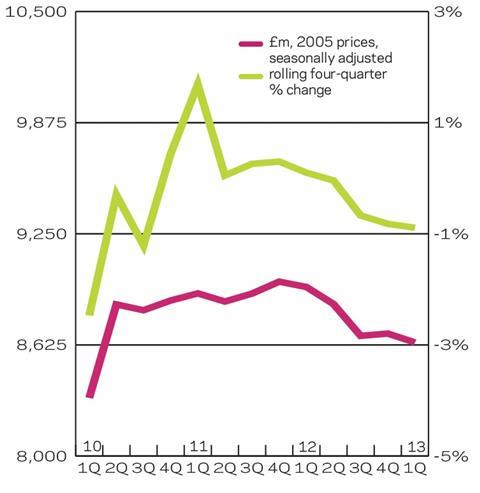 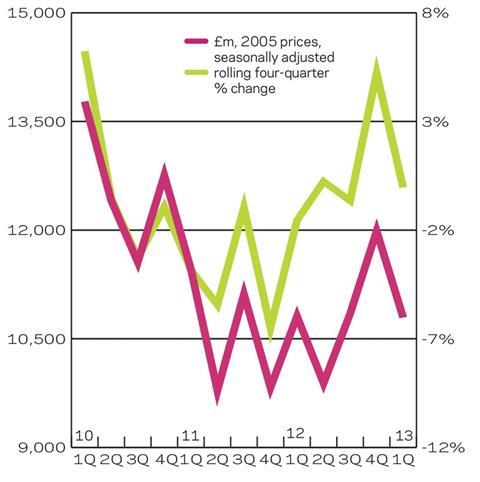 The chart (above) outlines sectoral forecasts for 2013-2015. As has been the case in recent years public non-residential is expected to continue its decline (10%), as work on the now cancelled BSF programme continues to complete. Infrastructure and private industrial construction should both perform well in the forecast period, at 7% and 8% respectively. The latter is being boosted by major projects such as the second Jaguar Land Rover factory and the London Gateway Logistics Park, as well as future developments like the “world logistics hub” alongside Manchester airport.

Output in seven out of 11 regions and devolved nations was lower in the first three months of 2013 than it was in the corresponding period of 2012. The East Midlands, Greater London and the South-east regions all saw double-digit declines. However, four out of the 11 did manage to post modest growth, Scotland and the North-west being the stand-out areas with increases of 4.9% and 4.2% respectively.

The repair and maintenance (R&M) sector saw growth in six out of 11 regions and devolved nations. On an annual basis the North-east and Wales saw the strongest increases of 19.5% and 17% respectively. Yorkshire and Humber, the East Midlands and the South-east all suffered double-digit declines.

New work orders have been volatile recently at a regional level and the first quarter of this year was no exception. Yorkshire and Humber, the East Midlands and the East of England all saw sharp declines of 76%, 85% and 36% respectively. In contrast, new work orders did see considerable growth in Greater London (23%), the West Midlands (37%) and the North-west (33%).