In 2014 total construction output stood at £121.42bn in 2011 prices. This represented an increase of 7% on the previous year’s total. It also fell in line with its average level in the decade preceding 2014. On a four-quarter moving total basis output grew for the sixth successive quarter in the final three months of 2014.

According to the Office for National Statistics’ second estimate, GDP in final quarter of last year grew by 0.5% in real terms on a quarterly basis. Growth in the year to Q4 was also unrevised at 2.7%. The latest figures confirm the strength of the economic upswing but highlight high dependence on household consumption. However, low inflation, rising incomes and labour market strength suggest consumer spending will remain robust this year.

The public and private housing sectors performed well in 2014. The output in the former rose 27% year-on-year to £5.63bn, thereby reaching its highest total on our historic data series (1997). Much of this upswing can be attributed to strong growth in new orders between 2009 and 2013, as social housing providers became more creative in sourcing new streams of finance as public expenditure fell to record low levels post-recession. Despite activity reaching a new peak in 2014 orders collapsed by 50% year-on-year, suggest that overhanging debt may be a growing issue. Output hasn’t show any sign of falling yet, but this is to be expected given the lag between when social housing providers receive funding, decide where to allocate it, and only then look to begin work on site.

Private housing activity also rose sharply last year, increasing 22% annually to £20.9bn which was its highest level since 2007. In contrast to public housing orders the private housing ones increased for the fifth successive year in 2014, suggest that the sector may remain buoyant for some time yet despite many key indicators pointing towards a slowdown in the market. This notion is supported by falling starts in the second half of 2014. But contrasting factors such as low interest rates, and further government incentives such as the reduction in stamp duty should support growth for the remainder of this year.

The industrial sector also saw a robust expansion to its output in 2014, with a 17% annual increase to £3.65bn. It’s encouraging to see that much of the growth has come from domestic investment, with support from a strengthening manufacturing sector. This has been notable in the warehouses sub-sector as opposed to the factories one. Despite this, falling exports will remain a risk as eurozone demand continues to flounder; this effect will likely be compounded by a weaker euro in light of the European Central Bank’s latest round of quantitative easing, in the hope of avoiding a euro area-wide recession.

Commercial activity flattened out in 2014 at £22bn. However the sector did see strong growth in new orders in that year driven by strengthening demand in the offices and leisure sub-sectors.

The infrastructure and public non-residential sectors were the only ones to see a fall in output last year. The former was down 1% to £13.22bn, although activity is still at a high level, with large scale multi-year projects on-going in the energy, water and rail sub-sectors. The public non-residential sector saw its activity fall 3% to £9.14bn, which was its lowest level since 2008. The health and schools sub-sectors have continued to struggle, although the outlook for universities remains brighter.

Total new work orders were flat in 2014 at £48.1bn in 2005 prices. At the sector level the majority of new work ones experienced an increase in orders, with the commercial and private housing sectors leading the way. Infrastructure and public housing were the only ones to decline on an annual basis, with the latter falling to less than half of its level
for 2013. 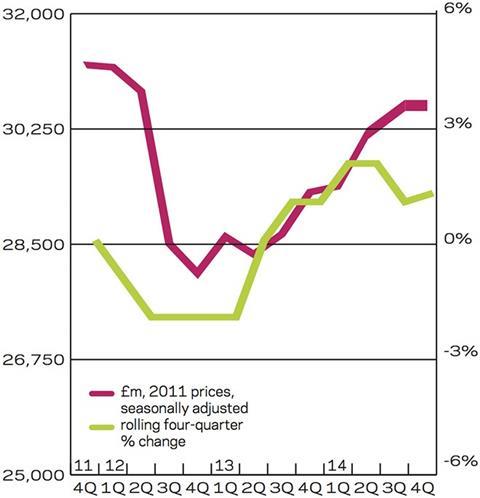 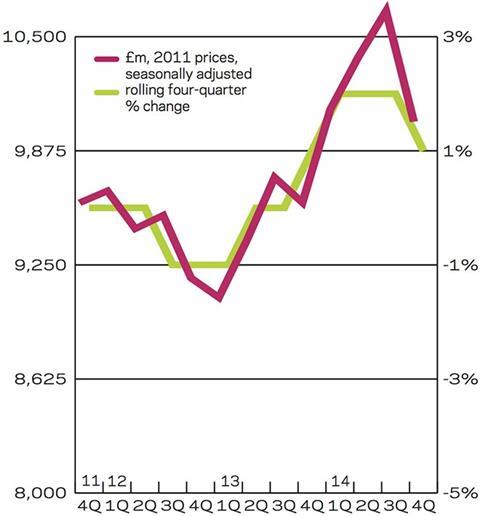 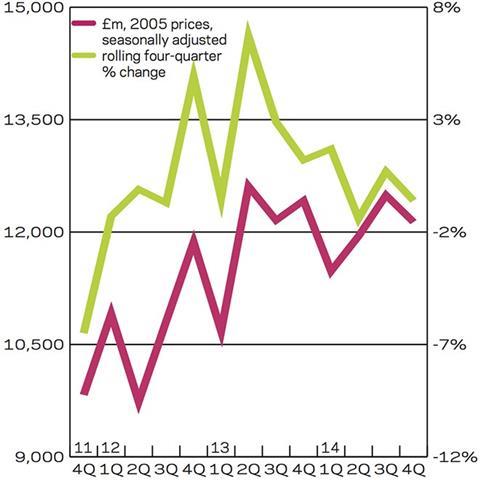 We have forecast growth across all of the new work sectors on an annual average basis with the exception of public housing which is set to decline over the forecast period. 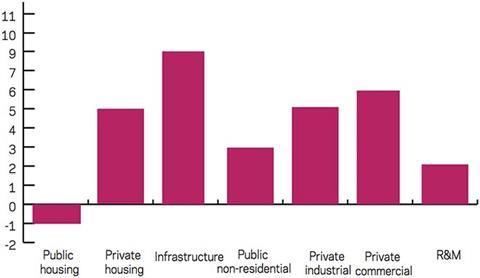 Output in the final quarter of this year increased in eight out of 11 regions and devolves nations, when compared with the same period a year earlier.

Repair and maintenance (R&M) output grew in eight out of 11 regions and devolved nations, over the same measures. Wales and the South-east saw the sharpest increases on percentage terms.

Only five out of 11 regions and devolved nations saw their orders increase on an annual basis in the last three months of 2014. London and Scotland made the largest gains.