At full tilt: how Manchester velodrome got a new track in record time

When the British national cycling team headed off to Australia in March for the Commonwealth Games, they started a clock back in Manchester for a construction team to replace the wooden track at their velodrome before they returned. 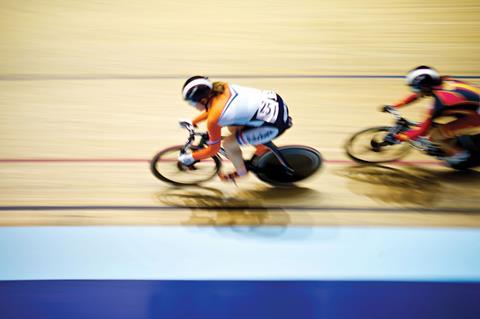 “The project programme was determined by the elite cyclists of Great Britain,” says Barney Harle, head of major projects at Manchester city council. He’s talking about the replacement of the banked wooden track at the council-owned Manchester Velodrome – also known as the medal factory and the home of British cycling. “We thought we’d need 10 weeks for the works, but we only had a nine-week window between the last cyclist leaving for the Commonwealth Games and the track being back in use as a training facility,” he says.

Wooden velodrome tracks should be renewed every 10 years, because their surface becomes ingrained with oil, rubber and dirt, so this replacement was the critical element of a £1m revamp of the 20-year-old facility.

Having such a short time in which to complete the works meant that preparation and early engagement of the team were critical to the project’s success. “We started planning about 12 months ahead and appointed [construction services company] ISG on an NEC 3 Option A contract about six months ahead to allow it time to plan its works,” Harle explains. Then, the sprint was under way. 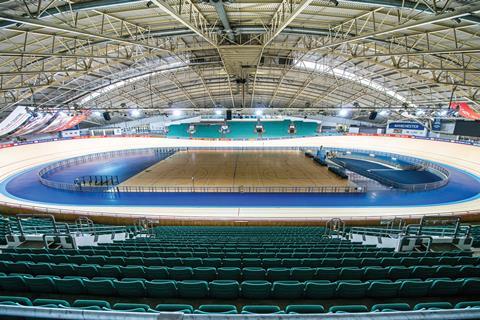 ISG was engaged through the North West Construction Hub framework. It partnered with Velotrack, a third-generation, family-run German velodrome builder and track replacement specialist with which it had worked when replacing the same track 10 years earlier.

The tight schedule this time around meant the work during the lead-up to starting on site was crucial. “We had 15 weeks to plan the project in detail, which was longer than the time we had on site to deliver it,” says Neil Walker, ISG’s framework director for the North West Construction Hub. Consequently, Harle says: “We made a commitment to pay ISG to do the planning and to pre-order materials so works would commence on the morning of the first day we had access.”

Some 55,000m of Siberian spruce, looped around 177 times, were used to form the replacement track. This is the ideal material for the context, because in the Siberian climate trees grow slowly to produce a dense, grained timber that is relatively knot-free. It was supplied from Germany in planks measuring 40mm x 40mm in section and 6m in length, and kiln-dried to a moisture content of 12%. One of ISG’s most urgent tasks was to get hold of the timber.

“The lead time meant it had to be ordered before Christmas to ensure delivery the week we started on site,” Walker says. 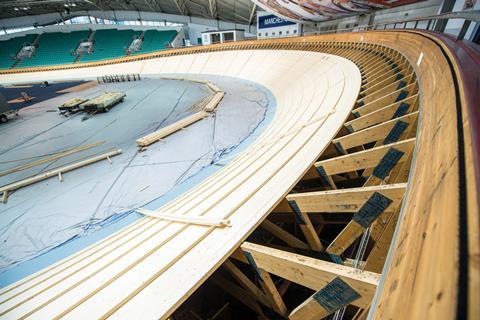 The dished-oval track has a circumference of 250m (measured using the black line painted close to the inside edge of the track). It is banked at an angle of 12° on the straight sides and a maximum of 42° on the turns. The track is supported by timber trusses, similar in appearance to those used to support a pitched domestic roof. These are  spaced approximately 500mm apart, a distance that varies according to their position beneath the track and the height of the banking.

In advance of the mid-March date for starting on site, ISG checked the track’s undercroft and inspected its supporting timbers to make sure that they were sound. “We surveyed the trusses in advance so we knew we would not have any issues with them when it came to replacing the track,” says Walker.

“Detailed programming was made easy because we knew each loop took 50 minutes to install, so it was easy to work out how long it would take them to reach the top”

ISG was also responsible for replacing the blue resin coating on the oval centre of the track. This had to be sanded back to bare concrete by flooring specialist 4m Floors UK before it could be repainted. To ensure there were no issues with dust before the programme commenced, ISG trialled the coating removal process late one Sunday evening.

On 26 March, work on site commenced. One of the first tasks was to move the pallets of timber into a storage area at the centre of track. The velodrome was set to a constant temperature and ISG installed monitoring stations around the hall to make sure this was consistent throughout the space. “Timber swells and shrinks depending on humidity and temperature, so it was important the velodrome was set at 25ºC, which is the event condition, to ensure it was properly acclimatised,” Walker explains. While the timber was acclimatising, the resin coating was stripped from the track’s inner concrete oval.

Once all the preparatory work was complete, it was over to Velotrack to strip out the old timber track. Track removal began on 9 April and involved dividing the track into small sections by cutting it radially between each pair of trusses. A ratchet-strap, similar to those used to tie loads onto truck trailers, was used to pull the sections into rolls from the top of the truss downwards. 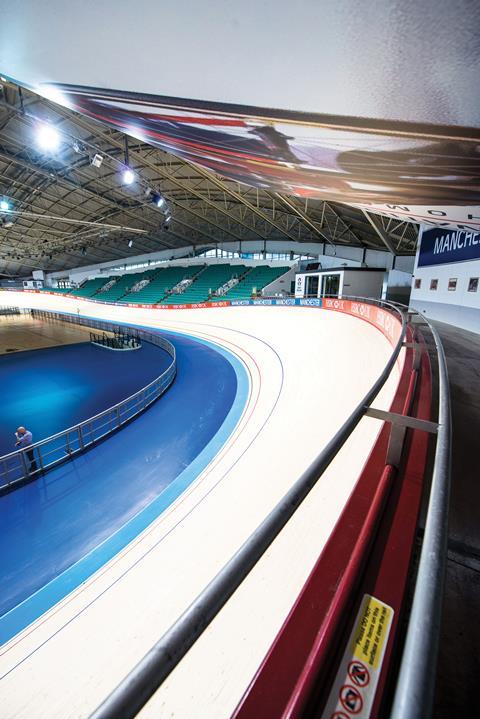 The track was completed as planned with just 15 days

All the timber was removed except for the narrow strip of pale blue boards on the inner edge of the track, which remained. Known as the “cote d’azur”, this allows cyclists to transition from the flat concrete to the steeply banked timber track.

The rolled-up sections of timber were given to Emerge, a community wood recycling organisation that is offering the public the opportunity to buy “a piece of cycling history”. Unsold pieces will be reused either in furniture or else in construction projects.

It took Velotrack just over three days to complete the strip-out. The exposed tops of the trusses were then inspected for damage and any remaining nails were removed in preparation for the new track. Packs of acclimatised new boards were then placed strategically around the inner edge of the banking track in preparation for the track installation. “The operatives arrived on a Monday morning and by late Thursday they had already started to put in the alignment boards ready for the new track,” Walker says.

On 16 April, installation began. The entire 55,000m length of timber was fitted by just three operatives. They began with a straight section of track at the bottom of the banking. The first few boards were some of the trickiest to install, because they had precisely angled timber wedges placed beneath to smooth the transition from the cote d’azur to the fully banked section of the track. “A man with a bucket of nails, a hammer and a box of wedges started the installation by aligning the first timber,” says Walker.

“It’s a very efficient process, even through it’s all done by hand”

Once the initial pieces were in place, two operatives continued around the track installing a complete circuit of the boards. They were shadowed by another worker whose task was to take each piece of timber from the pack, inspect it to ensure it was blemish-free, then place it radially on the track ready for use by the fitters on their next circuit. It is a process that was repeated again and again, as the operatives slowly progressed up the banking.

“Detailed programming was made easy because we knew each loop took 50 minutes to install, so it was easy to work out how long it would take them to reach the top,” Walker says. The 177 loops of track are slightly fewer than for a new velodrome because of the retention of the original cote d’azur beneath. 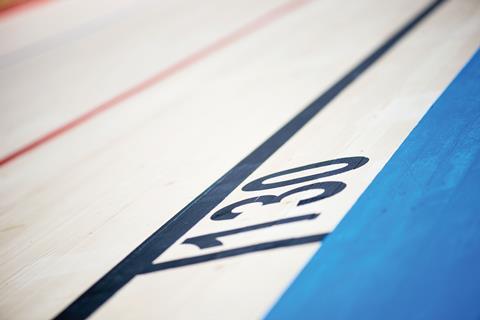 The boards were held in place by over 250,000 nails. Each was hammered by hand into the side of a strip of timber at a 45° angle. This system is designed to ensure that the riding surface is clear of nail heads and each board is butted tightly against the one below. The pattern alternates with each band of timber installed: the first loop of planks were nailed to the trusses; the next were nailed to the planks installed just before; the next were again attached to the trusses, and so on. “It’s a very efficient process, even through it’s all done by hand,” Walker says.

As the angle got steeper, the operatives temporarily nailed horizontal bands of battens to the surface of the track to act as footholds. The final circuit was installed just 15 days after the first plank.

Once the temporary battens had been removed, the track was given a final buff using a nylon brush, to remove any surface imperfections. Velotrack added the track markings and had the track homologated by cycling body the Union Cycliste International.

One of ISG’s final tasks before crossing the finishing line was to apply a new blue resin coating to the in-field area before handing the refurbished velodrome back to British Cycling on 28 May, as planned.